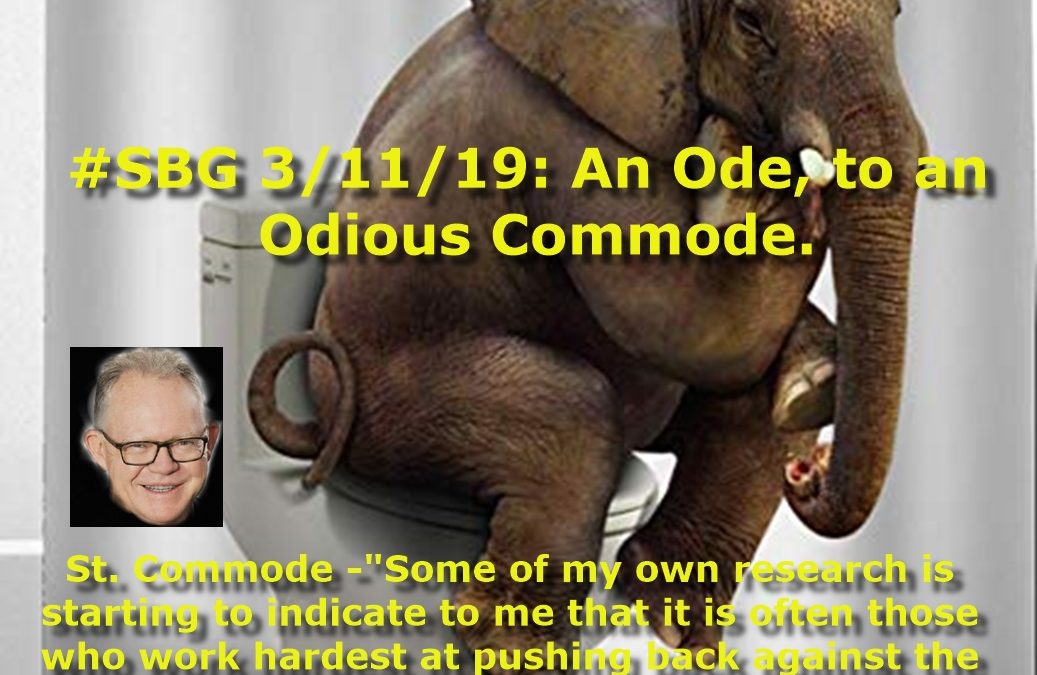 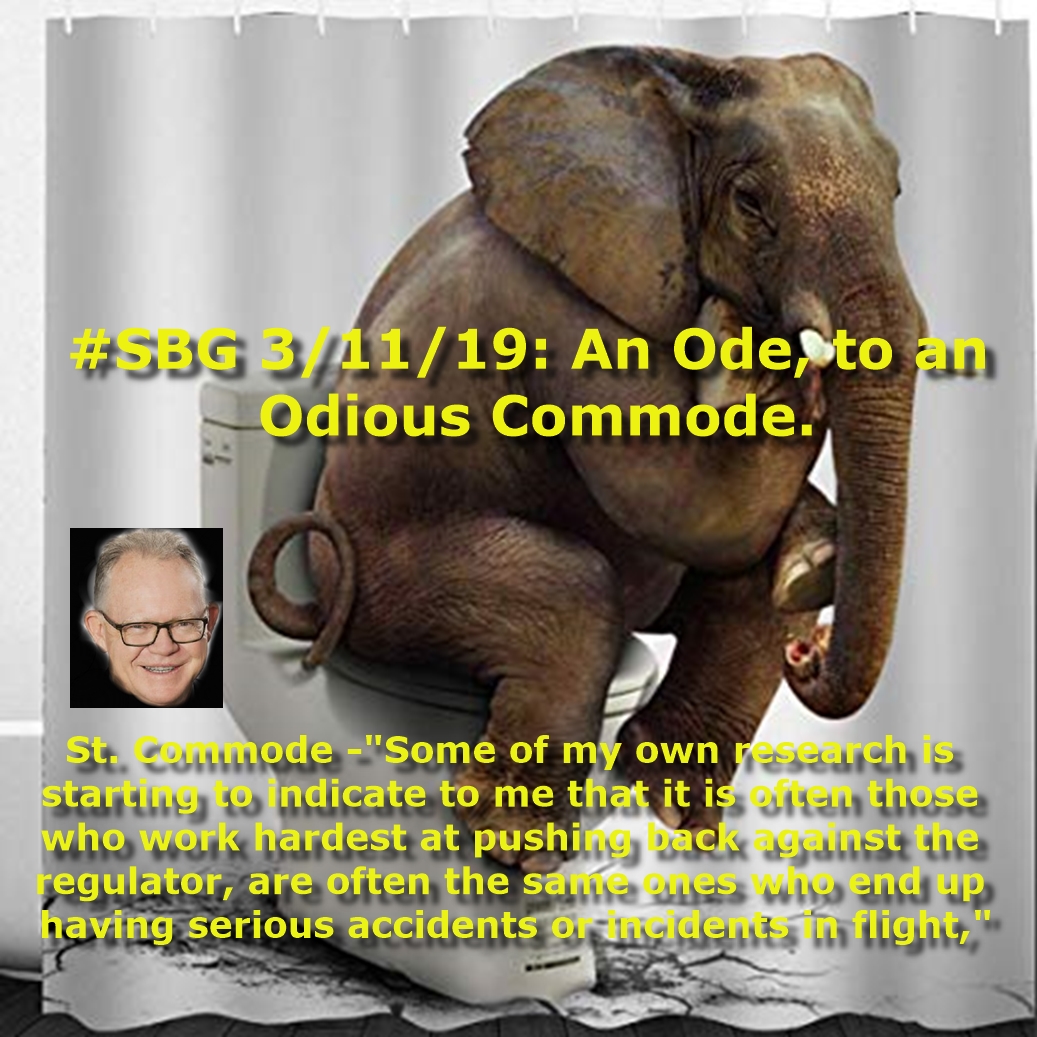 An Ode, to an Odious Commode. – AP forum version.

Aye, it’s easy enough to take the Mickey out of St. Commode’s new found devotion to the arcane, metaphysical arts. Many get lured into mystical cults, ritual worship and a sound belief in the ‘unseen’. It could, at a pinch, be true of all religious and quasi religious sects. It is a free world and folks are, IMO, entitled to believe that which pleases ‘em best – privately, quietly, while doing no harm. All well and good in theory at least. But never, not ever, forget that millions have been slaughtered in the name of ‘belief’. The major religious groups amongst the first offenders, see history 101. Quaint little beliefs, like Grand Mama’s tea leaf readings guiding your path; or, the daily horoscope published in the local rag influencing your pick for the Melbourne Cup do little harm to man nor beast. My first reaction to St. Commode’s venture into the light fantastic produced a ditty – “An Ode to the Odious Commode”. Still here on the screen; I shall save it for the BRB. 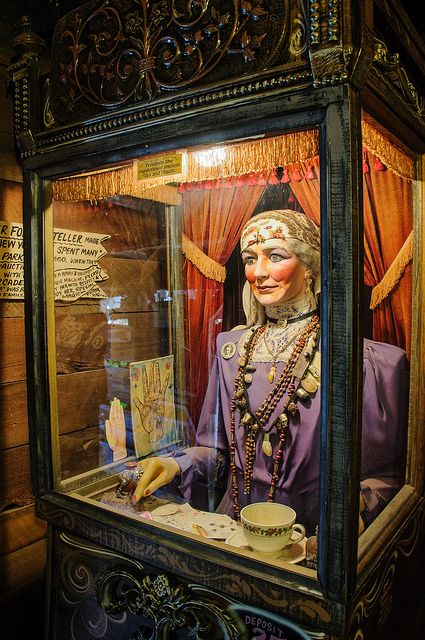 “I have hitherto confined my investigations to this world,” said he. “In a modest way I have combated evil, but to take on the Father of Evil himself would, perhaps, be too ambitious a task.” ― Arthur Conan Doyle, The Hound of the Baskervilles.

Like Holmes; I too shall remain with my feet firmly planted on Mother Earth, although it is hard to gainsay that ‘witchcraft’ affects all those who pass through the CASA portals and into the executive dunny. There have been some notable transfigurations – Boyd and Taylor for example. Lions into Lambs – hypnotherapy, voodoo, or Kool Aide? No one knows for sure, but something strange happens in there. Aye, ‘tis a mystery.

The fraying of St. Commode’s famous, fragile temper and the load of old cobblers he spouted to the converted of the RAAA is, IMO, a reflection of three structural failures within the ‘safety’ system; Bipartisan box ticking, ministerial under sight (wool blind) and board oversight. Baffled by the ‘mystique’, bone idle and feared of getting any blood on their collective hands are powerful motivators. The notion that ‘they’ don’t understand the deep complexity of ‘the game’ feeds their collective insecurity, and lack of knowledge. Rendering ‘em moribund and useless to all practical purpose. This, aligned with a reluctance to admit that CASA is a failed system, that aviation law is an ass; and an abject terror of tackling ‘the beast’ of Sleepy Hollow, have allowed CASA to develop into a self delusional, self destructive monstrosity. We know it, the world knows it – and yet there it sits; feeding on ministerial ignorance and paranoia. 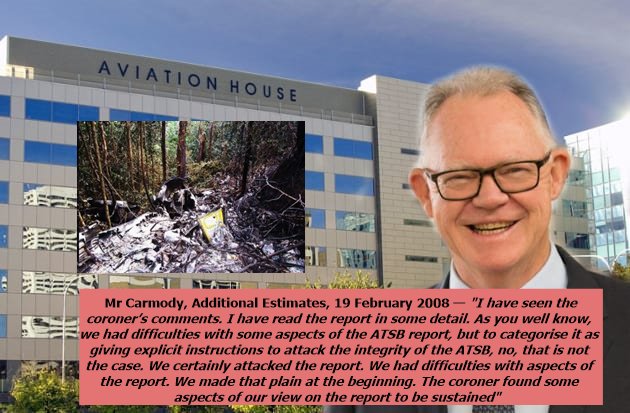 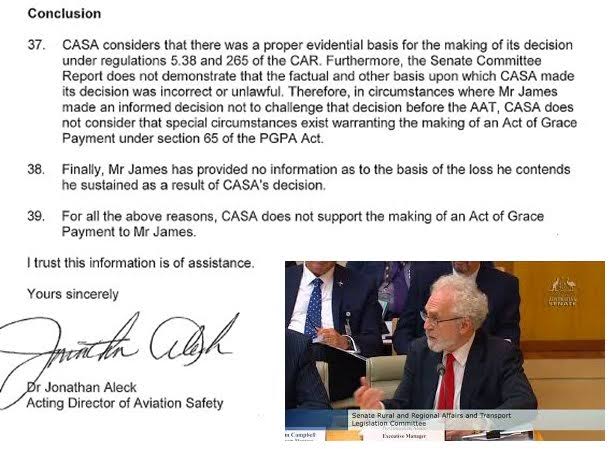 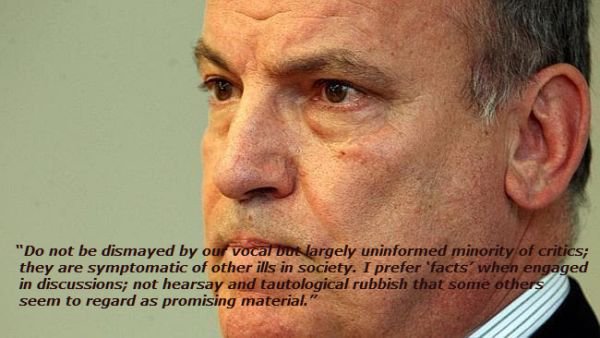 “To that Providence, my sons, I hereby commend you, and I counsel you by way of caution to forbear from crossing the moor in those dark hours when the powers of evil are exalted.” ― Arthur Conan Doyle, The Hound of the Baskervilles

Resident evil exists within those halls of shame; industry knows it, up close and personal. Expecting industry to come out of it’s shell is a seriously big ask. It cannot; nay, dare not, risk ‘the business’ and the expensive, hard won approvals; not to mention becoming a target. A deep, difficult tangle awaits those who dare rock the boat and tell the latest inexperienced FOI to bugger off, go boil his fat head along with his notions of what is ‘the best’ way forward. Fear rules.

“Mr Carmody said there were several tragic examples in the last two years involving pilots with “a history of poor judgment and a history of ignoring regulation or skirting around it”.

This is, unfortunately, true of a small minority. On the roads, in the home, on the streets, on a work site, – there has always been an element which defy ‘the rules’. Aviation is no different, except in one way – in nearly every other area it is possible to mount a defence against the alleged offence. CASA regulation, enforced by Strict Liability removes that option.

LB – “Mr Carmody’s comments are, in my view, merely an admission of the abject failure of CASA to make any positive difference.

Cooper – “Since we now have “proof” that criticism of the regulator is an indication that a plane crash involving fatalities is an imminent certainty, then CASA is justified in taking “safety action”, in whatever form it decides, against those who are perceived as insubordinate.

To ensure transparency, the “safety action” must be in accordance with private research carried out by whichever individual CASA Officer is involved.

There’s the rub. Despite the money, time, effort, fantasy rule making, wet dream philosophy and world best practice being freely available; CASA depend on ‘Strict Liability’ to impose their ‘safety’ efforts. Which, standing alone, is just a deterrent to honest folk, unless the ‘technical’ crimes catches them unaware. 101 in a 100 zone is, a breach; no excuses, no defence say’s CASA. In the real world however, as any honest Bobby will tell you, to secure a conviction, even with a confession and evidence to support, is a difficult task. CASA however can simply waltz in, declare you and your operation ‘in breach’ close you down and then wait you out, until money and patience have expired. Even when pushed into the AAAT – the fact that ‘you’ dare to challenge the ‘expert’ CASA is always first and foremost in the mind of lay people. Evidence you cry: proof;– well, the serious student would read some of the AAT transcripts and learn to be afraid. Be very afraid: what CASA can do with a bent paper clip or clerical error would make the Angels weep.

Is this St. Commode’s last hurrah? Is the anger deeply hidden behind the Cheshire Cat smile surfacing? Does the bully in the expensive suit emerge? Making a monkey of a minister is not a clever move. If the current incumbent minister (whatisname) through CASA tainted, masked control and back stabbing ‘advice’ has been led into murky waters, making a government uncomfortable, then heads will roll. Sure “off with the Commode head” is a fair call – but if you think Karma is a bitch – you have yet to meet her sister – the Lernean Hydra.

Before you M’lud are three pertinent, current cases for consideration. Angel Flight, Buckley and Essendon. Between those pages you will find unimpeachable evidence of just how far ATSB and CASA have travelled down the road to Perdition. I say, any fair minded, unbiased, unafraid, detached, examination of these cases would shock this nation and bring on a ‘fair-dinkum; inquiry. No holds barred.  I dare the minister to open the gates and allow open hearing of the case against the regulators actions. Open the gates to the truth, heard without fear or favour. I say the government who does this will win the hearts and minds of the public; the government who live, deep in denial will be shamed by the disgrace and condemnation if they do not. If there’s nothing to hide, then why not confront industry and individual complaint. Pilot error is not a valid argument for ASA, ATSB or CASA to maintain the fiction of the ‘mystique’ of ‘safety’ – whatever the Hell that is supposed to be. D8 Airvans grounded on a mere suspicion – 737’s?  – Oh, well what’s a cracked ‘Pickle’ or two’ between mates. Only keeps the wings on FDS; irrelevant.

No amount of smoke, mirrors, legal legerdemain or arcane arts can deny the naked travesties; nor hide the truth. Inquiry followed by grass roots up reform is the only remedy for a sick and dying industry. For if the truths of these three matters becomes public knowledge, before the government takes positive action – it wont just be St. Commode in a tumbril; wending it’s merry way to the public stocks: will it. Think on……….

“An ode, to the odious commode”. I am sorely tempted. (Thinks) perhaps later, after an Ale and a preview with ‘educated’ company. Meanwhile, DT plays a tune, I must attend the dance, lest I too end up in the tumbril. 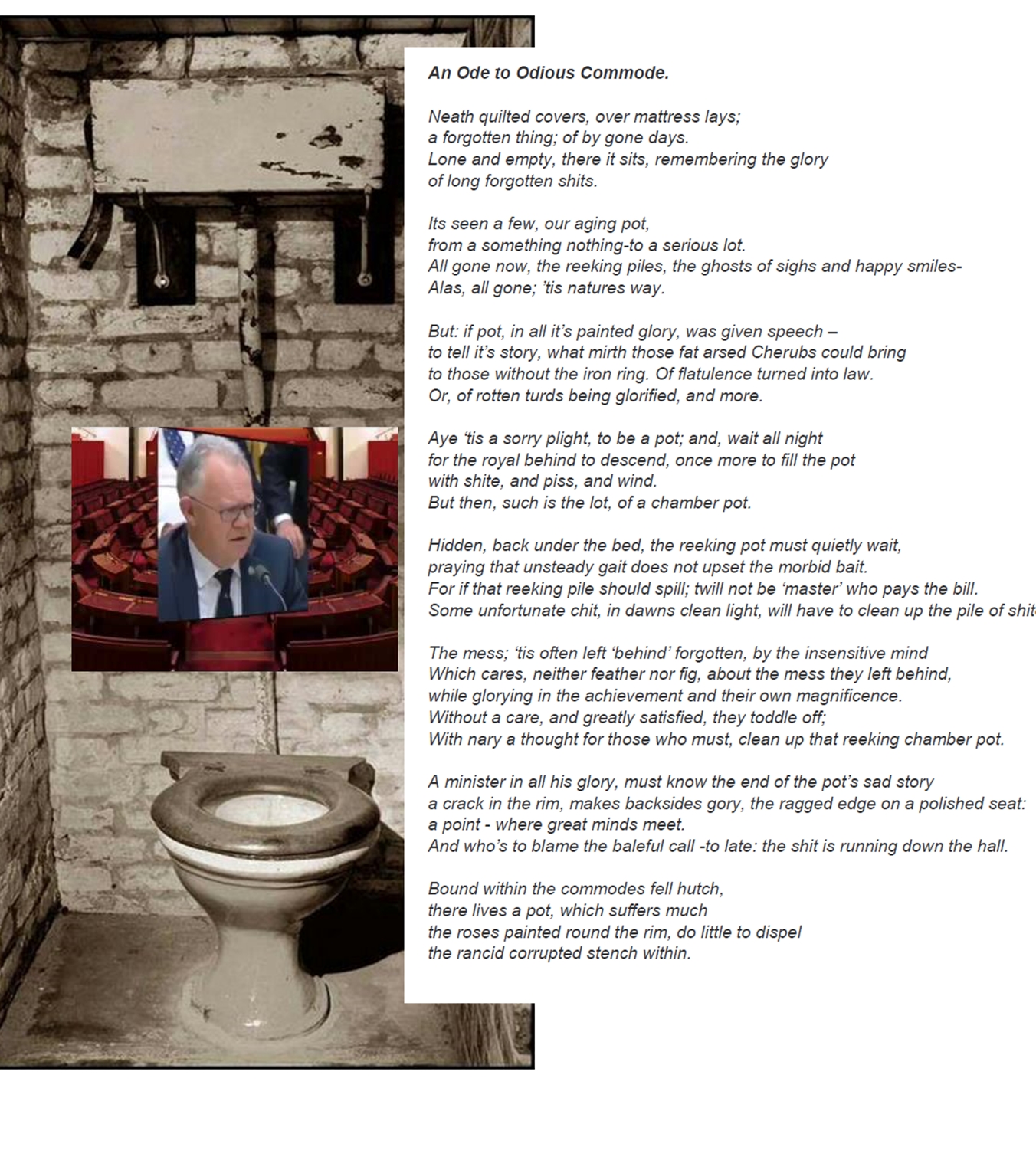