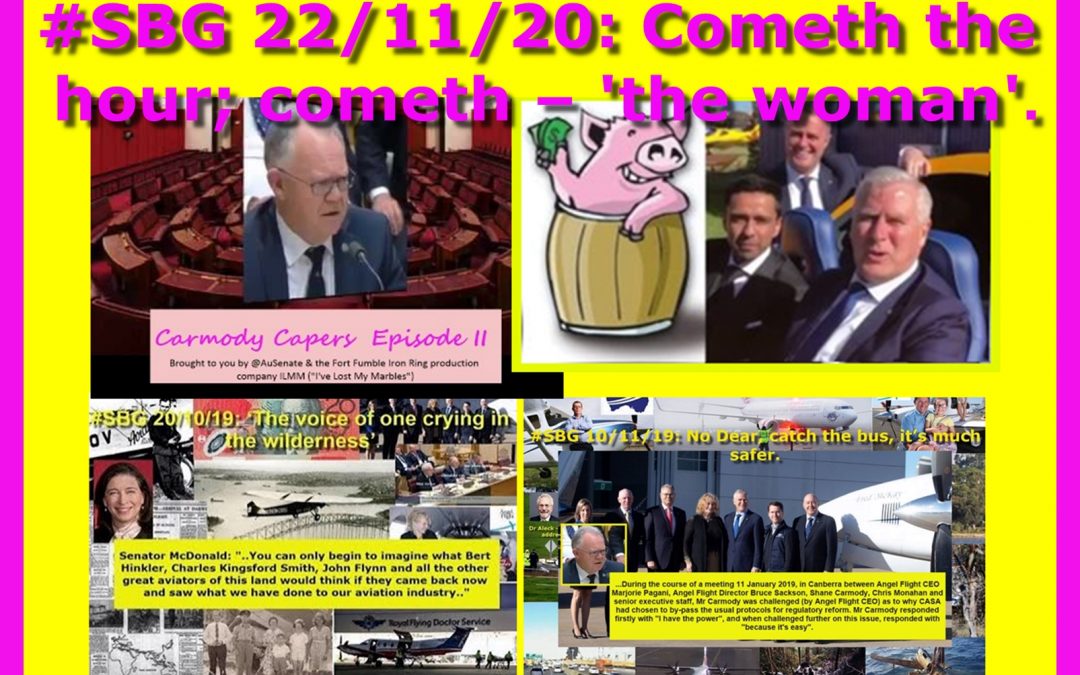 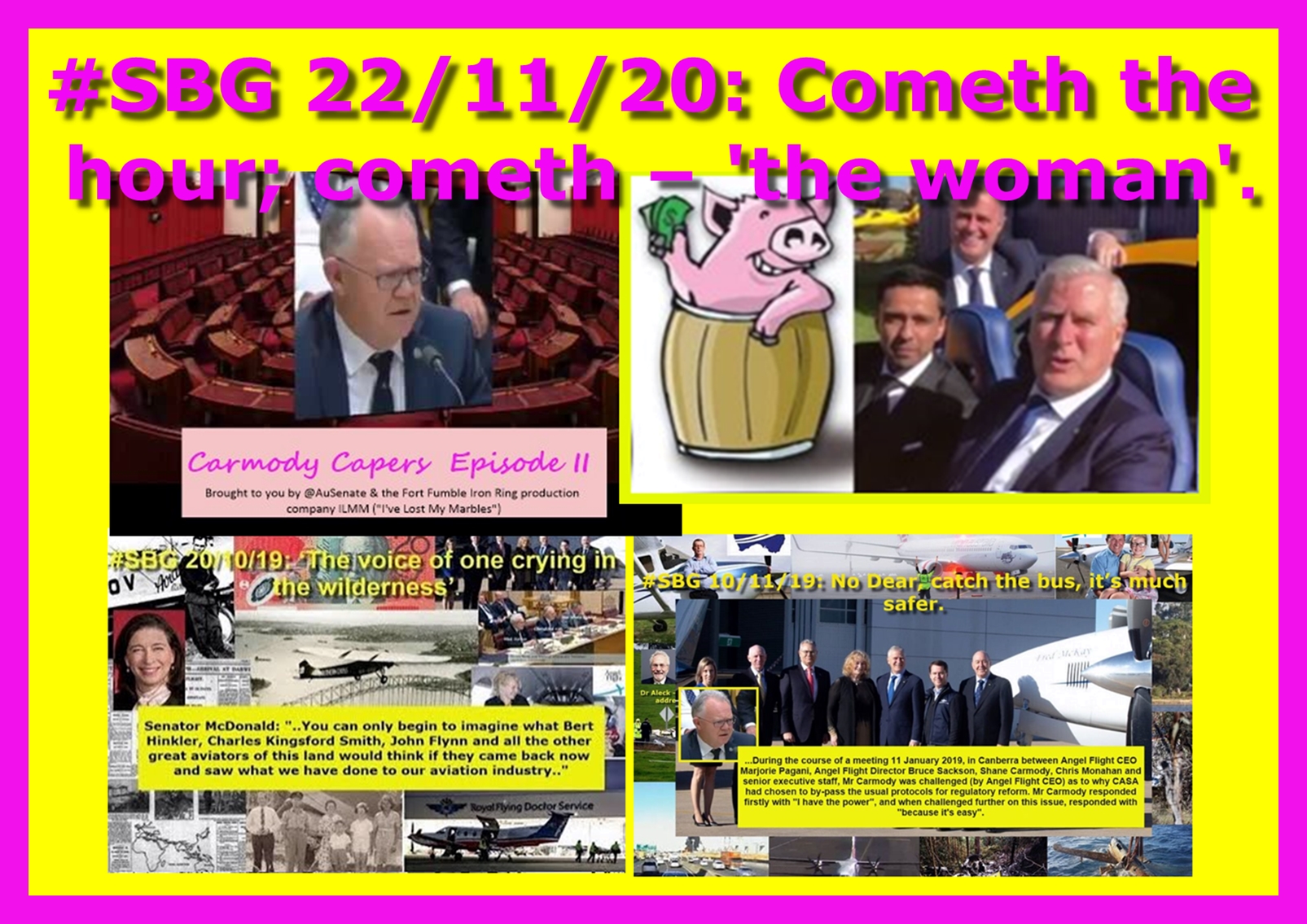 ‘We’ – the BRB and the IOS will be working through the Hansard this week; in depth and close in. There is just too much for a Sunday twiddle to adequately cover, in one hit – so; FWIW, herewith the SBG introduction to what was – a major, milestone event.

In almost every man’s life; somewhere, there is ‘the woman’. Even my long time companion Sherlock Holmes had one (although never admitted) – and, I digress – already. 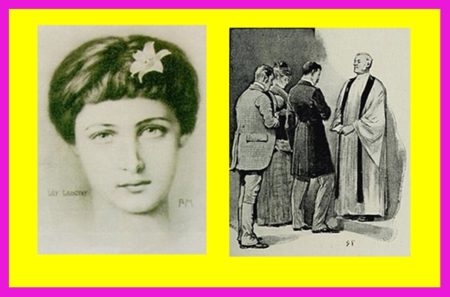 “And yet there was but one woman to him, and that woman was the late Irene Adler, of dubious and questionable memory.”  (ACD).

There is a great  ‘much’ to consider from the Nov. 20, 2020 Senate inquiry. A great much, if you are not tied to the CASA apron strings; or have a Crown Minister neatly tucked away in your back pocket. We are, of course, referring to the latest episode in the long running series of everyone’s favourite program; the Senate Estimates show. Many episodes have we watched (thank the Gods without advertisement) and wandered off to contemplate how the CASA may wriggle off the hook; it has been a fascinating series. But, like Holmes and Moriarty – it had, sooner or later, to come to a climax. Bad guy dead – Holmes survives. But; was ‘Friday’ for real or just more political ‘delay’ and obfuscation? No matter, we shall proceed as though it was ‘fair-dinkum’. 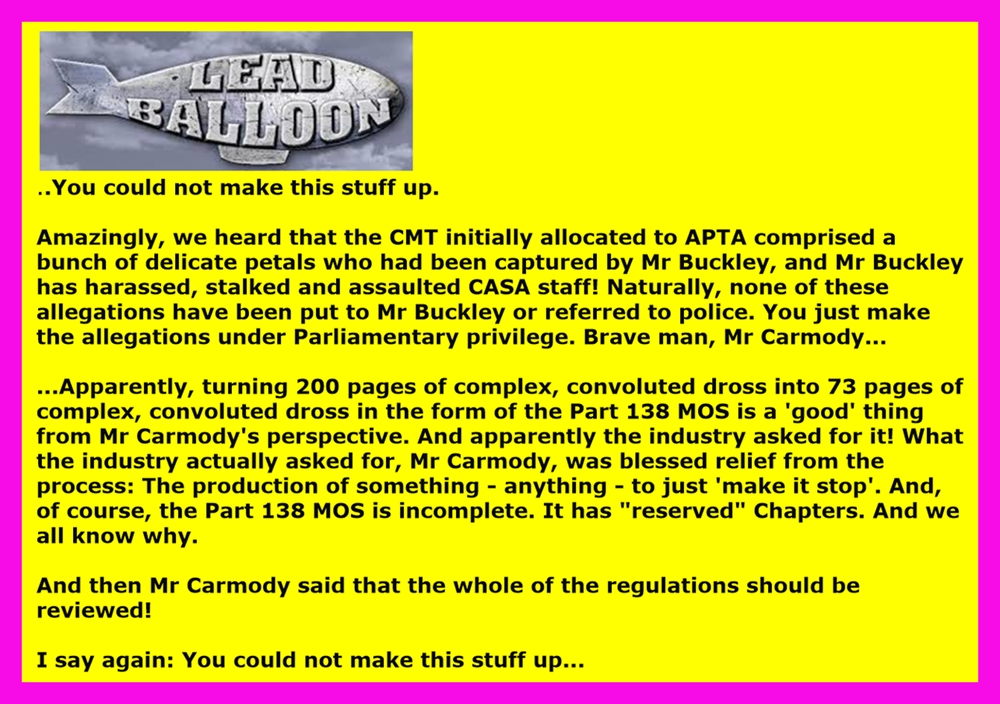 The question now, on everyone’s lips is, who survived? Which, in a work of fiction, is the ‘dramatic’ climax; in real life – well, not so much. You see, in real life, the villain escapes with a golden parachute; no police dogging his heels and enough money in the back pocket to fund a life more comfortable and easy than any working pilot or engineer could ever dream of achieving – all courtesy of a ‘grateful’ tax paying public who stumped up about $5,000,000 (to St Commode) to see themselves ‘safe’ when airborne. Bloody silly notion ain’t it. But, when bullshit baffles brains, fear paralyses a minister, a government would be shut of all responsibility – creatures like St Commode gain ascendancy – and they thrive. But, down to Brass tacks now. – What exactly happened on Friday 20/11/20?

Only my opinion, but the dismantling of the CASA stranglehold began with Hood and the Angel Flight bun fight. Sen McDonald was, as was every thinking person, outraged by the treatment AF, was handed by the arrogant man of many outfits – head of the ATSB – Hood. Then, to add insult to injury – CASA weighed in with their very own ‘unrealistic’ uneducated, unhelpful knee jerk. A legally based liability (self protective) response. That, IMO began the crusade to ‘sort out’ the operational stupidity, deeply entrenched within the CASA ‘legal purview’, under the direction of St Commode. He who decided it would make life ‘safer’ for country folk (with Cancer etc) who need to get to city hospitals to drive – not fly (for free).

Biggest load of bollocks ever produced and – a tipping point. From that moment on – CASA, and it’s witless minister, became a marked target. You cannot give a lady of McDonald’s calibre a weapon, ammunition and a reason to use it. Yet; used it she has, with great effect and in the most splendid fashion. Bravo.

What people like Aleck and Crawford do not realise is that there are smarter, well intentioned, honest folk out there, with ‘real’ horsepower, proper experience and ‘goodwill’ who – in real terms – run this nation. Here’s a question from an unprecedented moment in the annals of aviation history. (Paraphrased due to a lack of Hansard):-

“Can we have an immediate change (an instrument) which allows the Chief pilot of a commercial helicopter operation to do the annual proficiency check on his own pilots?”(Labor)  “Yes” says Patrick (independent) ; “Agreed” says the Chair (National) and so, motion carried, bipartinsane – and unanimous. – it makes sense. Does the Senate committee have ‘the legal juice’ to make it happen? After Friday that becomes nugatory. Why? Well if they make it happen; (and they will) it takes CASA back into a realm where ministerial dictates become a very real (scary) force. This useless WWW ministerial facsimile will wilt; and will tell CASA to ‘get it done’. Because if he don’t – a higher power will step in and put a rope on him and his CASA ‘best mates’; that’s why. No options and less choices. (P7 added) It’s also worth tracking the Patrick question relating to ‘the Act’ and the manner in which the amendment to it has been ignored; MTF on that little item.

That aside; there was, on Friday, two voices which carved a great slice of truth from the CASA rump; Messrs McDermott and Hurst. Clarity, honesty, expertise, experience and knowledge – all untapped and ignored by the so called ‘experts’. I am going to stop here – it is a big subject – but; and it is a great big BUT, if ‘the qualified experts’ were allowed to run matters aeronautical, how much better off would we all be: yes,  the minister included.

Then is St Commode just the latest victim of the Kool-Aide’ fountain? There’s a long daisy chain before him – all victim to?– The Bard (as always) explains it best – for ’tis a CASA ‘legal’ safety fantasy we attempting to explore.

“Oberon sends his merry servant, Puck, to acquire a magical flower, the juice of which can be spread over a sleeping person’s eyelids to make that person fall in love with the first thing he or she sees upon waking. Puck obtains the flower, and Oberon tells him of his plan to spread its juice on the sleeping Titania’s eyelids.”

Now then; to a really serious problem; to which I need an answer, for I cannot fathom one. OK – I must joint and fit a ‘rail’ across the front of a chest of drawers’ made from American White Oak. I carefully (for it is a front piece) measure, mark and cut one end – too big is the hole for the joint??? Then, I equally carefully measure, mark and cut the other end – same joint – too small. I cut out the too small pieces and they fit – but exactly – into the too large part at ‘tuther end? Got me beat – it’s not as if they are the first two joints I ever cut. No matter. My tree has flowered, full of birdsong, the wind is fair, the night cool, the dogs impatient now. But, Friday deserved a few more words and a lot more support; for ‘the woman’ who may yet save an iconic Australian industry. MTF – safe bet.