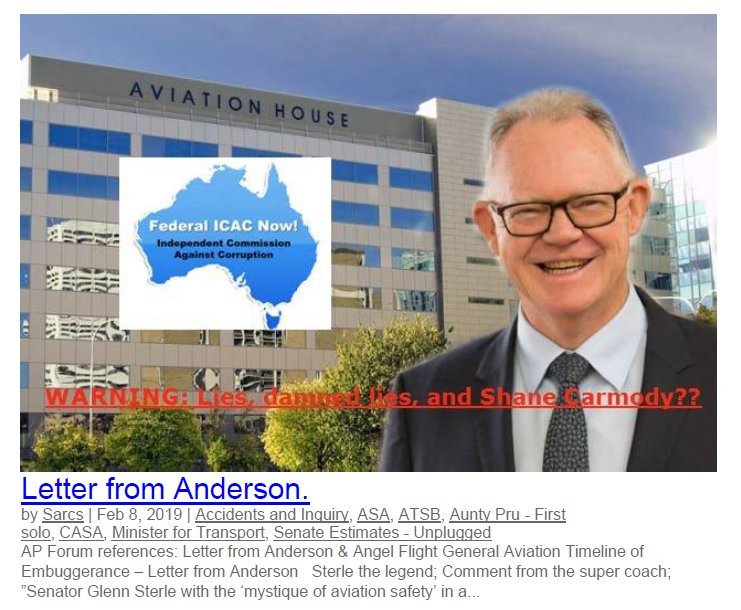 In a rare outburst, Civil Aviation Safety Authority chief Shane Carmody has hit back at critics of the regulator who claim CASA is trying to destroy general aviation in Australia.

Addressing this week’s ­Regional Aviation Association of Australia conference on the Gold Coast, Mr Carmody outlined the progress CASA was making in several areas, including drones and a reduction in paperwork.

He also tackled head-on ­issues that had put CASA in the headlines, such as community service flights, the grounding of the Boeing 737 Max and much more briefly, the G8 Airvan after fatal crashes.

Mr Carmody said as a regulator, criticism went with the territory.

However, he rejected any suggestion CASA’s actions were more of a hindrance than a help to the aviation industry.

He said any suggestion CASA was trying to kill off, shut down or destroy general aviation was “ridiculous and patently untrue”.

“Some of my own research is starting to indicate to me that … those who work hardest at pushing back against the regulator are often the same ones who end up having serious accidents or incidents in flight,” Mr Carmody told the conference of airline and airport operators, and others in regional aviation.

“We have had pilots who were constantly trying to get around the rules to suit themselves.

“They criticise CASA (and others) at every turn and they end up killing themselves and others.” Although he refrained from naming names, Mr Carmody said there were several tragic examples in the last two years involving pilots with “a history of poor judgment and a history of ignoring regulation or skirting around it”.

“My colleagues in the Australian Transport Safety Bureau won’t and can’t call out pilot error; it’s not their role,” he pointed out. “But that restriction doesn’t bind me. My real point is that attitude is important.”

Next year will mark 25 years since CASA was established as a result of the Seaview and Monarch crashes in 1994 and 1993 which killed a total of 16 people.

I think someone needs to up his meds…

Kharon A brave defence to a captive audience.

Nicely spun half truths, neatly stepping around the turds on the footpath. Preaching to the converted is easy.

Drones – Yeah, well that is a world wide problem. No doubt CASA will adopt a real regulators approach, ‘modify’ it and claim it as all their own work.

Paper work reduction – you need a thick skin to tout that line – simply compare the pile Part 61 produces; it is almost bigger than the entire FAA manual. A tick-a-box easy audit which has not improved the quality of training.

“Mr Carmody said there were several tragic examples in the last two years involving pilots with “a history of poor judgment and a history of ignoring regulation or skirting around it”.

This is, unfortunately, true of a small minority. On the roads, in the home, on the streets, on a work site, – there has always been an element which defy ‘the rules’. Aviation is no different, except in one way – in nearly every other area it is possible to mount a defence. Strict liability removes that option.

Any fool in the market place will tell you what the ATSB is in fairly colourful language; but I’ll keep it simple – a discredited laughing stock about sums up general opinion.

St Commode feels he is ‘not bound’ – furry muff. Call pilot error and then prove it, beyond reasonable doubt, in court. The very word ‘error’ is a lawyers pick-nick. Intent is another – but then why bother with court and all that ‘justice’ and rule of law stuff, when strict liability can be written into complex, one way law? Breath taking audacity in a democracy?

I doubt St Commode would know the truth if it jumped up and bit his plush, polished arse. Time for a serious inquiry into the ethos and antics of ATSB/CASA. If there’s nothing to hide; why not? CASA could open it’s books, let the nation see what a truly excellent job they do and shame the critics. Unlikely, is a safe bet.

Addendum: The Leopard and his spots??

Bob Fulton Or a joke on the aviation community? Which part of that amendment forces CASA to do anything?

Glen Buckley tried to implement some common sense initiative and innovation to collectively establish, improve and monitor training standards and look what he got for his effort! It is not that the Leopard won’t change his spots, but like CASA, the leopard CAN’T can’t change it’s spots.

Last month was the 31st anniversary of the commencement of the regulatory re-write at an unknown cost way north of $500 million and all we have is a truck load of ambiguous, micro management regulations that will one day cost another $500 million to resolve, condense and sensibly re-write or face Australia totally losing it’s general aviation sector. New Zealand and Canada took five years to re-write their regulations ….. 31 years so far for Australia and the job still isn’t done!

This the calibre of those involved regulating our industry and re-writing the regulations:
Rural and Regional Affairs and Transport Legislation Committee hearings of 14 Feb 2005 – over 14 years ago!

Mr Byron—”I anticipate we would start sending some of them from about the middle of this year. I do not see this delaying the overall program excessively. We have an action item to develop a plan to forward to the minister about when we plan to have them to the minister, and I assume that plan would be done in the next couple of months. I would be hopeful that it would not be long after early 2006 that most of the draft rules are delivered to the minister.”

Fortunately Australia has a history of departmental change or “rebirth”.

Sandy Reith Bob Fulton is totally correct in his analysis of this token piece of legislation, a useless amendment to the Civil Aviation Act. A complete waste of time by the Parliament. Only Senators Susan McDonald and Rex Patrick have an understanding of the huge and ongoing disaster that is the sorry plight of General Aviation in Australia. $billions of good economic value, jobs, businesses and services all forgone for no good reason.

Safety? What a dumb joke. Safety the primary consideration? Well fine, stop flying altogether, drive your cars instead. Safety is a by-product of a healthy industry, not by the invention of complex rules and massive fees for unnecessary permissions. The waste incurred by the inappropriate forcing of Cessna special inspections resulting in the unnecessary destruction of capital value of aircraft that we can ill afford given the sorry state of our weak dollar. The CASA induced collapse of flying training has resulted in our airlines having to look overseas for pilots. Where we had many locally trained and experienced commercial pilots who graduated from charter flying and experienced all the rigours of single pilot operations in our great continent, now more likely the simulator trained pilot. Where’s the safety in that? Its well known that pilots that fly regularly are safer, if they can’t afford to fly because of the numerous government hurdles, including the very costly Aviation Security Identity Card, then this primary safety issue suffers. The whole CASA induced fear of retribution psychology towards flying is completely wrong and thoroughly counterproductive to safety. By migrating the rules into the criminal code (strict liability) no one will admit to any transgression. Even many minor such matters, and some that don’t even get a mention in the US, can land you with a criminal conviction. Try traveling or getting a job with that thrown around your neck.

Where’s the safety in that?

High time for truth to be told and for politicians and regulators to stop hiding behind the pathetic mantra of “safety.”

And for the final word I refer (yet again) to Anderson… 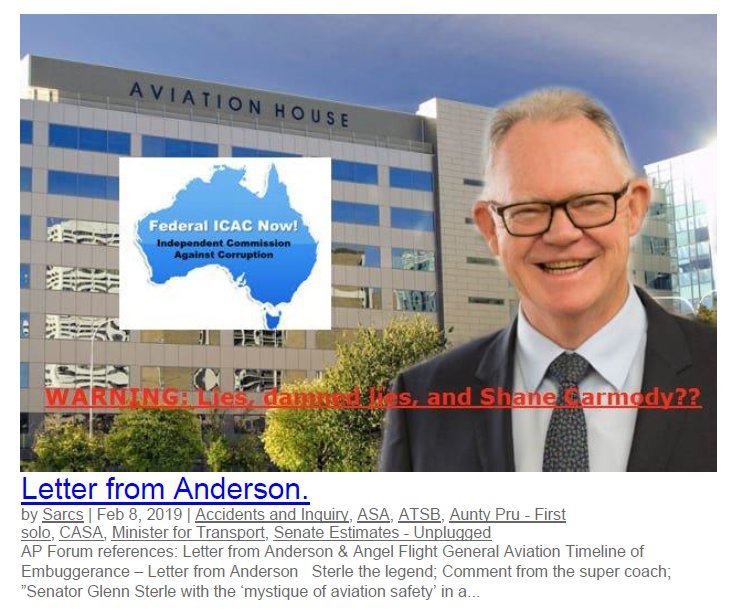 The “safety measures” will come with some new fee or charge associated – nominal at first of course so as not to create too much resistance – and given some fashionable newspeak name to allay any unease, which will of course be simultaneously denounced as “misplaced concerns” when the CASA PR machine swings into action.

This latest little trojan horse from CASA is undoubtedly but the next distraction to interfere where none is needed and to spew forth but more needless regulation. This time it will be aimed squarely at those who provide a tremendous service and benefit to the community.