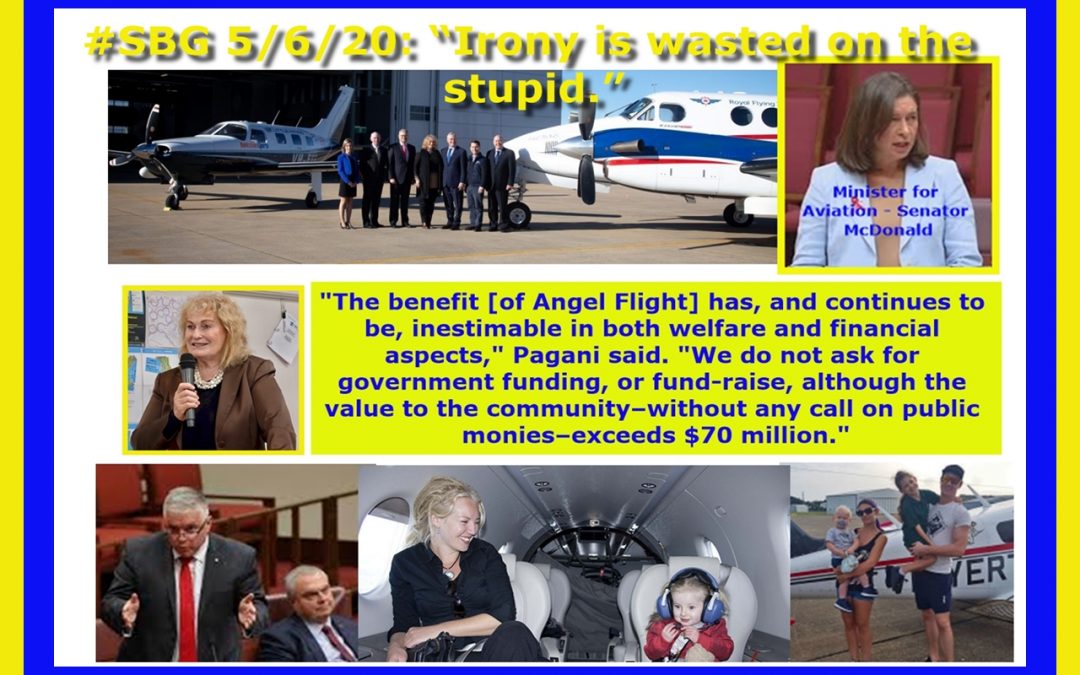 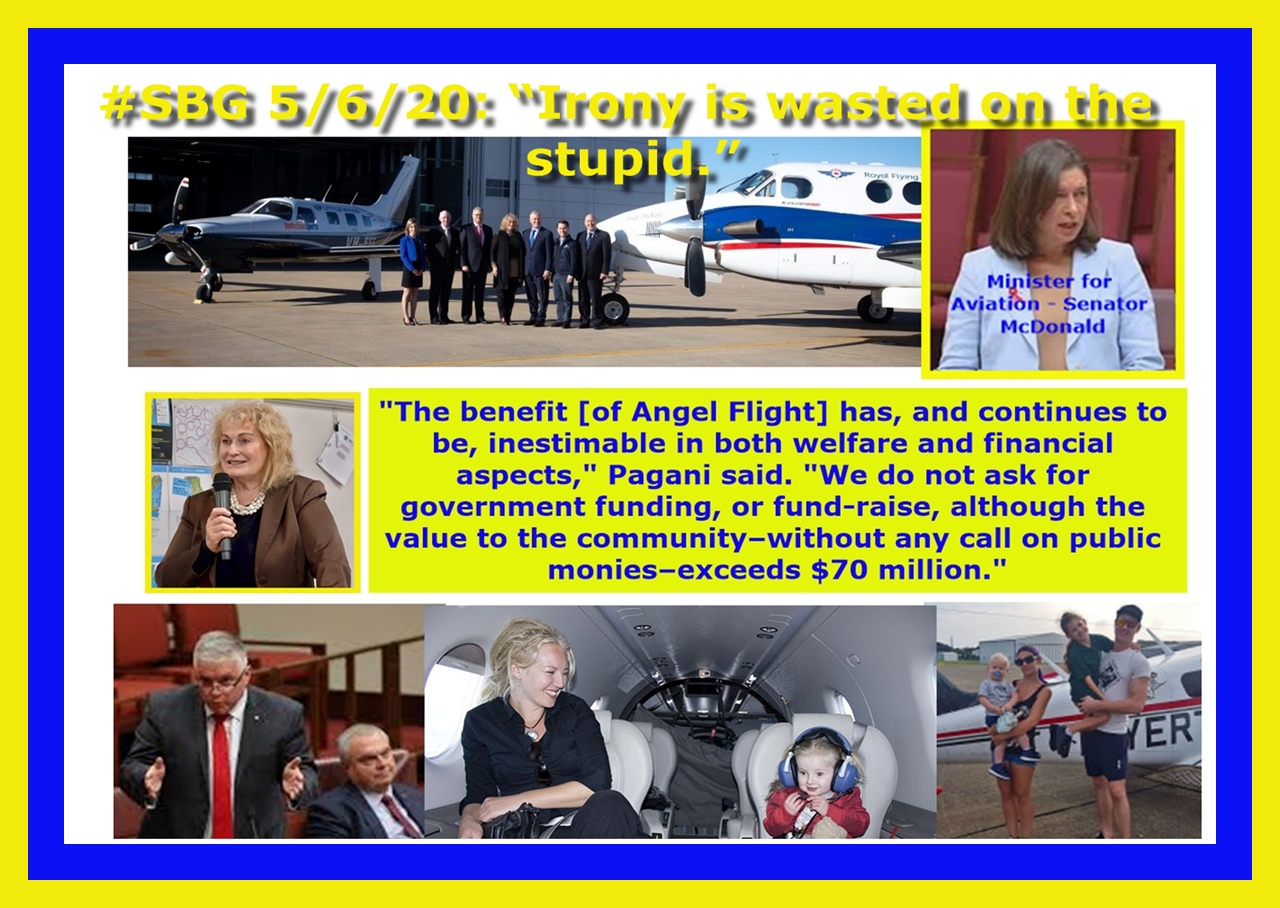 “Irony is wasted on the stupid.” – AP Forum version.

“The American elite is almost beyond redemption. Moral relativism has set in so deeply that the gilded classes have become incapable of discerning right from wrong. Everything can be explained away, especially by journalists. Life is one great moral mush–sophistry washed down with Chardonnay. The ordinary citizens, thank goodness, still adhere to absolutes…. It is they who have saved the republic from creeping degradation while their ‘betters’ were derelict.”

Dickens: even back then clearly saw the road ahead. You can easily fit anyone of our ‘big three’ safety agencies, the department and; of course our ‘political elite’ into the prose. Try it:-

But, what of irony? I doubt the irony of Angel Flight stepping into the breach unaided, un sponsored, seeking only to fulfil their stated reason for existence, at no cost to the tax payer will penetrate the self aggrandisement bubble our minister and his important ‘advisers’ live in. It bloody well should. 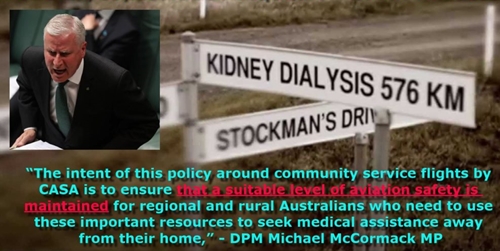 “Man, proud man, drest in a little brief authority, most ignorant of what he’s most assured, glassy essence, like an angry ape, plays such fantastic tricks before high heaven, as make the angels weep.” ― William Shakespeare, Measure for Measure

And, so should this pretend scared rabbit of a minister. Well, him and his top safety advisers. Angel flight got a hell of a drubbing – due to two clearly defined cases of ‘pilot error’. It was a ‘big deal’ and the pathetic, risible rhetoric of Aleck and the ‘statistical’ wizards from ATSB went ahead and monkeyed with the law to make sure Angel Flight was put back ‘in its place’. Not one skerrick of ‘operational’ or preventative advice was rendered to assist in preventing a known killer claiming more victims – i.e. VFR into IMC. Not one word of ‘advice’ on restraining ‘get there it is’. Nope , none of that. 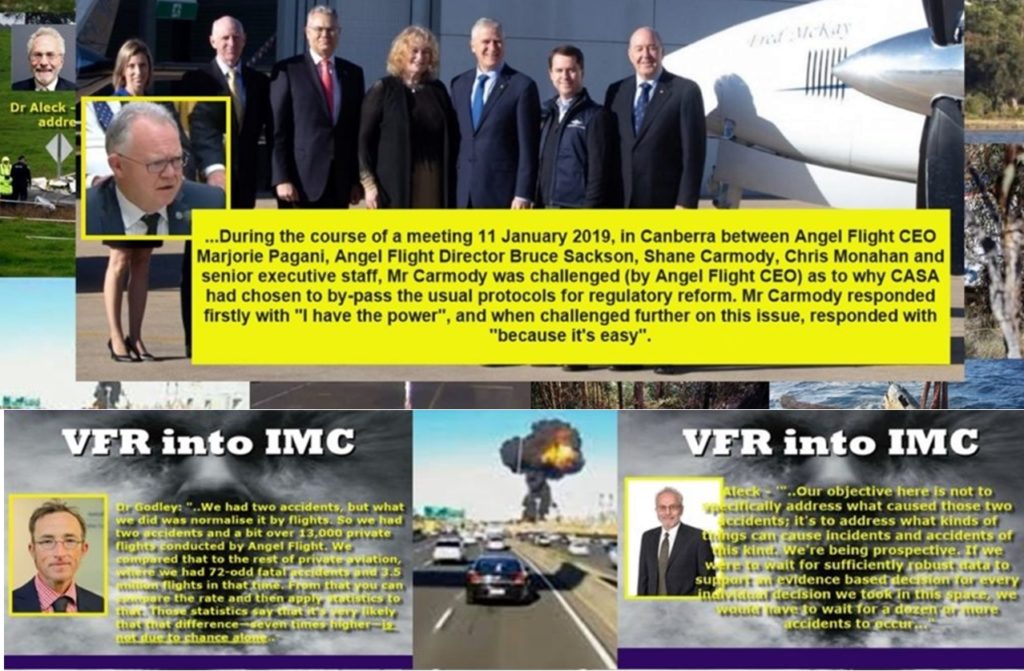 “by that sin fell the angels.” ― William Shakespeare, Henry VIII

Irony upon irony drift past, ignored by those in a self righteous stupor; the insult and injury done to fine organisation a forgotten thing. Yet, when the crisis came; such sage advice as ‘use regular public transport flight’ becomes meaningless – guess who is out there, for no pay, no gain, no glory, no glossy photo spread: Ayup – Angel Flight.

But wait: there’s more. One of the most bizarre parallels emerging out of this latest ministerial embarrassment is ‘statistics’. Those weird lies and damned lies the ATSB wunderkind love to use to support bollocks have left just one or perhaps two serious questions begging answers. For instance:-

The ministerial flavour of the month is LSA as espoused by RA Oz. So enamoured of the LSA outfits and the great photo opportunities presented – and the access to ‘easy money’ that our witless wonder boy from Wagga Wagga has hired the Ra Oz tea lady as an adviser. I wonder what advice she would offer to combat the stark (statistical) reality of fatal and serious accidents count by the outfits operating in a loop hole (with tacit approval) against the Angel Flight two, which were pilot error. The ratio is about 4:1 at the moment. Hard to be concise – there are no accident reports to read from RA Oz even on the fatal. Yet there are ATSB ‘reports’ and even ‘statistics’ to support the outrageous ATSB and CASA claims that increased engine maintenance will fix all Angel Flight’s problems. Lunacy.

“We all are men, in our own natures frail, and capable of our flesh; few are angels.” ― William Shakespeare, Henry VIII

Seriously – its Nucking Futs. Yet here we are in the midst of a small crisis; and who is quietly getting on with assisting our country men (and women) get supplies and their sick and injured to hospital for treatment. Don’t see too many LSA weighing in and RA Oz is too busy bleating for money to be concerned about a family on a remote station, somewhere between Alice Springs and Bourketown with a child needing to be flown to hospital for treatment. Angel Flight don’t beg government assistance; Angel Flight don’t charge for service – they just do what is necessary, vital and humanitarian. Humbly with a good heart. (RFDS separate Gold Star and Choc Frogs to follow).

Aye well. Probably banged on more than I should – but the treatment difference between Buckley and SOAR, combined with the insult and bullshit Angel Flight received and the serious question marks hovering over RA Oz deserve open examination, at the highest levels. That, stand alone is enough to get my fighting boots out of storage – but there is one final insult which cannot, nor will be ignored. A minister who hides behind a woman’s skirts. The witless wonder from Wagga now has the inestimable McDonald to deliver his puerile messages. Gutless – Oh yeah. Brainless – certainly. I could expand that line – but I’m sure my thoughts on this are clear enough. If not, send me note for the full version.

Ignore the following if it pleases; ’tis but a whimsy of my own.

Enough – back to more sanguine thoughts. Artists (not the ministerial bullshit type) – nor the daubers of paint; but the ‘real McCoy’ in the true sense of the word. I met the real thing this week, blown away, impressed don’t get close. Mind blowing is closer. I managed to ‘make’ the glass doors for my Grandfather clock – workman like – Journeyman quality – not ‘master’. It was a struggle, the accuracy and ‘sensitivity’ required, to the wood being worked was incredible. But, I know when to stop: there is no way I was going to carve the twiddles and whatnot’s for ‘the crown’. So; I begged a favour from P7, who had a mate; an old fellah, master wood carver. Contact was made and wood was discussed. I told him what I had and he agreed to pitch up next day. Tea for him, coffee for me and into the workshop we went. He spent a half hour, without a word, looking at my offered wood. Then, ambled outside (dogs following) to his wagon and brought a billet; politely put mine back on the shelf and sat down to work. Harry Potter – eat your heart out. I sat enthralled and watched effortless, wonderful, no cussing ‘magic’ happen before my eyes. He stayed for an Ale and a smoke with P7 and I. Me quiet, those two understood each other very well. “Not too bad” quoth this worthy as the dogs and I walked back to his wagon. He smiled, winked, nodded and disappeared. P7 said the only thing that mattered – ‘he wouldn’t have done it for a rubbish job, and he gave you the wood”. So colour me happy, humbled and a little better educated in just what it means to be a ‘master of your craft’.

Selah :
Oh, and wash your paws.