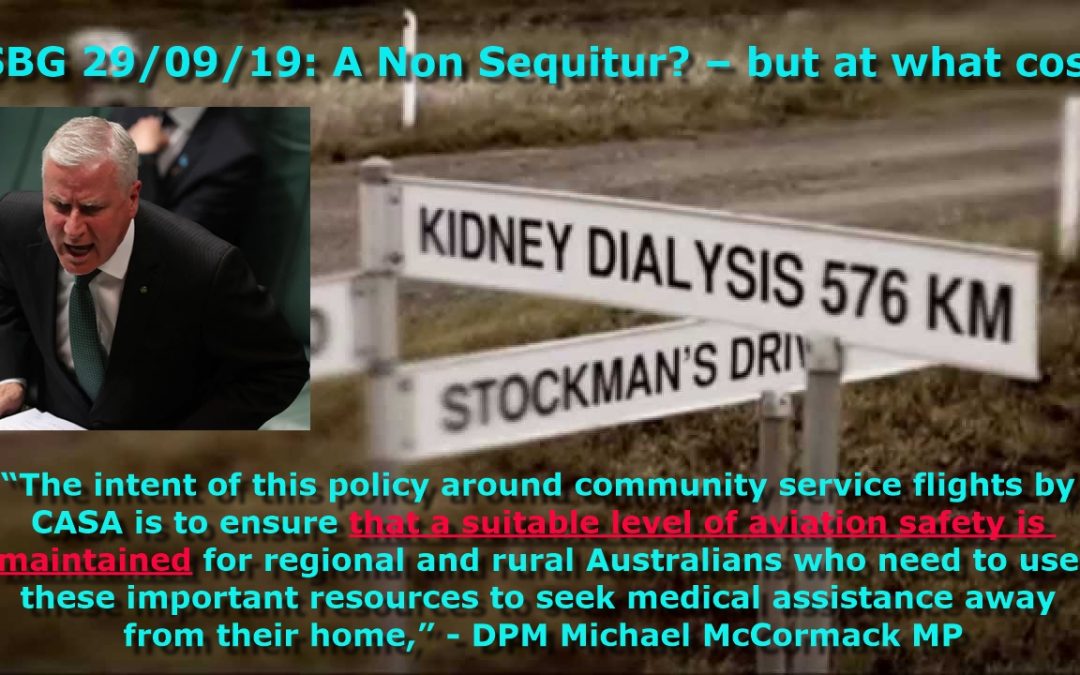 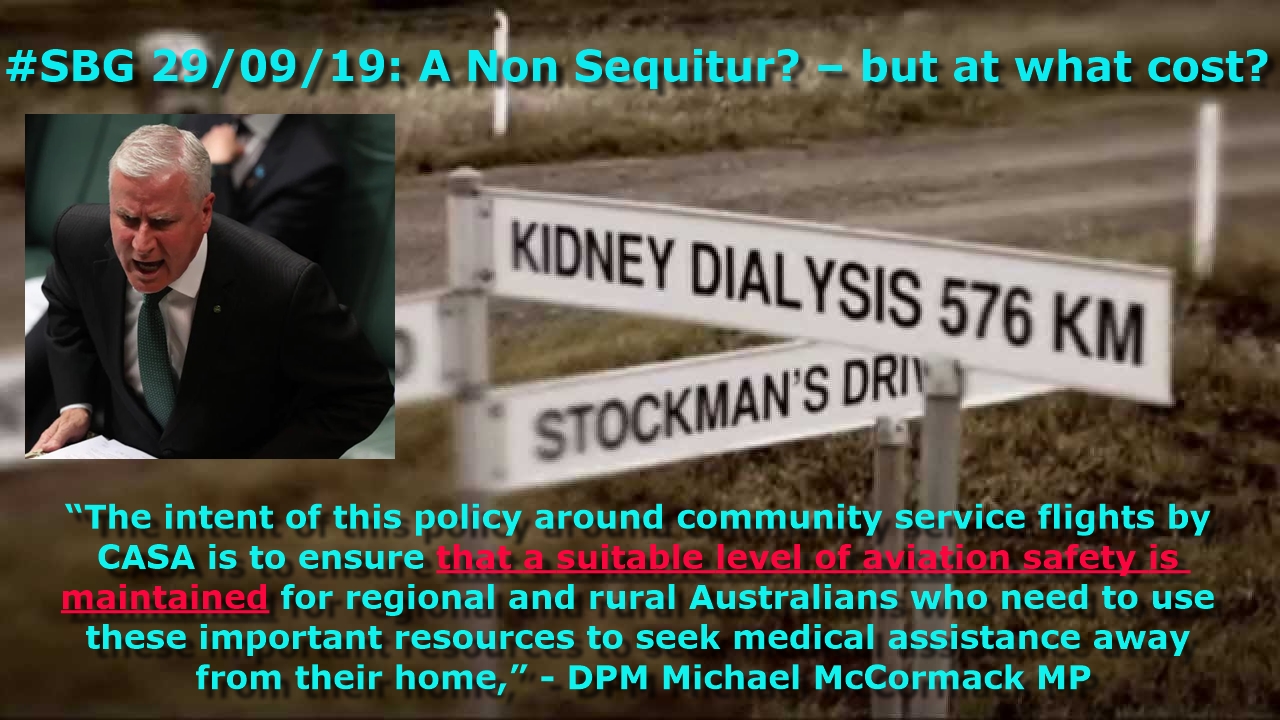 A Non Sequitur? – but at what cost? – AP forum version.

Description: When the conclusion does not follow from the premises.  In more informal reasoning, it can be when what is presented as evidence or reason is irrelevant or adds very little support to the conclusion. 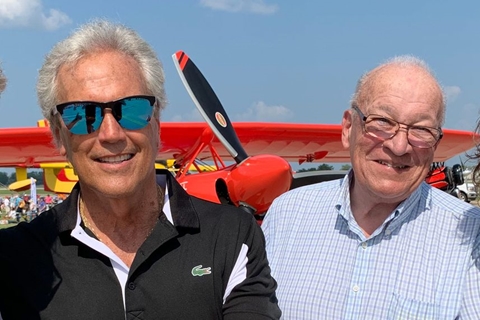 Dear Miniscule. (From the heart). Please take 10 minutes to listen to real accident investigators talking about a very real, very serious, internationally recognised problem Australian aviation ‘safety’ has.  Start at the 20 minute mark: just pin your ears back and listen: – very closely and very carefully. I can save you the time – in a nutshell – the ATSB MUST become an independent, autonomous organisation – crewed by PROFESSIONALS.

Why whimpers the confounded glove puppet – Oh! Why? 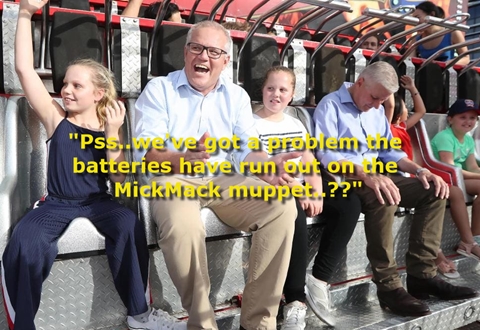 “Gods know what the Angel Flight debacle has cost; in real time and money, Senators by the hour ain’t cheap. No one minds the money being spent when there is a ‘result’. But, to see  the money squandered on a report and rules change, which affects SFA in the way of improved safety outcomes, is disgraceful. When you start to add up the cost of ‘the investigation’, the cost of CASA dreaming up bloody silly rules, the price tag for production of same, the cost of a Senate inquiry, the cost of generating a disallowance motion, the cost of parliament and the secretariat: all required to support a stupid response to a nonsensical analysis, you have to wonder at the value of the resultant mess. What has been achieved? SFA is the answer. Disgusting and beneath contempt.”

Well, you see the focus on ‘cost’ to industry against official fiscal ‘accountability’ has, somehow, become corrupt. But, in a reverse sense. Industry howling, long, loud and often about the way things are and the cost thereof. But the true, deeply hidden, unseen, unaccountable ‘cost’ – to the tax payer – for the fatuous, often flatulent results of ‘investigation’ and the CASA remedy, cost a whole lot more than the pathetic ‘law’ writ and accepted as righteous is – in reality, worth:” and that minister is very, very expensive on the public purse – not CASA’s. Particularly when the ‘cure’ is based on a wrong diagnosis. For example (and for your adult, sans Rose tinted glasses, edumacation). We begin my long ramble:-

Was the ATSB and CASA reaction (not action) to the Angel Flight accidents logically fallacious?

That question hit the BRB deck with a loud clang, followed by silence. WTD is the fool rambling on about now. Strange looks came my way – best explain I thought, the tooter the sweeter. “Gentlemen, there are four items bothering me;

(i) Seven dead in two recent accidents, the Chopper off WLM and the Mooney to the West of there:

(ii) the inclusion of AF as a separate category, now identified as such on your aviation medical form (tick if applicable):

(iii) (a real bung twister) – how much, from start to finish did the whole  AF ‘thing’ cost, in real money?:

(iv) how much difference (closing the loop) to similar accidents will be made through this expenditure on pointless, worthless ‘law’?

The two Angel Flight fatal accidents and the latest two (fatal) accidents are roughly ‘similar’. They are acknowledged, world wide as one of the major threats and challenges facing ‘aviation safety’: to wit, Pilots qualified only for flight in Visual Conditions –  entering (and  persisting) into Instrument only conditions and busting the rules of safety?  Example – VFR 101 – Always have a ‘back door’ escape plan – sure, take a ‘look-see’ be be certain sure you can turn around, back to safe conditions.

For some, as yet undetermined reason, CASA went after Angel Flight (AF). Whether this was prompted by the public statement made by a fool of an IIC on TV; or, the hysterical report returned by same, followed by an equally one eyed submission to inquiry, we’ll never know. No matter. What followed is at the heart of this ramble.

The upshot is that CASA developed a legislative instrument. That instrument is the subject of two dis-allowance motions. They escaped ministerial embarrassment on the first go-around; but that remains on the cards for the second iteration. I believe most thought the first attempted ‘rule change’ was simply a ‘Band Aid’. Wrong!~. It not only failed to address the radical cause of the accidents, but was totally inutile (demonstrated) in  preventing further events. A complete waste of time, effort and public money, which changed nothing. But how much did this Non Sequitur cost, to achieve absolutely nothing. I mean an absolute, total Zero – in the way of ‘safety’ improvement or prevention of similar. Not worth the price of the bog paper it was scrawled on…And yet.

So how much did this fiasco cost? Start to next amendment – in fear of Senate condemnation and ministerial embarrassment for totally buggering it up – caught out, behind the stumps? I dared to ask the BRB the same question.

“Impossible to compute” growls the crew. True dat. “It could be done” says one of our more academic associates. “Construe” they said. It went something like this (E&OE). Set aside the cost of the Mt Gambier accident investigation as a given ‘must’. The time taken to prepare edit and publish the final report may also be discounted as a necessary expense. Then we collect the names of every single person who handled the report, went to meetings and worked on the CASA end of the report. An accurate determination of the ‘man-hours’ invested, set as a figure against the pay scale as an hourly value. Then, work out a similar cost for the ancillary staff required to draft, edit and bring to life ‘the instrument’. Then cost out the Senate committee time and expense to determine to hold and inquiry; then total cost of that inquiry. Then add in the cost of parliamentary staff and political entities; and, you have a rough idea of the total cost so far.

Mission Impossible – right; Right. But you get the idea of the massive cost, to the public purse to achieve Sweet Fanny Adams (SFA)  in the way of ‘improved’ safety or even a humble attempt to address the radical cause of an accident series with a long, long history. The incredible waste, for no positive outcome should be the trigger for an overhaul of the aviation ‘safety’ system; root and bough. For it is a failed system; expensive, unwieldy, incompetent, far removed from any measure of reality known to industry;  and, to put a hat on it –  completely beyond the control of the parliament and minister. The cost of safety to industry is irrelevant they claim; but the cost to the nation for no return or improvement is staggering.

The ratio of ‘cost to industry’ through legislation’ is but a drop in the ocean when compared to the cost to this nation for providing nothing of intrinsic or practical value toward ‘public safety’. In short; it’s a rip off of massive proportions. Time Australians got wise, methinks.

Meanwhile, in grown up aviation nations, progressing toward addressing the ‘real’ safety matters:-

The United States has the largest and most diverse GA community in the world, with more than 220,000 active aircraft, including amateur-built aircraft, rotorcraft, balloons, and highly sophisticated turbojets. By working together, and focusing on data driven solutions, government and industry are making a difference to put the right technologies, regulations, and education initiatives in place to improve safety.

The FAA and industry are focused on reducing general aviation accidents by primarily using a voluntary, non-regulatory, proactive, data-driven strategy to get results— similar to the strategy the FAA uses in commercial aviation.

Using data, the FAA and industry are working together to identify risk, pinpoint trends through root cause analysis, and develop safety strategies. The FAA and the GA community carry out this work through the GAJSC.

Apologies for the long ramble; I just get sickened when fed very expensive Pony-Pooh from a bunch of half arsed amateurs, lost deep within the myths and legends of Sleepy Hollow, taking the money and not doing too much to earn it. There, I feel better now.

Aye, best crack on, simple things for a simple mind will provide a much needed measure of space, far from the lunacy Australian aviation is descending into; with ministerial assistance.