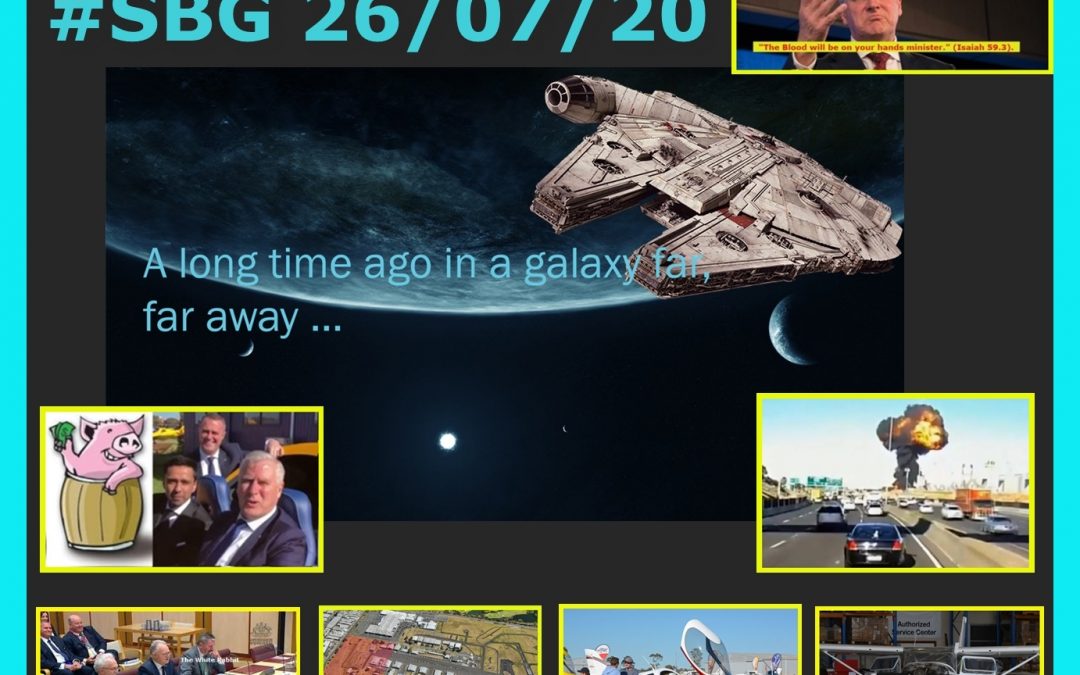 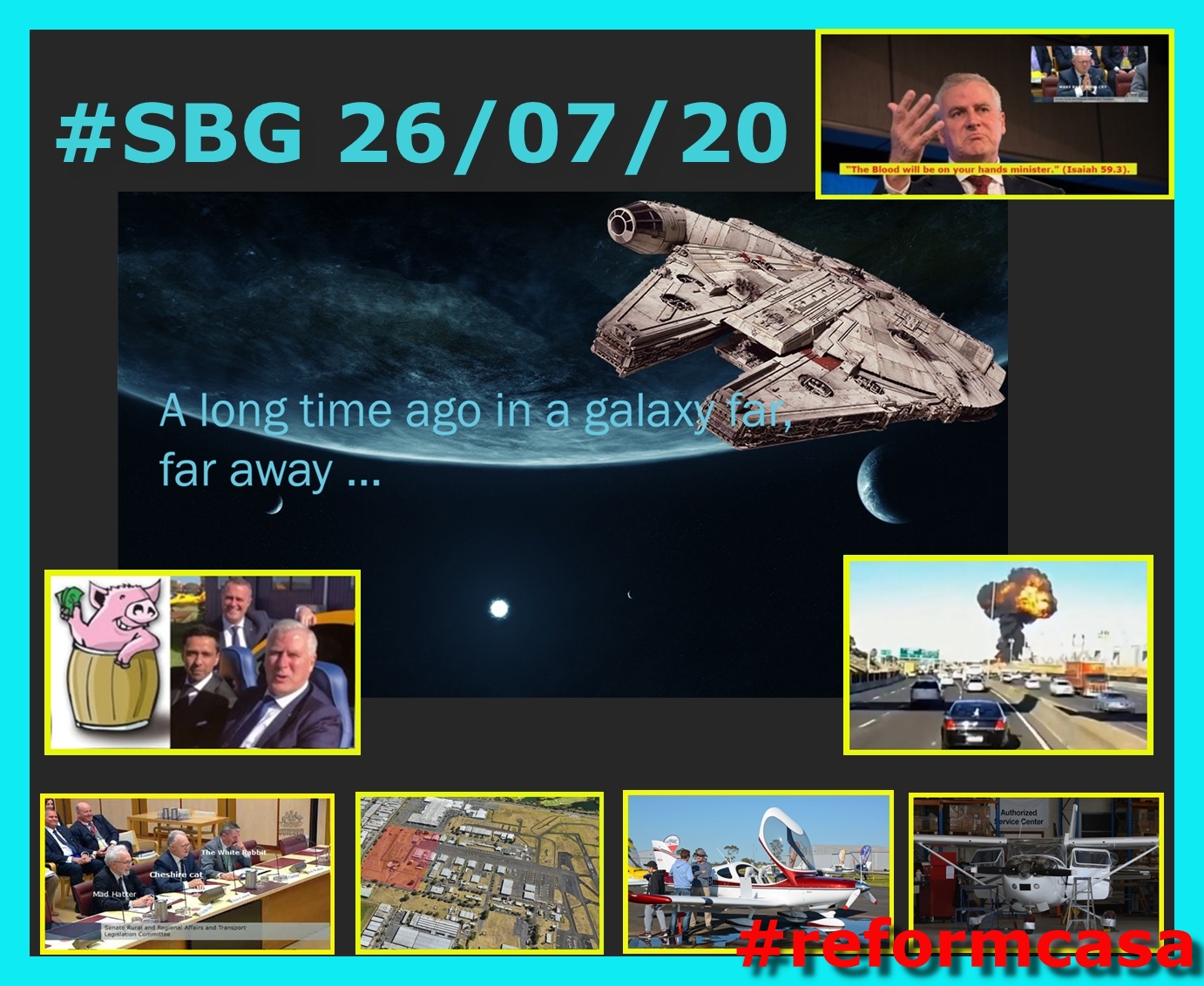 “This story happened a long time ago in a galaxy far, far away. It is already over…

Or, is it? Most good stories have a beginning, a middle and; strangely enough, an end. The story of Australian aviation is somewhere thereabouts; the chapters are many, each, in its own way, adding to the history. Each tale leaves a footprint for those who follow the aviators pathway. But at each cross road or fork in the track there are choices to be made; some choose wisely; other not so much. Whist that may be well and good for the individual, whimsical plodder; the people ‘responsible’ for aviation must follow a straight pathway. Not for them a flight of fancy or a detour along a tree lined lane, chasing butterflies. But for those who decide policy, make rules and meter out what they believe is fair, equatable and just carry a great burden; they are responsible for the well being of not only an industry and the lives of those who toil in it; but to the nation who’s taxes foot the bill for ‘expert’ oversight being delivered. The public have a right to ask why that delivery has not happened. How does one begin to explain that to the general population? 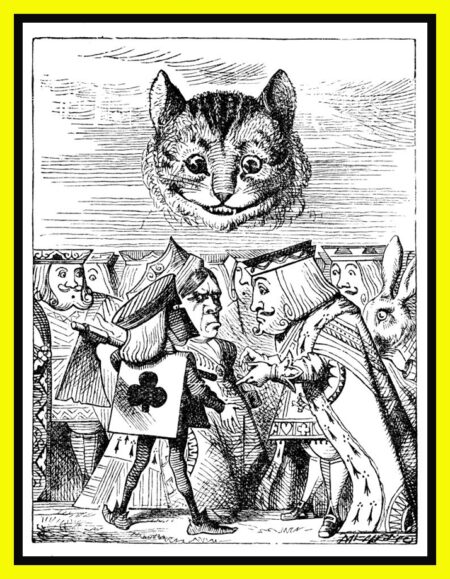 “Begin at the beginning,” the King said, very gravely, “and go on till you come to the end: then stop.” ― Lewis Carroll, Alice in Wonderland

Terrific – if I knew where the ‘beginning’ was, most happily would I start there. In my beginning, ‘we’ knew our CASA people; there were always ‘mini’ hassles and ‘rules’ and what one could reasonably expect from ‘the regulator’. But slowly and stealthily a change took root. Most, being busy and having a great time being happy to be working, that subtle change went almost unnoticed, except to a few who ‘kept ’em honest’ – well tried to anyway – Alas…Despite the best efforts of a notable few; the darkness spread. A few useless ministers sat back and let the thing grow and grow – just like Topsy did. 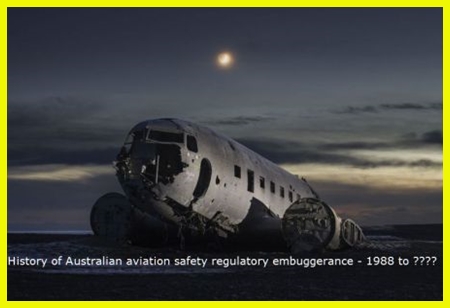 If we stand still for a moment and take a look from our arbitrary moment the ‘picture’ is bloody grim; like the Dorian Gray painting, bordering on Faust even. I digress. This week’s  public offerings should be wake up call to slumbering industry, which fiddles whilst Rome burns. Believe it or not – it is St Crispin’s day –

This story shall the good man teach his son;
And Crispin Crispian shall ne’er go by,
From this day to the ending of the world,
But we in it shall be rememberèd—
We few, we happy few, we band of brothers;
For he to-day that sheds his blood with me
Shall be my brother; be he ne’er so vile,
This day shall gentle his condition;
And gentlemen in England now a-bed
Shall think themselves accurs’d they were not here,
And hold their manhoods cheap whiles any speaks
That fought with us upon Saint Crispin’s day. ― Shakespeare’s Henry V

AOPA are doing their very best to get matters aeronautical into perspective. A series of ‘video’ presentations, with a panel of qualified industry folk to answer questions and explain how far off the righteous path CASA have strayed. It is good stuff; and it is not my indaba, but IMO the broadcast should be well promoted before hand to ALL industry participants and made available on ‘You Tube’ for those who have NDI that AOPA have a ‘Facebook’ page. Seems a shame to waste the great content, when the discussion would be of interest to the aviation community – world wide. The question revolved around the vainglorious statement made by St Commode (patron saint of safety – who’s we have not as yet determined) that CASA “got more right than it did wrong”. Load of old cobblers – supported by the CASA board (fact). AOPA’s crew dealt with it ‘robustly’. Watch the video – HERE -. Judge for yourself. Mathews (he of the CASA Board) should resign for being party to the greatest load of rubbish ever foisted on an uniformed public paymaster.

Then we look about to see where the aircraft are – silly question – they’re on the aerodromes ain’t they. What bloody aerodromes? Our capitol city secondary airports are slowly, but most surely being built over and made not only unusable by aircraft of any size other than tiny, but rendered dangerous with large buildings ‘nudging’ (to the letter of the law) the safety areas alongside runways (not the take-off and land paths). Taxi in McDonalds and pick up for Hardly Normal and Spotlight stores purchases before flight. Like passenger terminals – direct track to the gate barred by ‘retail outlets’. National disgrace and decimation of national assets – writ large in steel and concrete.

Should you find an airport from which you may safely operate your aircraft, don’t get too comfy – or; heaven forbid, build yourself a hanger and an office. You are only an eviction notice away from the raggedy edge of bankruptcy; and, with the runway now making it illegal for operations – you may have to leave your air frames to the mercy of the bulldozers. 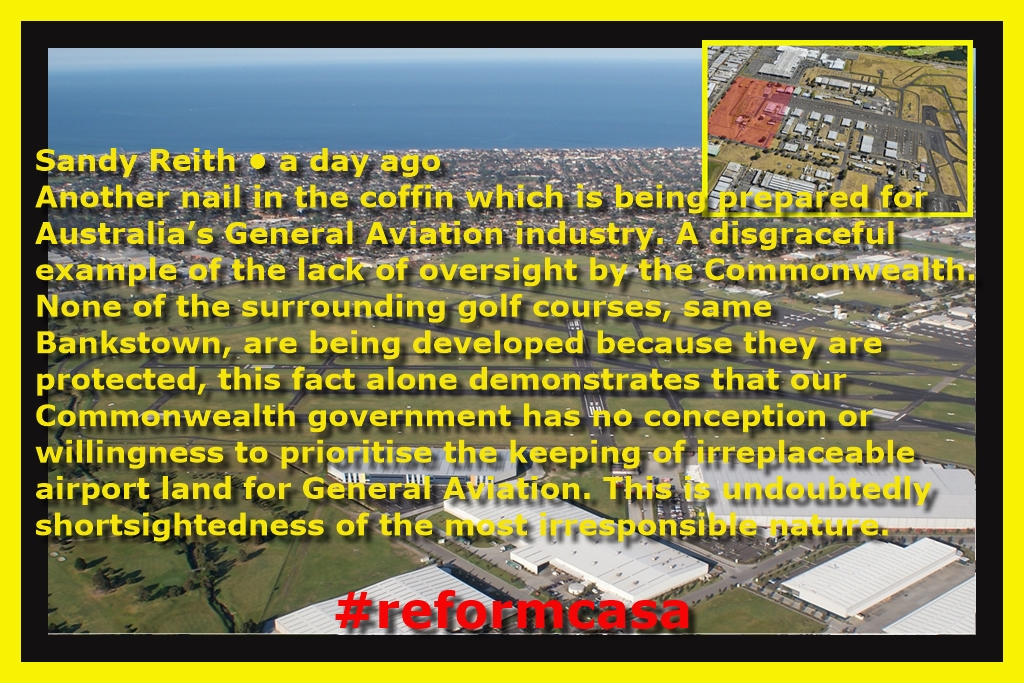 Hitch – “The aviation businesses marked for eviction have nowhere else to go because MAC has not given them options. It’s a case of get off my airport. Full stop. Aviation companies are not like most businesses: they need to operate on airports and if airports won’t let them do that then they have no option but to close. If aviation businesses close, then aviation activity wanes. Non-aviation businesses don’t have to be on an airport to operate; they can do that from any industrial estate. To add to the woes, several of the evicted companies own the hangars, which means they are obliged to pay for dismantling the buildings and rehabilitating the sites at a time when their cash flow has dried up because they’ve been forced out of business. Commercial non-aviation development should be restricted to the parts of the airport that aviation doesn’t need and MAC simply should not be allowed to bulldoze infrastructure in the form of a taxiway that they themselves are leasing from the public.”

But, lets’ say your airfield is safe for the moment and you build a flight school. Not the monsters we see in various parts of the ministers electorate but a modest affair to cater to those who are not overseas cadets. You spend your money, write your manuals, jump through the legal hoops and come out with an ‘approval’ to operate. Great. Then, on whim, CASA change their minds and shut you down; then, to add insult to injury, make sure that you can’t get a job anywhere else. This is not a ‘one off’ story; Glen Buckley is simply one of the many victims of embuggerance – CASA style. Who will hold them to account and when? Save you some time – no one – not ever. Even if Buckley kicks a goal – it will not damage the ivory tower, not one bit.

Then, we come to the ‘protected’ species RAOz and their light Sports Aircraft – (LSA) which they seem through their great flight training schools – like SOAR – to be damaging ’em at a fair rate. That sort of stuff happens with flight training – however; why it happens in RAOz aircraft seems to be a bit of a mystery; investigation sure, even with some guarded ‘assistance’ from ATSB, who drop it as soon as legally possible. But where’s the blasted report? How can anyone judge whether the training is flawed or the aircraft not suitable to task without ‘statistics’ and qualified, published investigation? For instance some of the LSA are on the VH (Australian) registration, using CASA qualified instructors. Those accident statistics are freely available and the reports give an indication of what, why and how. Nothing like that from RAOz – three lines for another fatal. Where’s CASA in all this? Down the pub, washing their hands of it, that’s where. 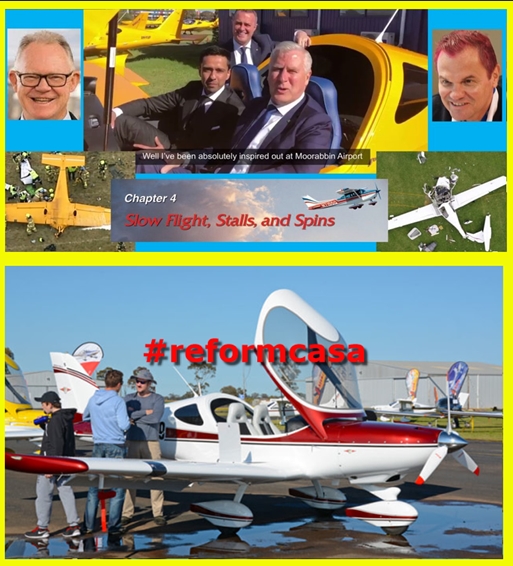 Hitch – “What other evidence can there be?”

Countering that, CASA is pointing at several crashes and a somewhat mysterious local test as proof the aircraft doesn’t comply … which is a statement not included in the local test results and not listed as a contributing factor by the ATSB in two of the accidents.

For those that have had to battle CASA, that might be sounding awfully familiar: demand more information then shut-up shop when the information arrives and continue to blame the other party. Regardless of what you think of the stall/spin characteristics of the Bristell, CASA’s handling of the issue has once again been poor and unprofessional. It’s an LSA. It either complies or it doesn’t comply. How hard should that be to work out.

Aye; it all gives me a headache – the start of the tale murky and lost in the mists of no one paying attention; the middle is self evident on a daily basis. The ending – who knows. To quote TOM ‘we’re ducked mate; ducked good and proper and not a penny to show for it.

Why are there six eyes staring at me and one size 10 paw on my knee? I look up take a breath and, on the evening breeze I can now smell baked lamb and all the trimming coming from DT’s domain. The workbench is a mess; tools laying about, shavings and sawdust litter the stable stones; temptation beckons and I cannot resist it. Take a bet; who’ll get to the kitchen door first; safe bet – the cat. For an indolent being; it can get a shift on, when it suits. Dinner first, cigar and walk with the dogs and an Ale, to help cleaning up the mess on my workbench. Stay safe and wash your paws. 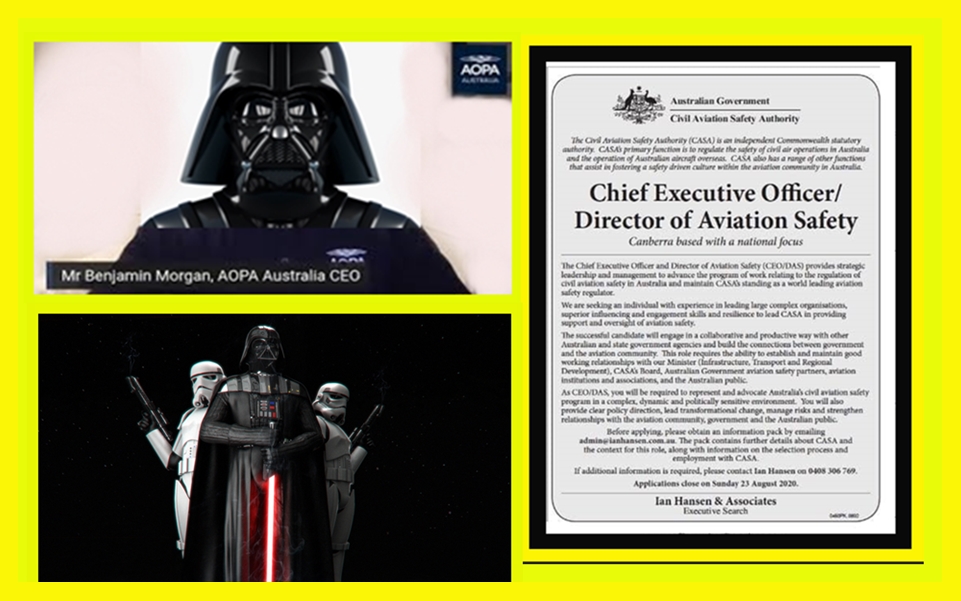 Now is the time for major transformational change at CASA. Australia needs a powerhouse aviation and aerospace industry, creating employment opportunities that empower the nation. Imagine what could be achieved with the right leadership and thinking!

I’m putting my application forward, we can do this, we can get the job done and set our industry on a pathway to lasting success!

NOT A MEMBER? WE NEED YOUR SUPPORT!
Join today: www.aopa.com.au/membership