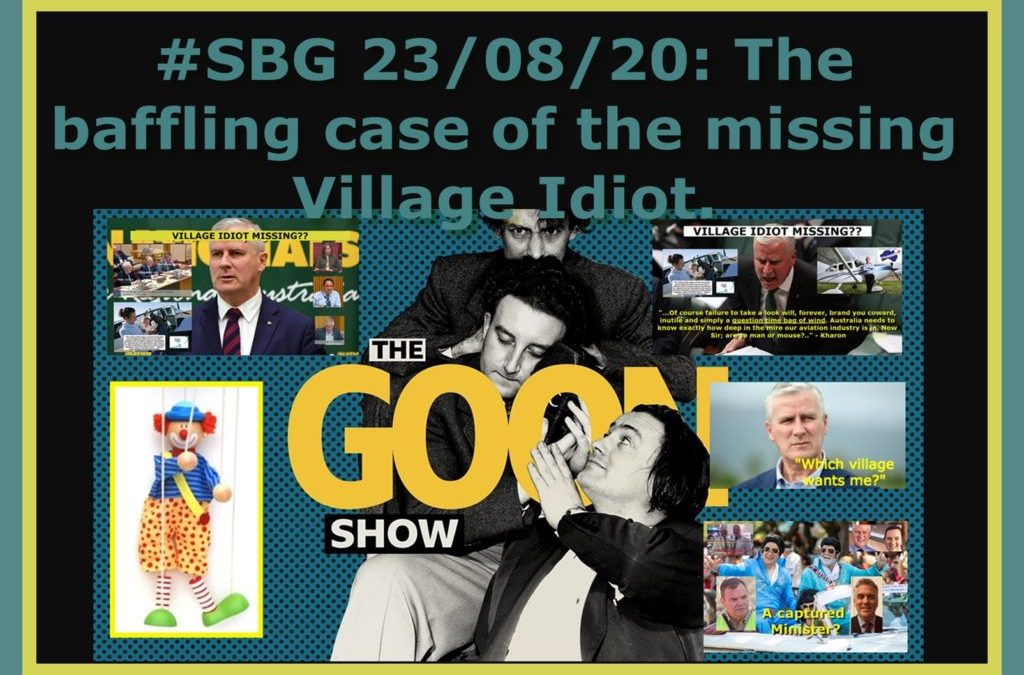 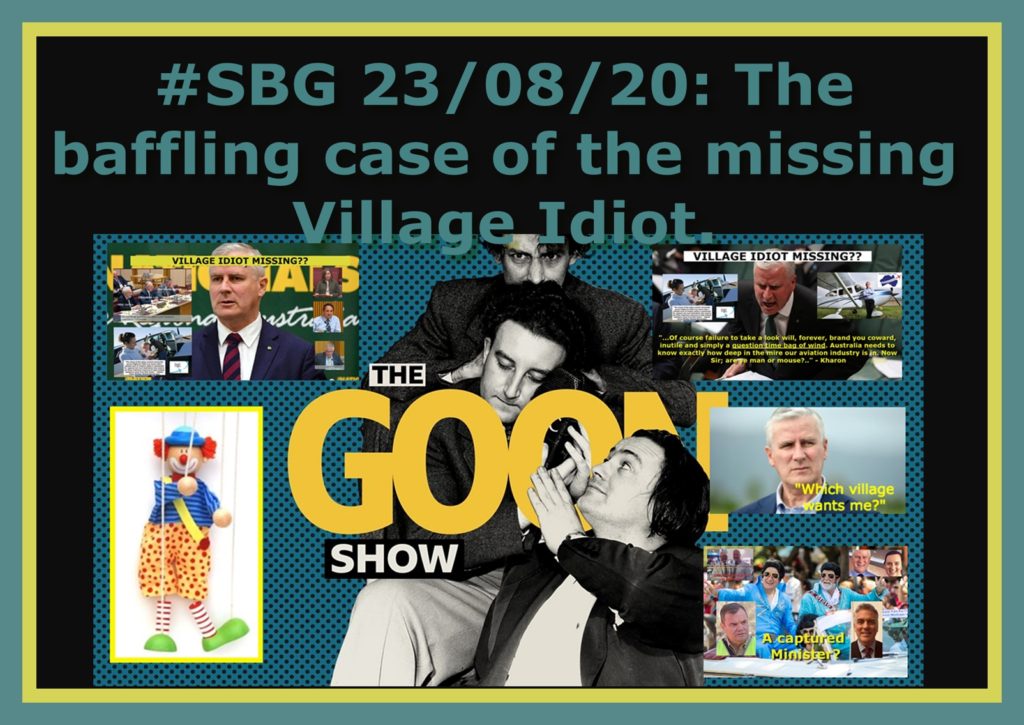 P7 has a remarkable repertoire of ‘Goon Show’ scripts – and not too shabby a mimic – when properly lubricated. We sat at the work bench discussing in general terms the hellish plight of aviation and transport generally. I wondered; aimlessly, without much hope of sensible answer, what the minister was doing about it all. Which, naturally, led to the intriguing case of the missing village idiot:-

“I remember when it all started. At the time I was asleep in my electrified elephant hammock, when through the pigeon hole flew a carrier pigeon. There was something strapped to it’s leg – it was a postman.”

Well, the tale had to begin somewhere; once again, the Goons to the rescue:-

“The scene is the country home of the Marks country home, Matzos Lodge. A mystery has been committed, young Fred Nurke has vanished. Interrogating the residents is a man, tall, dark, handsome, swashbuckling, handsome, intelligent… etc.”

From then it became a ribald, hilarious feast of nonsense which kept going (on and off) until we’d finished the work and were ‘sharpening up’ – no Ale with sharp tools on the bench. Finished tidy – the stove was lit, Ale was poured and still smiling, we sat and smoked. I waited for the inevitable question – “All jokes aside – where is this fool  minister”? – It is a bloody good question.

“Who cares” says I. Silence – the stern reply. But now, when I think about it, there is no real mystery at all. – Miniscules gone a roving and we don’t know where he are; (sorry Banjo).

And why not? Rumour has it he’s isolated from the ‘power base’ – and the sheer volume of Elephants parked in his waiting room is sight to worry even the bravest of the Pinocchio class puppet. And those elephants are just the aviation ones. The silly sod only has the RAOz tea lady to advise him, well that and the whispering voices of the CASA front row. Our wondering, witless wannabe from Wagga has a mountain of troubles to climb – all on his lonesome. Why, just this year alone the political faux-pas have been enough embarrassment to government, let alone reveal the real brains behind the scenes of ineptitude; all this before we even come close to ‘dealing’ with matters aeronautical; and there is a big (huge) growing pile of those to deal with. If Sen. McDonald can get all her ducks in a row; and, the lax, insipid nature of ministerial responsibility and bi-part-insane rubber stamping gets a serious look at – our village idiot is headed for the political stocks. 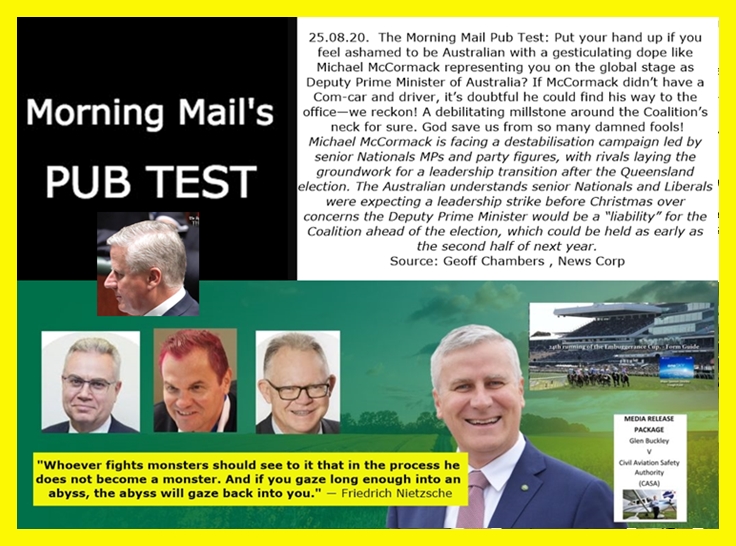 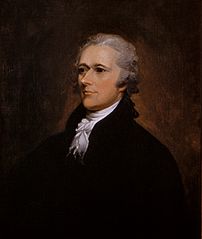 This is why industry must – just for while – put aside division. There is not one branch (bar RAOz) who are even remotely happy with ‘the way things are’. There are many who will ‘go along to get along’ – but even those who don’t dare rock a boat or two are starting to groan and moan under the incredible pressures imposed by complex regulation and; to be frank; the bizarre ramifications of what is, in effect, an ‘Eastern Bloc’ rule set. The blighted pandemic despite the damage has a silver lining. NOW is the very, very best of times to ring in the changes. Bring in the NZ rule set and people who understand industry and can make it work – fast type. There has never been a better time for significant change. The FAA is remodelling some of it’s rules to the NZ style; it shakes off a huge fiscal cost and actually empowers the regulator to manage aviation in a calm, sensible, professional manner – which relieves much of the ministerial responsibility for it all. Make no mistake – fine legal points aside – at the end of the shift – unless he acts now – (too late some say) – the minister will, throughout history, be blamed for the collapse. Covid is not to blame for the thin, tenuous hold aviation has on staying in business – the CASR and CASA are a hundredfold more dangerous and debilitating to the well being of this industry. When the virus is gone – those who survived the carnage of decimated aerodromes; lousy regulation; piss poor oversight; and, the overburden of cost: and, fear of reprisal, for daring to speak out – will need all the help they can get. The surprise is that they can manage all on their own – with a reformed Act, a better CASA and a little less to worry about – they’ll thrive. That is the nature of the beast.

I have now digressed into the realm of ramble – but no matter. 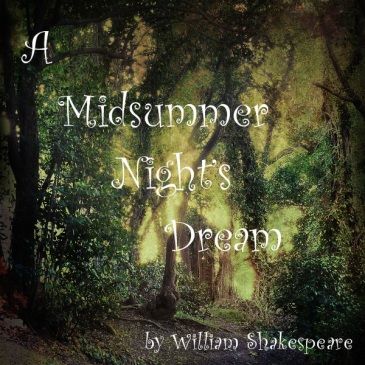 “If we shadows have offended,

Think but this, and all is mended,

That you have but slumbered here

While these visions did appear.”

There is a long list – from this year alone which shames the minister. To list ’em all would be crass – but, if ever a living, breathing, bastard of an example was required to shake the village idiot out of his Midsummer delusions; Angel Flight, Buckley, SOAR and overseas obligations should do the trick; quite nicely. Wake up, act; or, piss off = two options, limited choices; for political survival. Even if his few own mates tolerate the humiliation of an essential industry failing – simply because the only aerodromes and training schools available are foreign owned – is this good enough?

Aye; indeed – “What angel wakes me from my flow’ry bed?”

It is that time of the day – again. The tyranny over sighting today’s work took a heavy toll. What is it with young ladies between the age of two and seven which makes ’em fussy about how their furniture is constructed? There are 16 mortise and tenon joints in a playroom chair; x 4 = 64 in total; there are eight in a table to match; 16 chair legs; four table legs; four splats for chair backs; four ‘comfy’ seats to make and a table top with ‘proper’ turn buttons. A mighty order to fill – the jury is still out on the paint colour – 50/50 split – varnish and natural – or (spare me) Rose Pink. Tomorrow is decision day; P7 departed the fix – I think the dogs will need a long day out come the morn. Meanwhile; the fire is warm, the Ale cool, workshop tidy and the stable quiet; I, for one will not disturb that. Not for a million- Tailwinds and blue skies Paul – we’ll all miss you. Cheers mate……