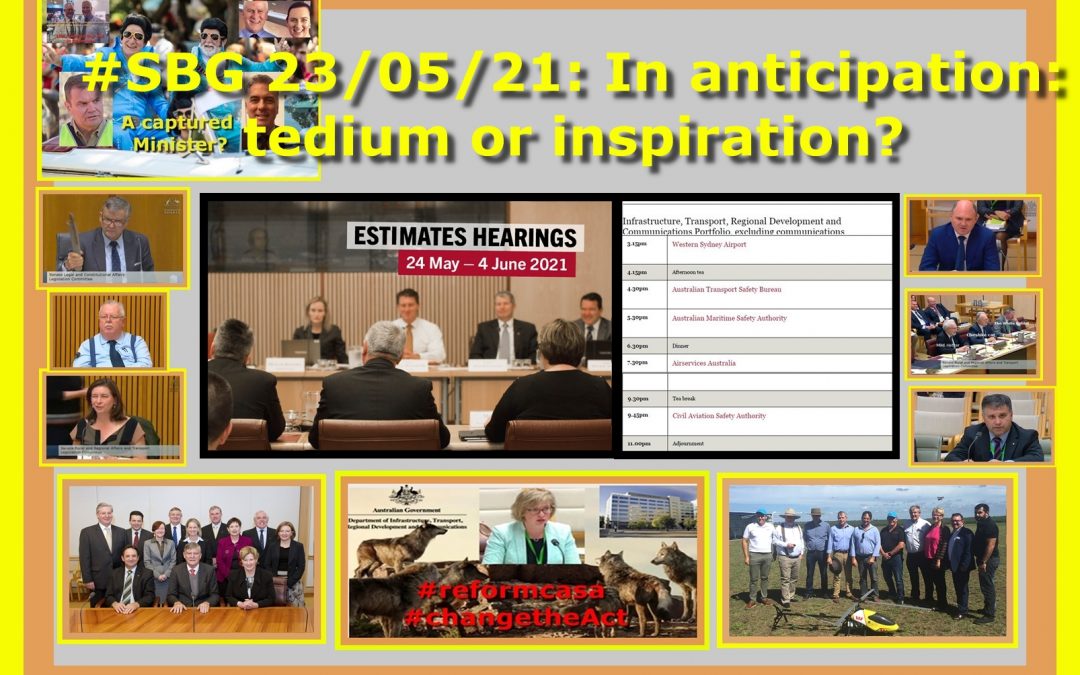 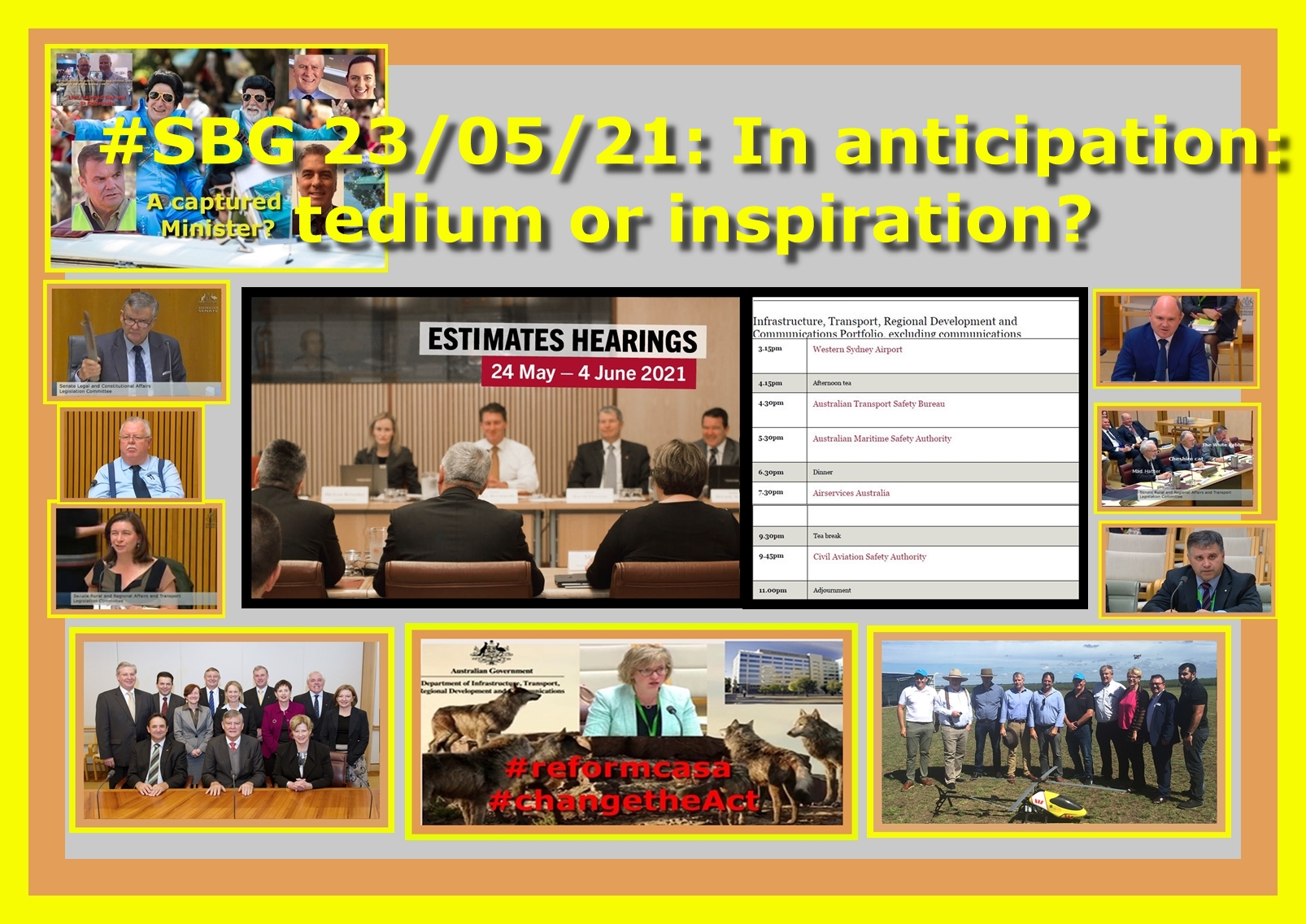 Walk into any Pub you like, find a stool and order a beer, then mention to the fellah next you that Senate Estimates in running on Monday and Tuesday. “Oh Aye” will be the parting reply – as he ambles off down the bar. Mind you ‘politics’ religion or football have triggered many a brawl – but Estimates rarely, if ever get a mention in general conversation. Even in specialised fields, such as aviation, the event rarely triggers much in the way of ‘discussion’. Nevertheless, Monday and Tuesday next week the RRAT committee settle in and roll the dice for the aviation industry.

Been wrong before, but – given the state of play and a new DAS I reckon its worth at least a little time to see how the future of aviation is going to be ‘managed’. Rumour has it that the DoIT have grabbed the errant CASA by the scruff of the neck and given it a bloody good shake to teach it some manners. At very best this could mean a return to original CASA brief. The ‘Commonwealth’ may only empower CASA to ‘administer’ not manage industry and their only real job is to administer ICAO compliant rules. 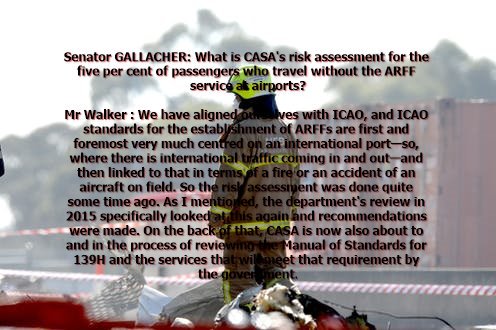 Ref: Obfuscation of ICAO – A how to?  & Latest CofFEE report and ICAO non-compliance with Annex 14 & https://www.airservicesaustralia.com/aip…ndards.asp

Even blind Freddy can see how far from that tenet CASA have strayed. I guess the question is can the DoIT reel ’em in – or more to the point, do they want to get rope on this out of control and beyond reason monster which has, like Topsy, it just growed?

Changing the Act and cutting our losses on the miserably failed regulatory reform is not a Herculean task. The clever boys and girls in the DoIT can make that happen – provided there is an appetite for real change. IMO, the very real challenge is faced by Pip Spence – many have tried to beat the CASA band and get them to change the tune from dirge to jig. So Estimates will be interesting (or not) depending on whether ‘industry’ has been heard and the problems understood properly. As P7 says talk is cheap – Ale costs money……Anyway FWIW Monday 24 inst. @11.15 EST the DoIT are ‘on’. Domestic Aviation Reform; International Aviation and Tech. Surface transport. Could just provide a clue to the future.

That session should help you decide if its worth the time to listen in on Tuesday – ATSB 1630 – AMSA 1730 – ASA 1930 and the last act CASA at 2145. I am taking bets on who Pip Spence will have there, who sits where and who will do ‘the talking’. Could be interesting – yes, all email bets will be covered – send ’em in. 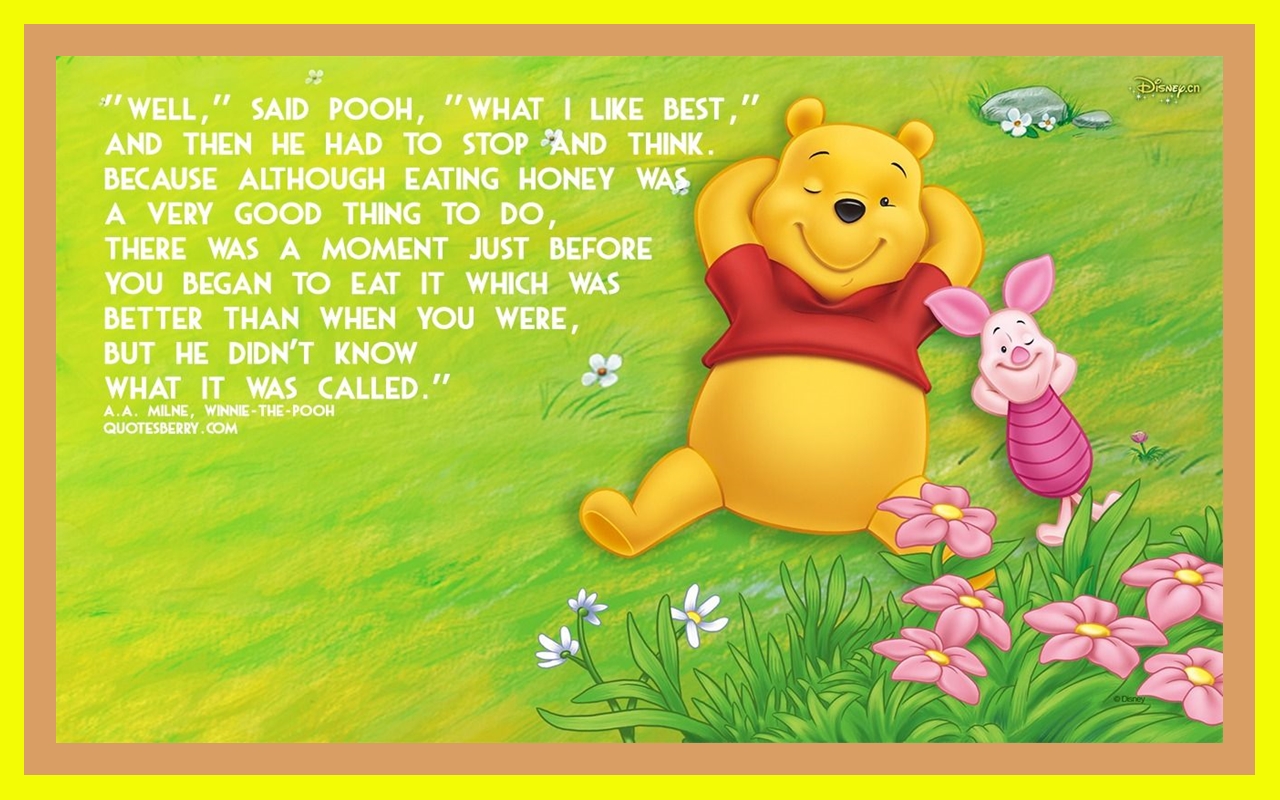 That’s about it – a mundane enough week for aviation, the world continues to turn as the nation staggers back to some semblance of normality, I note a few more aircraft operating – let us hope that continues; essential sounds for those who delights in ‘aircraft noise’.

Aye well, best find the dust pan and broom, left the stable in a mess, making a staircase for a bloke up the road, running late – worked late. Seems a shame to clean up, ankle deep saw dust, shavings and chips smell wonderful; with just a hint of coffee and smoke – alas.