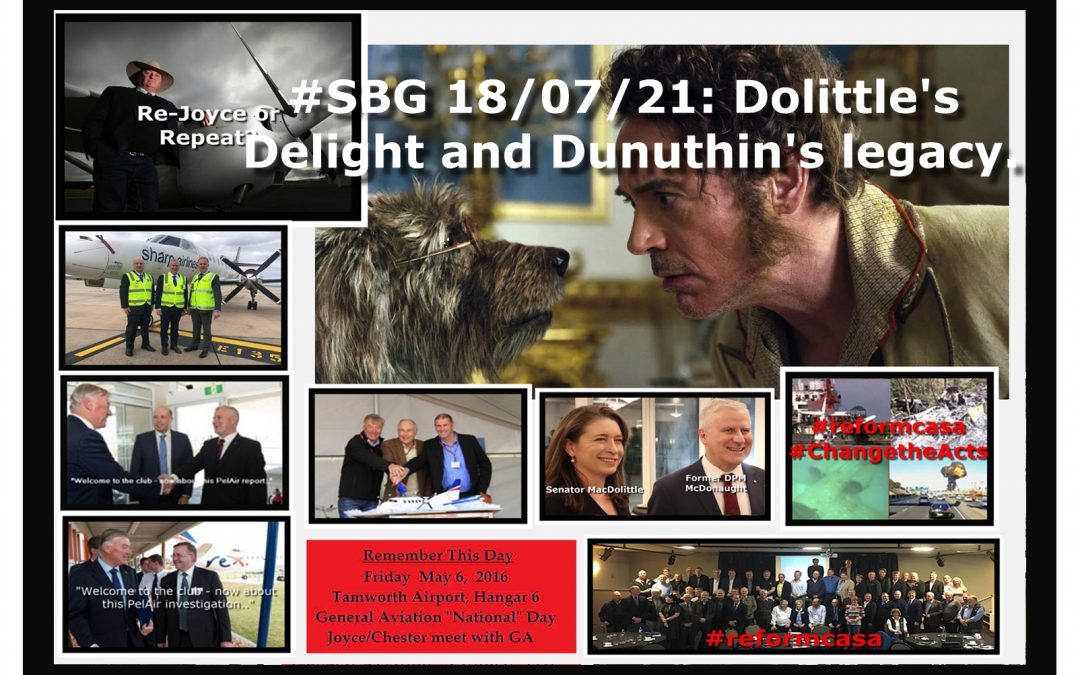 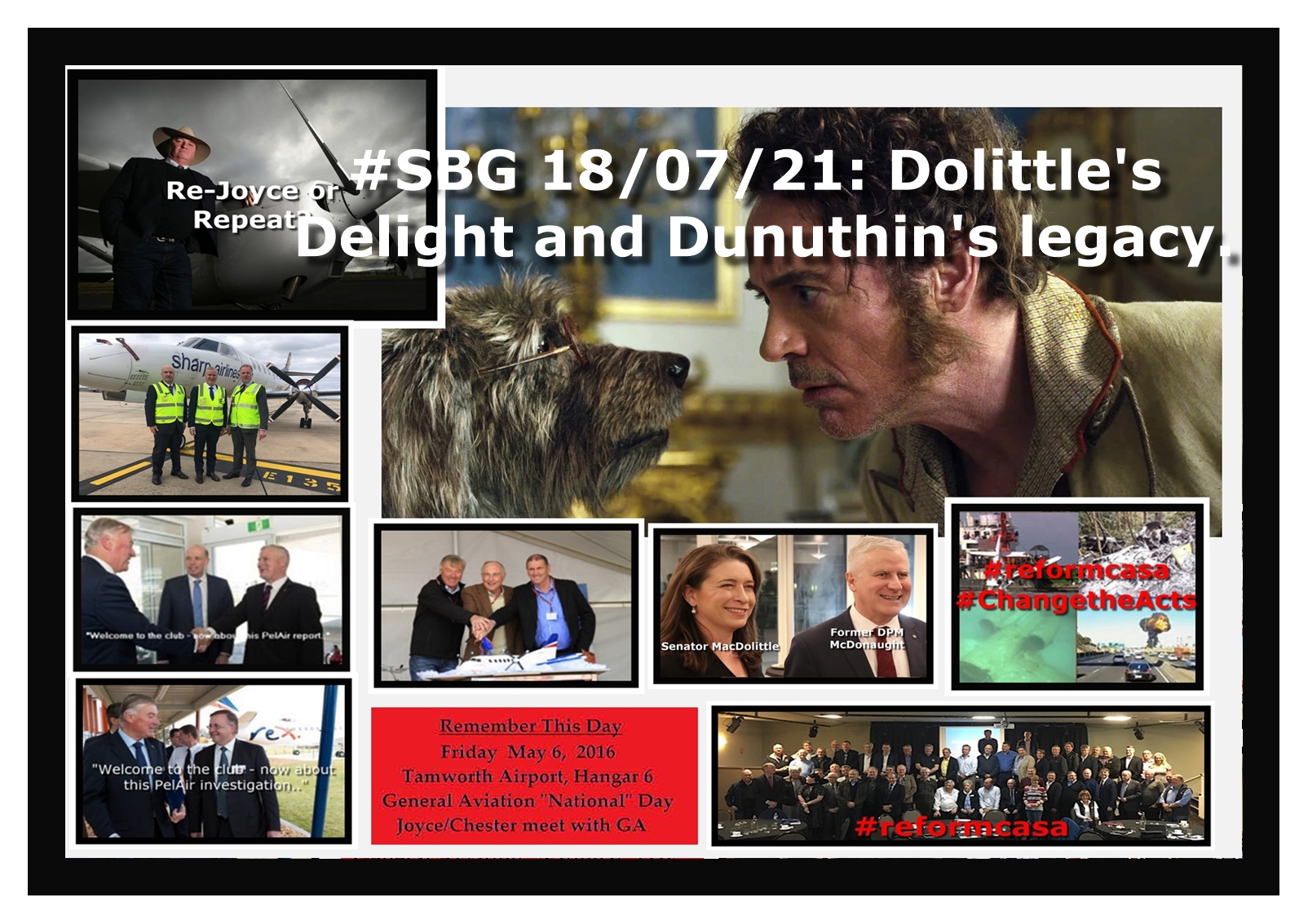 “Why, of course!” said Jip. “And those are only a few of the easy smells–the strong ones. Any mongrel could smell those with a cold in the head. Wait now, and I’ll tell you some of the harder scents that are coming on this wind–a few of the dainty ones.”

We are, just a little, like Doc Dolittle’s mate ‘Jip’. There seems to be some ‘hard’ scents on the Canberra breeze – and a few of the ‘dainty’ ones. (Collective groan) – the fool is rambling again. Not so. Not only a keen sense of smell, but good ears also needed to catch the ‘whispers’ on that same breeze.

Of course, one absolutely checks the wind sock – for small directional shifts indicate which breeze carries the information. But, enough metaphor – brass tacks needed, for the fate of the aviation is finely so finely balanced at this moment, that even the lightest kiss of an errant zephyr could send it – into the abyss of no meaningful recovery; Helter-skelter. 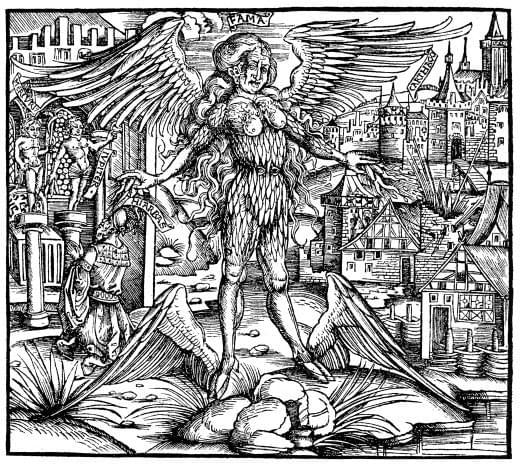 Much to consider; lets take a sniff at the political wind first. To do this, a little memory is needed. We need to think back to Tamworth 2016; those who were there will remember that two politicians were present – B. Joyce Esq and Darren 6Gs. Aye, not much love lost there; however, Chester was late and Joyce took the kick off at the ‘closed’ session; part way into the first round Chester and his dubious ‘adviser’ (MTF on that) turned up. Now then, Joyce was ‘engaged’ and had the sit down well in hand, was shown and showed some respect and courtesy. Then Chester blundered in, broke the mood and turned a crew Joyce had ‘in hand’ hostile. The rest in the AOPA archives. 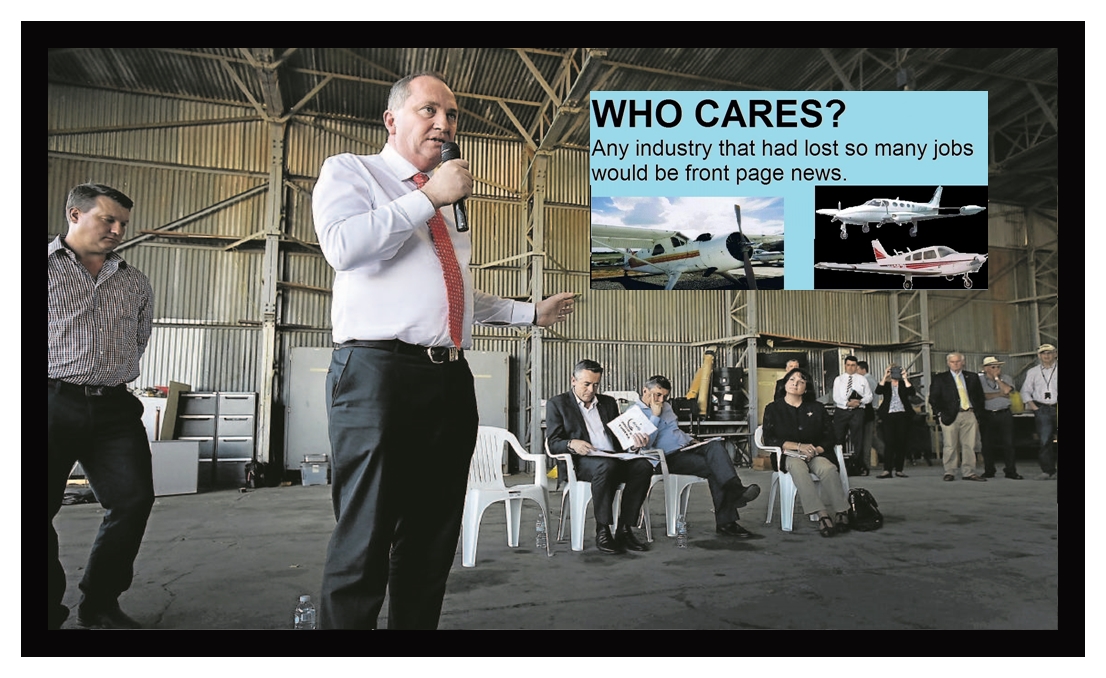 “No other evil we know is faster than Rumor, thriving on speed and becoming stronger by running. Small and timid at first, then borne on a light air, she flits over ground while hiding her head on a cloud-top.” ― Virgil, The Aeneid

Compare the response and time McCormack gifted the next event in Wagga in 2018. In 2016 Joyce stayed the course, interested, involved and attentive. In 2018 our WWWWW Village idiot breezed in; took the first turn on the microphone and then buggered off to lunch with his advisers ‘mates’ of the RAAA and RAoz. McDonaught was ‘inspired’ by RAoz outfits – like SOAR, led by his ‘adviser’s RAAA cronies and; thereafter, danced to whatever tune the ‘Sharp’ boys at RAAA were playing; a merry jig no doubt. 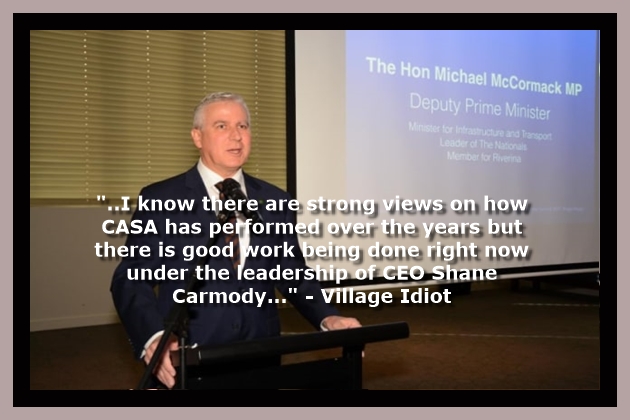 Well, Joyce is back (hallelujah). He may not have all the time in the world to ‘worry’ about aviation – but (big BUT) if he has a mind to ‘sort it’ the orders will be direct without wriggle room. BUT – does ‘he’ need to sort it? Well children, that is the big question. The BRB reckon he must – on a political basis – no option. Take a read of the P2 offering – HERE – . Labor need to score – Sen. Sterle has many irons in the aviation fire and the questions asked remain valid and unanswered to this day. Particularly those related to CASA using the recommendations of a Senate Inquiry and those presented by the good Rev. Forsyth. The DoIT and CASA have used those for ’tissue paper’ (modified version).

“The heaviest penalty for declining to rule is to be ruled by someone inferior to yourself.” ― Plato, The Republic

Then, Joyce must be starting to have a concern that the McDolittle two year inquiry has ground to a very pregnant pause. Why? Valid question that one. A question which raises many others. For example – QoN 1; did McDonaught put the on brakes  based on advice from his ‘mate’ the adviser and his RAAA road show crew? QoN 2 Was the support for the RAoz lobby and philosophy so seductive to McDonaught that the rest of GA was to be simply ‘starved’ out through development? QoN 3 How much ‘influence’ did developers have in the decisions regarding the signing of the ‘Master plans for our secondary airports?  All political cannon ammunition for the ‘opposition’ to use – and they will – if steps are not taken to resolve the buggers muddle McCormack left behind as a legacy for Joyce to deal with. 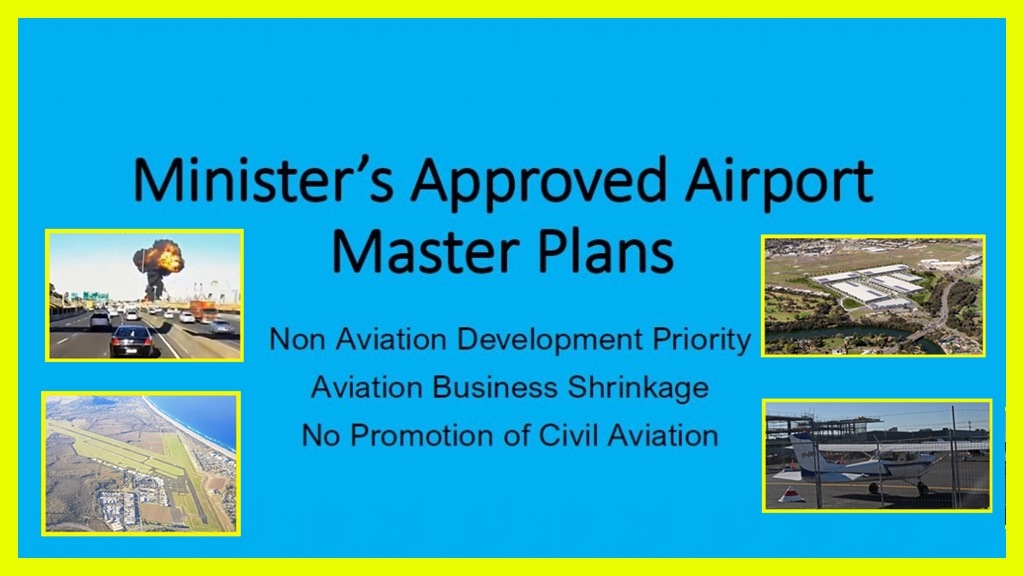 “Too bad that all the people who know how to run the country are busy driving taxicabs and cutting hair.” ― George Burns

Politics once again, brings us back to the McDonald ‘inquiry’. The abject flop; the con that raised hopes and got juices flowing then fizzled out? That report is due fairly soon; the ridiculous two year time frame clock is ticking. It also has several valid ‘head-scratchers’. For instance was the Spence appointment a deal done? If so by who and why? We shall never know; however, it seems (on short acquaintance) to be a good thing. Time will tell; but I’m even almost tempted to shorten the odds on Spence becoming a ‘star’ DAS – the auguries are good; but the coven still exists. Perhaps, maybe, we hope that (for example) the government Competition Principals Agreement (5)  may (maybe) be applied to say – Part 149. The BRB have for a long, long while now held firmly to the belief that CASA have simply ignored this and been guilty of capturing not only ‘project management’ but providing a thing like SOAR (ex minister’s ‘inspiration’) to gain an unfair advantage – private pilot medicals being a prime example. 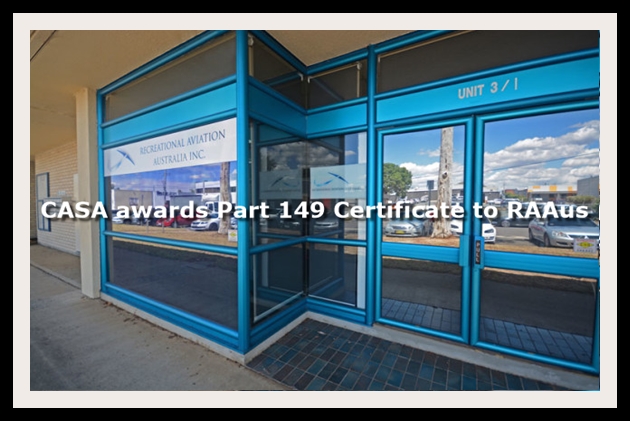 Dry as dust all of this – ’tis but my poor attempt to clarify a Bookie’s thinking; there are some first class minds working hard to return balance and sanity to government thinking on how best to mange aviation; so it can meet the promise it holds to become, once again, a thing of national pride. So its serious. If, IF Joyce, Spence and McDolittle can even start to reduce the intolerable burdens CASA forced onto industry; begin to bring our Airspace management back to reality and cost effectiveness, turn the ATSB back into a honest reporter, free of the MoU; then, they will have done well for us. Aye well, the ledger is open; I will post the odds next week; but until then we shall watch, listen and sniff the breeze for those ‘dainty’ scents which will signal more disaster or an even chance. Think carefully before you place your bet; as TOM always says – “there are two ends to a plank”. Particularly a political one.

There – duty done, despite it being dull, boring and no fun whatsoever for a humble scribe. I oft wonder – are the mills of the gods actually grinding.

Well, I finished the new gate for a paddock – they wanted a replica of those old English five bar jobs – 3.3 meter span – 2.2 meters high. The ‘post’ 200mm x 200 mm – all hardwood; all hand made. Each piece hand planed and sized, hand sawn to length, each joint – 10 off 25mm thick/ 150mm tenon fitted to a drilled, chiselled mortise. Needed a tow truck to shift it. But, the things of beauty came from the Blacksmith – the hinges and pins on which to hang it. Each one a work of the blacksmiths art – hand forged, the simple elegance and integrity remarkable. Not too shabby from a retired Captain who learned his ‘alter’ skills six decades ago. Tomorrow, we shall (gods willing – weather permitting) hang that gate. Our ‘Smith’s’ granddaughter to have the first swing on it. The old cat has just landed on my desk; the dogs are giving me ‘the look’. Its a fine morning – (time fly’s)  (Checklist) boots, smokes, lighter, jacket. Checks complete –  “Away then.”

One would have to wonder if our government will ever see that the lack of rational policies for General Aviation has been a disaster and is not sustainable.
Parliament’s abrogation of responsibility for the whole aviation area by divorcing CASA, ATSB and AirServices away from Ministerial control, creating then allowing these independent monopoly corporations to look after themselves, cannot, and will not work in the National interest.
Rule by experts has always failed and is an anathema to our democracy. After all why vote for representatives if they are not responsible for the actual governance?
Time for change.