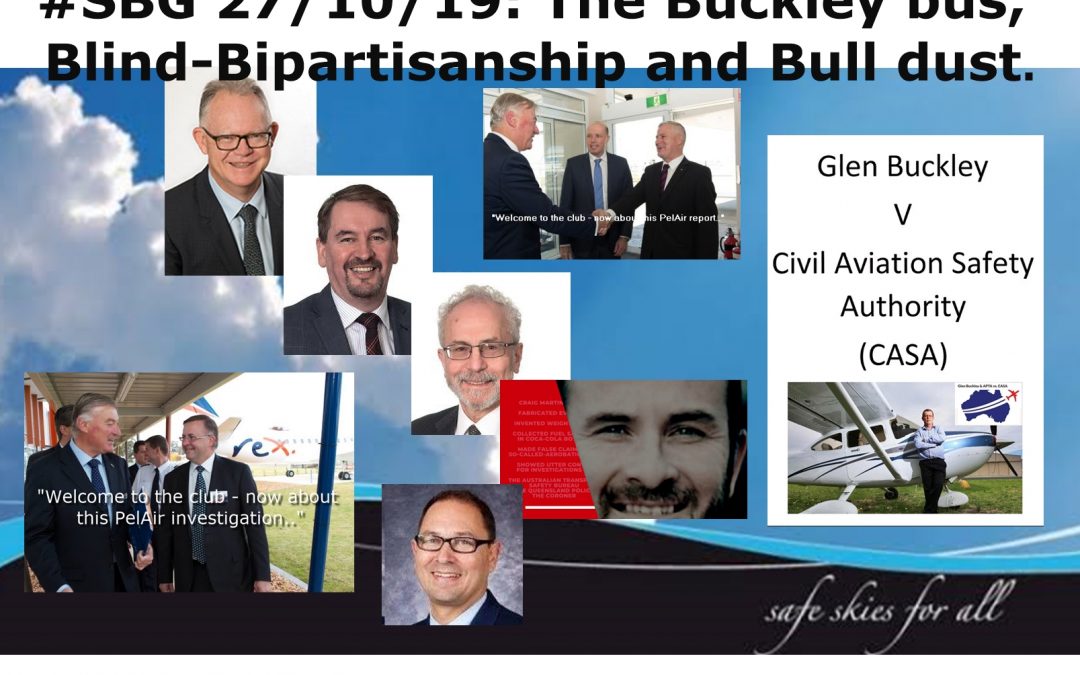 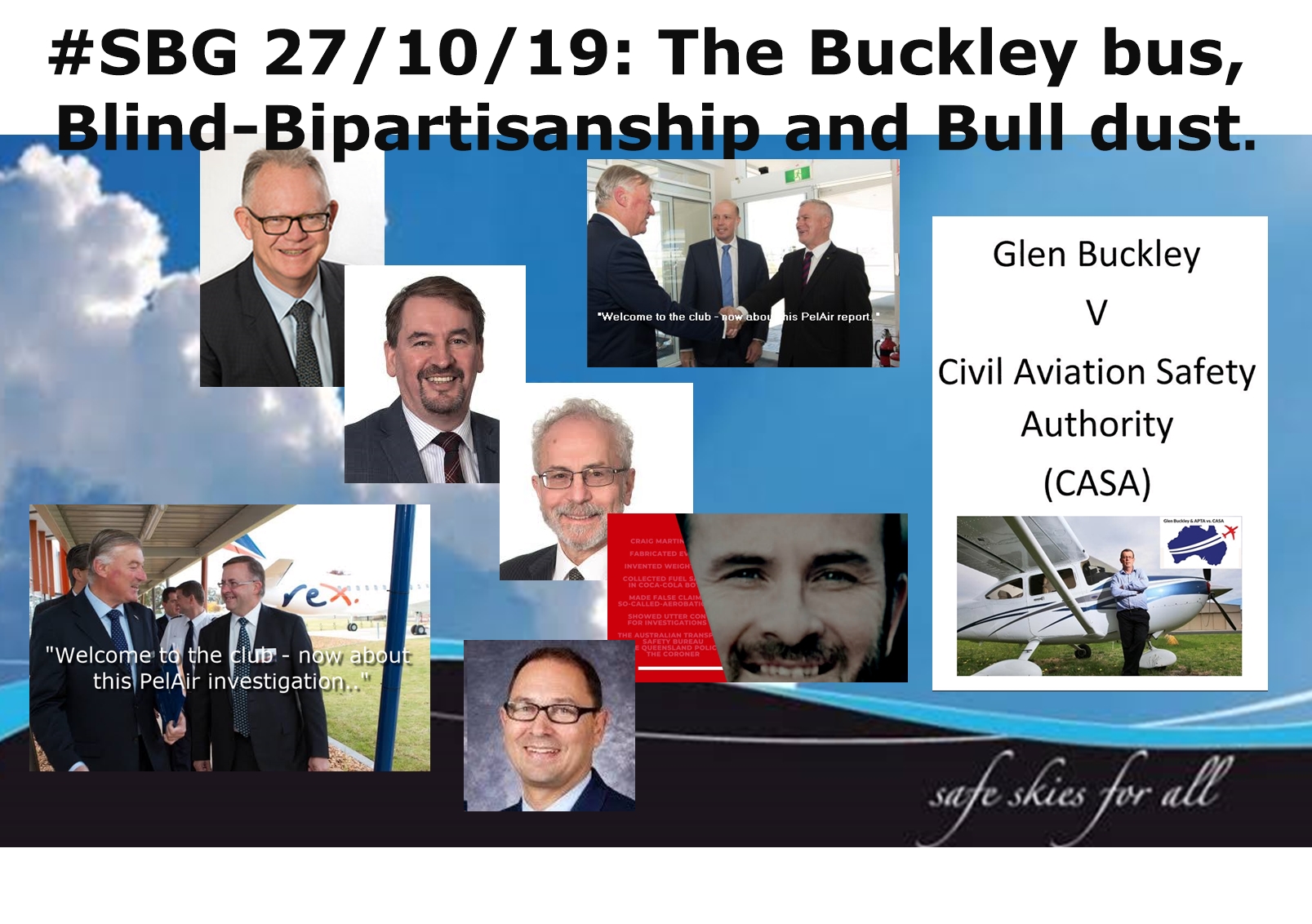 Buckley – “So where to from now. As my legal process begins, I know my legal team will tell me to stop posting, and I will.”

Glen Buckley (GB) may have stopped making his situation publically known to whoever would listen or read; but AP has no such restriction. The first point which needs to be hammered home; ruthlessly, with venom, is this. Buckley is not an isolated case. In fact he is one of a silent many; not just a few – but a lot. There are enough documented cases of ‘Embuggerance’ in the last decade to demand that CASA be subject to criminal, corporate and professional standards investigation: the full Monty. There is a cone of silence from industry – professionals of all ranks live in fear of becoming one of CASA’s particular ‘persons of interest’ i.e. a target. Business owners will hardly hire an ‘experienced’ pilot without a nod from the local Gods. We have on record three documented cases where ‘Senior’ qualified, experienced (needed) men have actually had their air ticket cancelled – on the day of nominated travel – because their prospective employer conferred with the local CASA office. AP can provide from one ‘regional office’ alone five, fully documented cases of CASA actively preventing gainful employment. Buckley got lucky – believe it or not. He has the only documented, written and signed evidence of this standard process. I won’t produce it all here, this will be a long enough ramble without. But, the moment any sort of inquiry into the abominable behaviour of some CASA officers is announced – boy, oh boy. Will we turn the dogs loose. A totally provable torrent of CASA lies, malpractice and malfeasance – all fully supported. Nowhere to park the truck – alas. But maybe, someone has guts to tackle the envious Bully. Perhaps our Senate Committee can get over being so duckling Bipartisan, open their shoulders, get off the party easy out prevarication pot; and, pay some attention to what is actually happening in the ‘real’ world they don’t see from within their gilded cages in Canberra. How can they bear the humiliation of Pel-Air and still face the industry from behind Senate privilege? That is a no brainer of course; a burn on your arse is not as painful as one on mine. (Old Jewish saying).

Buckley – “I have been chased out of the industry by the conduct of Mr Brad Lacy, Jason Mc Heyzer, Mr Craig Martin, and Mr Graeme Crawford. Their conduct has left me on the cusp of being declared bankrupt. My actions improved safety, theirs have reduced safety. That is measurable and demonstrable.”

Tragic – but an isolated case? No Sir, it is not, not by a bloody long march. Yet there sits Crawford; protected, earning, drafting Gods know what and generally enjoying a position he is in no way qualified to hold. Ask Qantas if you find it hard to believe me; either they or other previous employers, they will (under protection) tell you the same sorry tale. In short they were (all) very pleased to be rid of him.

One of the most despicable, duplicitous, disgusting ‘Cop-outs’ is the sheltered workshop sponsored by being ‘Bipartisan’. FDS – ‘they’ in parliament, can’t even agree on whether a pedestrian crossing should be black and white – or white and black. Yet, because CASA write it – legislation just sails through both houses, without a question being asked. Rubber stamped – no question or debate needed. Even when a question does manage to weakly crawl out of the deep sewer pipes – it is quickly slaughtered by those who benefit from the magical protection of ‘Safety’ speak, by ‘their’ experts. The only thing CASA is expert in is convincing the latest hapless Half-witted minister that they, and only they are ‘the experts’. How easy it must be to not have to worry about crap legislation. Government pay the protection racket money – politicians don’t have to get involved – the governments anointed ‘experts’ are ‘world class. “We have a Bipartisan approach”  BOLLOCKS……They may agree that ‘Safety’ is paramount – but what is ‘Safety’? Define it. It’s a ducking shambles, run by rabble of misfits, rejects; and, a Snake Oil salesman. Part 61 being a perfect example of the totally bloody useless chumps, like Rodger (the wordsmith) Weeks who delivered the most inutile piece of garbage, into law, without a word from the parliament. For Ducks sake – wake up…………..

Buckley – “Another option might be to start agitating for more inquiries; also pointless given that so many of them have been ignored or failed to have the desired impact. For all the will of Senators like McDonald and Patrick, the brick wall built by a lack of political will may be too high to climb over and too strong to break through, leaving a long and winding road around the wall as the only path ahead.”

Buckley – Some time ago I stumbled upon a link to a post that Mr Bruce Rhoades made regarding his experience with Mr Martin. Whilst that link has been removed, I do recall that the claims Bruce made about Mr Martin were.

I would use those exact 4 words to describe my experience with him. Those exact words.

Aye Glen, in a honest world, your tale could never have happened; in a first world aviation administration it would never have been tolerated. We need to uncap the well of deceit and let it flow over yet another government, quite happy to spend a small fortune on a new rocket engine for the USA (as if they need it) but will not even tolerate a report, like David Forsyth’s to gather any momentum, traction or; heavens forbid, real change in real time. Even a simple matter, such as Angel Flight shames both parties; their collective cowardice, hidden in Bipartisan Bull-Pooh, stands testament to their disgrace.

But the thing really get’s me going is simple. THEY KNOW – much more than we ever will about just how buggered up CASA is, why it is and who’s to blame. Will they do anything about it? History simply laughs at that question. The whole lot, bar a pathetic handful who sadden me, sicken me.

Not to worry; I tore a chunk of bark off my paw this afternoon – workbench bit me. Strange thing ain’t it. My  edged ‘cutting tools’ (Chisels, plane blades etc.) are literally and actually kept surgically sharp and polished : they have to be. I use ‘em a lot and a blunt edge is a very, very dangerous thing. You spend a lifetime learning to keep you fingers out of harms way from lethal cutting edges and the general rules of ‘working sensibly’. Even so, it is the easiest thing to brush against a sharp edge, carelessly placed; hardly notice until there’s blood all over the job (Hydrogen Peroxide takes it off the wood – by the by). But, the bench gets a thumping – knocked about, chipped, cut and sawn into. Never thought much about the structure I rely on having the potential to harm me – but: even so, there on the desk is a 18 mm splinter (blood coated) of hardwood which I’ve not long ago dug out of my paw. Today, without fail – I shall spend as much time as is required to restore my benchtop to safe working order. Now then, Iodine, Band Aid and away, dogs running ahead, cool breeze, sun shine and miles of peace in open space, all before breakfast.