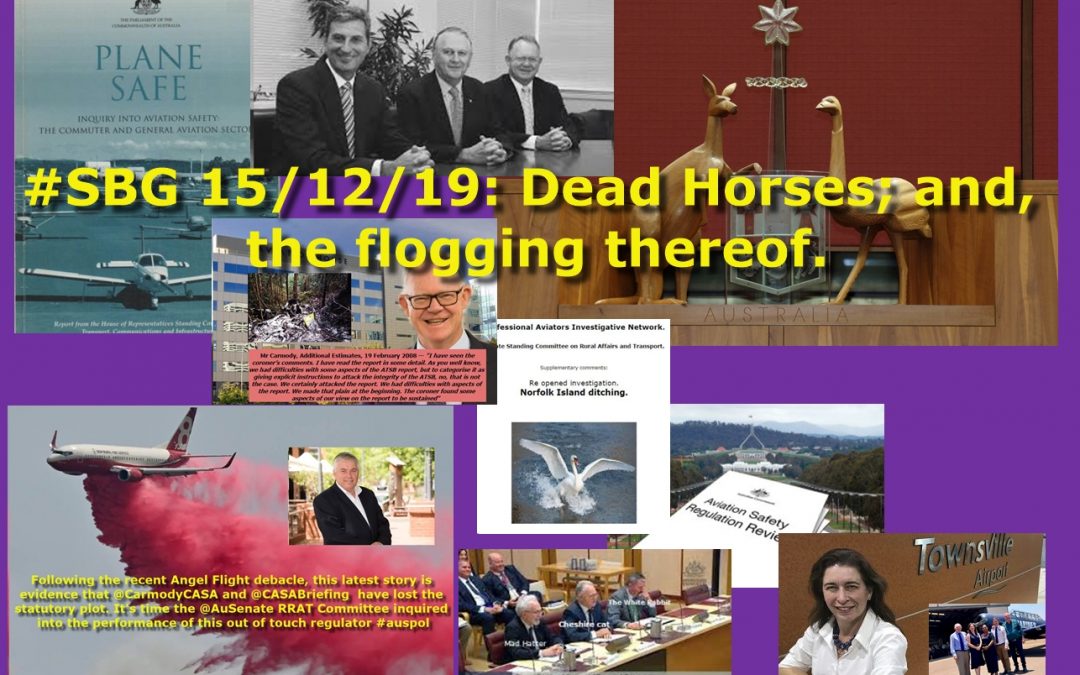 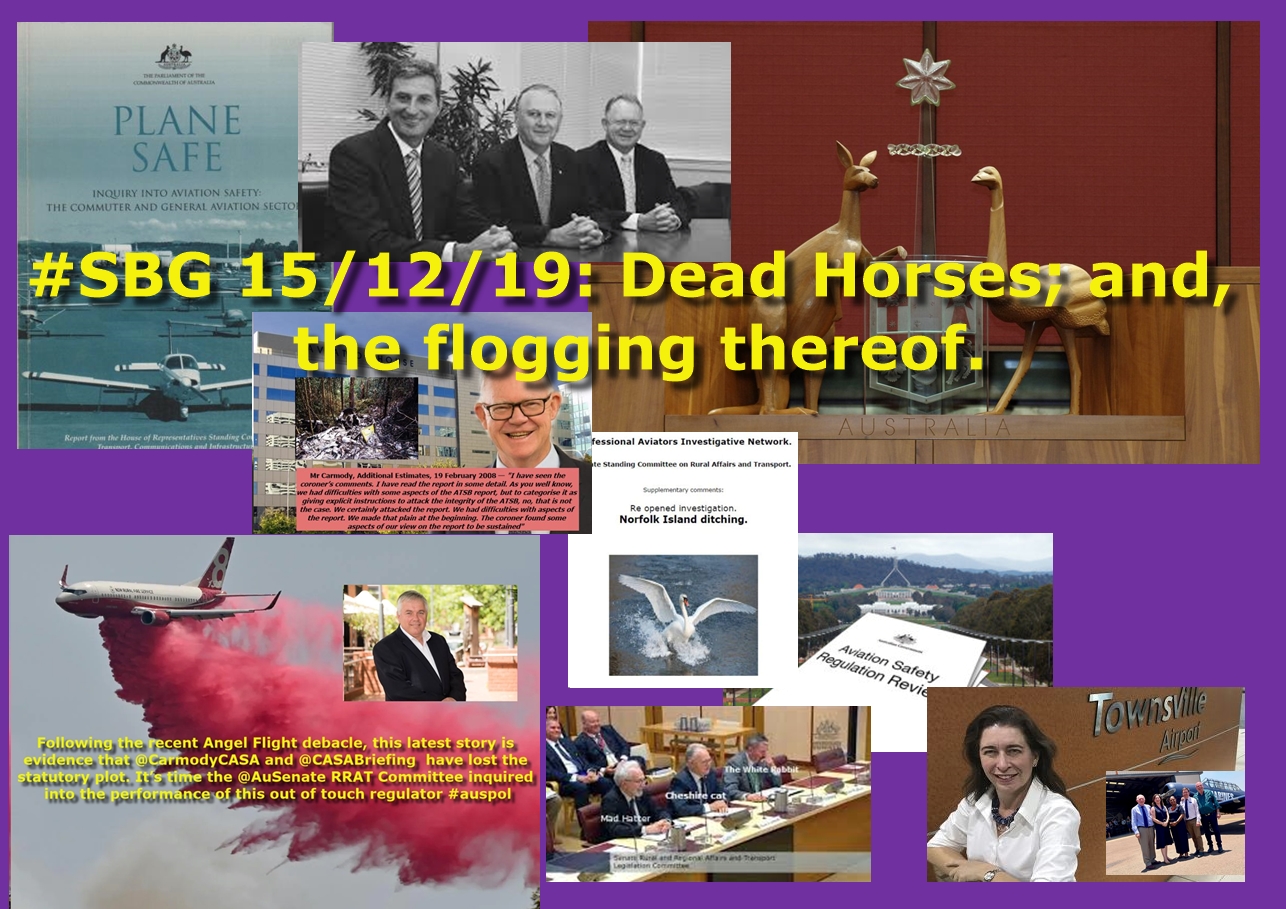 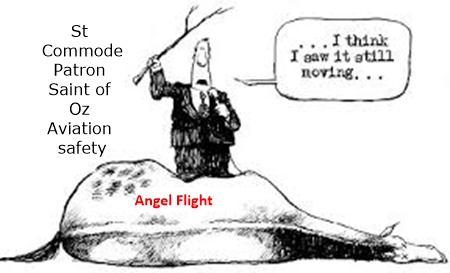 On rare occasions, the ‘heavies’ of the PAIN network have a confab. Happily, most of the senior members can manage a ‘Skype’ meeting, so all things being equal, it went off without too many hitches. Didn’t last long, 4 minutes and 37 seconds to be precise. The topic? Why, yet another Senate inquiry of course. Unanimous, brutal to the point of zero patience. “Been there – done that”. End of……How many more can we have without change? Einstein was spot on – madness.

Of course, they are quite right. Furry muff – but there was an alternative proposal which received 100% support. In short; sack the CASA top layer, bring in a DAS with a brief to ‘reform’; support sensible changes to regulation by adopting the NZ/ FAA rule set and save not only the millions an inquiry will cost; but, saving aviation the stress and unpaid work responding to another ‘inquiry’. The argument went as follows:-

(i) If the Senate committee has any power whatsoever (political and constitutional) they would be better served by sending a container load of existing hard, documented, supported evidence to the PMC and demanding ‘change’: now, in real time. They could tell the minister to go boil his silly head and clean out his ears whilst at it. There is a veritable body of evidence, going back decades, all saying the same thing. Act on it!

(ii) Whist supporting the McDonald effort, in principal; the ‘heavies’ have borne witness to 30 years of the same merry-go-round. ‘The Rev’ a.k.a David Forsyth did his very, very best to provide a soft landing for government after Pel-Air, hoping that the ‘behind the report’ unpublished reality would, through the conscience of honest men, ring in the changes needed to sustain and foster the aviation sector of the economy. Alas. Cynical, political self serving preservation gained the upper hand.

The long and the short of it is; PAIN will leave it up to individuals to make yet another submission; throw another log on the dying fire, but they will not. (Full stop). Not unless the RRAT committee ‘get real’ and take the fight to where it belongs – into the ministers office. Then, maybe, they’ll weigh in.

“Please explain” howls the mob. OK. I shall try. To begin with, we owe a sincere apology to Skidmore (him of the unforgivable neck ties). This stems from a deep investigation of the Angel Flight fiasco. Patience.. Sector Risk Analysis are the key words. Skidmore (bless ‘im) was, as we all are, a great supporter of such things. Forbearance while I describe (in my left handed fashion) the concept, in everyday terms. It’s simple really, you do it every day; chief pilots and fleet managers do it three and four times a day; folk who manage ‘risk’ are at it 24/7. A simple example is the internationally recognised Controlled Flight Into Terrain (CFIT) analysis Flight Safety provide. Essentially, one answers the questions related to ‘routine’ operations and come up with a numerical value – of risk. Say 24 for an example. Then a ‘job’ turns up which is out of the ordinary. You simply run through the ‘questions’ and come up with a number either greater or smaller than the company norm. If there is a ‘risk’ identified, then strategy to mitigate that risk may be formulated and the revenue may be generated. QED.

Senator FAWCETT: I am happy to put my questions on notice, given the time constraints. Mr Skidmore, the
industry has been very positive about sector risk profiles. I would like an update on where CASA’s view is with
that process, who you have got working on it and what resources you are investing in it. It appears to be a goodway of collaborating with industry.

Mr Skidmore: I will take that on notice, and thank you very much for those comments.

Answer:
CASA considers that Sector Risk Profiling (SRP) is an effective risk management tool to assist the aviation
industry in developing an understanding of the effects of risks in order to maximise their aviation safety
performance. SRPs that have already been developed are in the areas of aerial application and aerial mustering.

In 2016 CASA expects to publish SRPs in aerodromes, small aeroplanes, large aeroplanes and offshore helicopter transport. The SRPs in helicopter emergency medical services and aerial ambulance sectors are expected to be published in 2016-17.

The profiles are developed by a team of subject matter experts drawn from CASA’s operational areas that
collect and analyse relevant data. The data and other additional information are reviewed collectively by CASA
and representatives from the relevant sector prior to finalising the SRP.

Skidmore was in favour of sector risk analysis (proven). Angel Flight on the first CASA go around were off the hook – until the day of the accident. CASA had waited and waited for an accident – then they got two. Exit SRA – enter the legal dragon; the rest, history and shame.

Senators; seriously, there are three things that could be done, which, in almost a heartbeat, would change the ethos and stop the embuggerance. 1) Take CASA off the legal hook. Honest White hats, like Buckley’s first CASA team, cannot be held responsible for ensuring that every ‘black letter’ of the law is met; mission impossible. (2) Appoint a ‘reform’ DAS with ministerial support (for the good of the nation etc.). (3) Refuse to be ‘bipartisan’ in matters aeronautical.

And, please; for the love of a Friday feed, a fight and a night of paradise:-

(4) Stop pissing about with CASA. The experiment failed. Toughen up princess. There is an out of control, paranoid, schizophrenic parked in a dark corner of the bar. It may look OK to the casual glance; but, rest assured there are deep, dark problems lurking there, for which no easy cure is available. Appoint a DAS who is tasked with ‘reform’ – not reorganisation (a crock of the proverbial). Mandate that the NZ/FAA (world’s best and safest) rule set is brought in as soon as humanly possible.

There is little need for a rehash of the old; a new inquiry? Nah. That particular area of angst has been beaten to death for 30 odd years now. Skidmore ‘got it’ Sector Risk Analysis and rules to support that risk – what a bloody good idea. 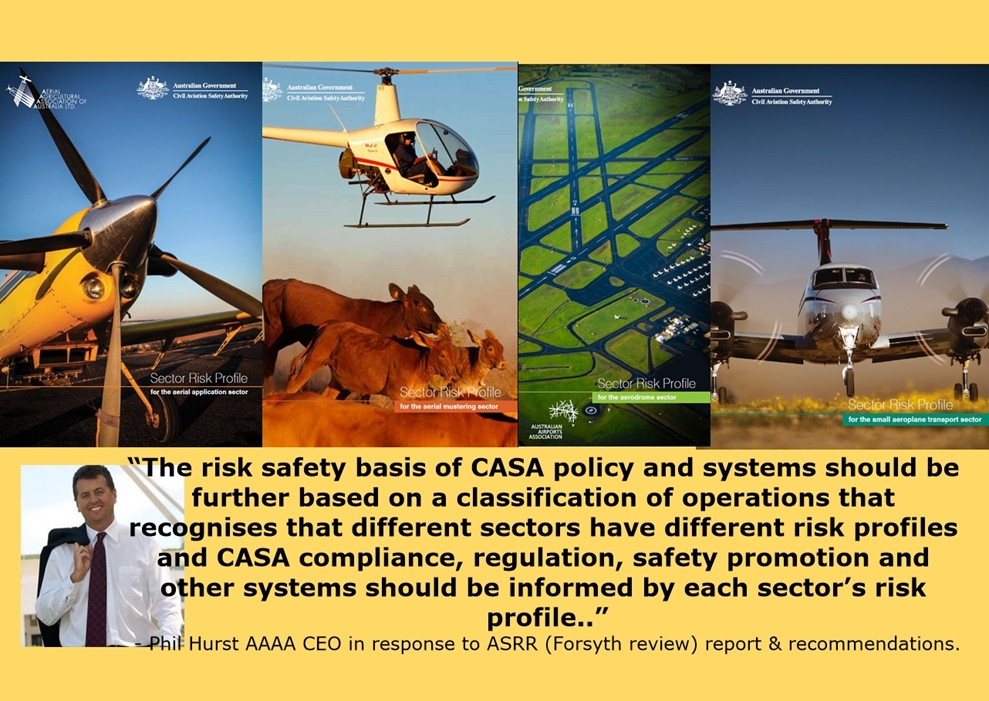 Sorry for the rough ride Mark – ‘twas your ties what done it (well, that and a large dollop of past cynicism) . Unreserved apology Sir.

That’s about it for Sunday – too damn fed up with it all to find a joke or quote. A minimum ‘wait’ time; on hold for another six years before we see progress tends to make me ‘irritable’. The path is clear, the solution is patently clear to even a blind Freddy (sorry mate), the tools are immediately available. Why would we spend another two years and gods alone know how much money to discover that which was known thirty years ago. FDS bring in some professional help. Tell you what – bring in Smith or Skidmore – I’ll go work for ‘em. Sometimes it’s better to just DIY than rely on ‘professionals’. I could operationally (SRA) run Commode and Marbles around block: twice, before they even knew what bloody day it was. – IT IS NOT ROCKET SCIENCE.

Yus; (you may not have noticed) – us is cranky – why not? I note the dogs have decided to feign sleep at the other end of the stable – clever dogs. I’ll whistle ‘em up soon, a quiet walk, far from this never ending bun fight will be most refreshing – moonlight a bonus. Serious question – how do they know I’ve just done with this ‘thing’ ? Whoa; even the cat has lobbed in to say G’day. Some species just know how to read a mood. Away now, you fur bearing, four legged felons – I shall follow. 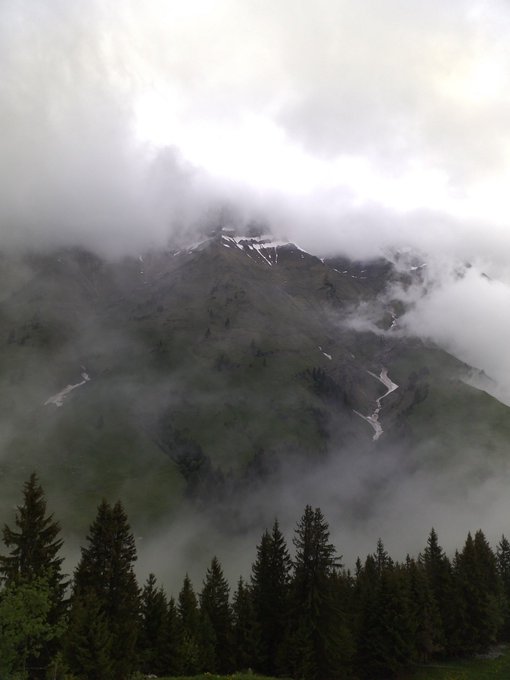