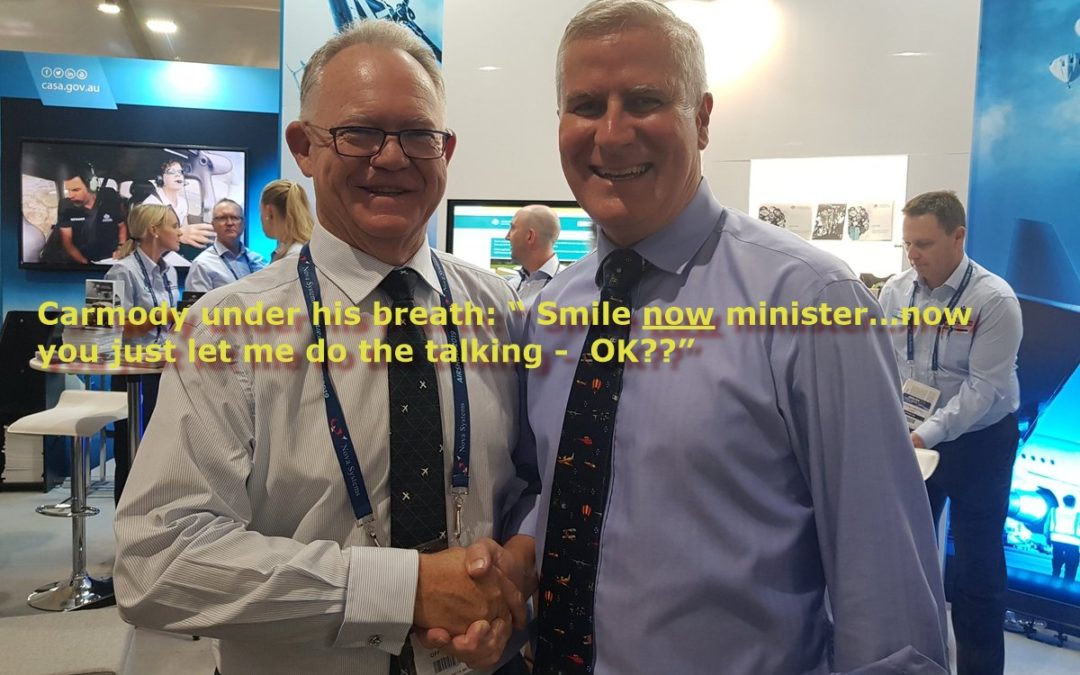 Vainglorious Ventriloquism and Vaudeville acts. – AP Forum version.
“Ventriloquism, or ventriloquy, is an act of stagecraft in which a person (a ventriloquist) changes his or her voice so that it appears that the voice is coming from elsewhere, usually a puppeteered prop, known as a “dummy”. The act of ventriloquism is ventriloquizing, and the ability to do so is commonly called in English the ability to “throw” one’s voice.”

“Ventriloquism relies on the fact that the ability of the human ear to locate the source of a sound without visual and other cues is very poor.”

In short, it is a deception. Through what the exponents call ‘stage-craft’ your senses are – with your willing participation, mislead. Enter the Dragon – here is a happy snap of St. Comodey and his ‘dummy’ – stage-craft at it’s finest.

“When one with honeyed words but evil mind
Persuades the mob, great woes befall the state.” ― Euripides, Orestes 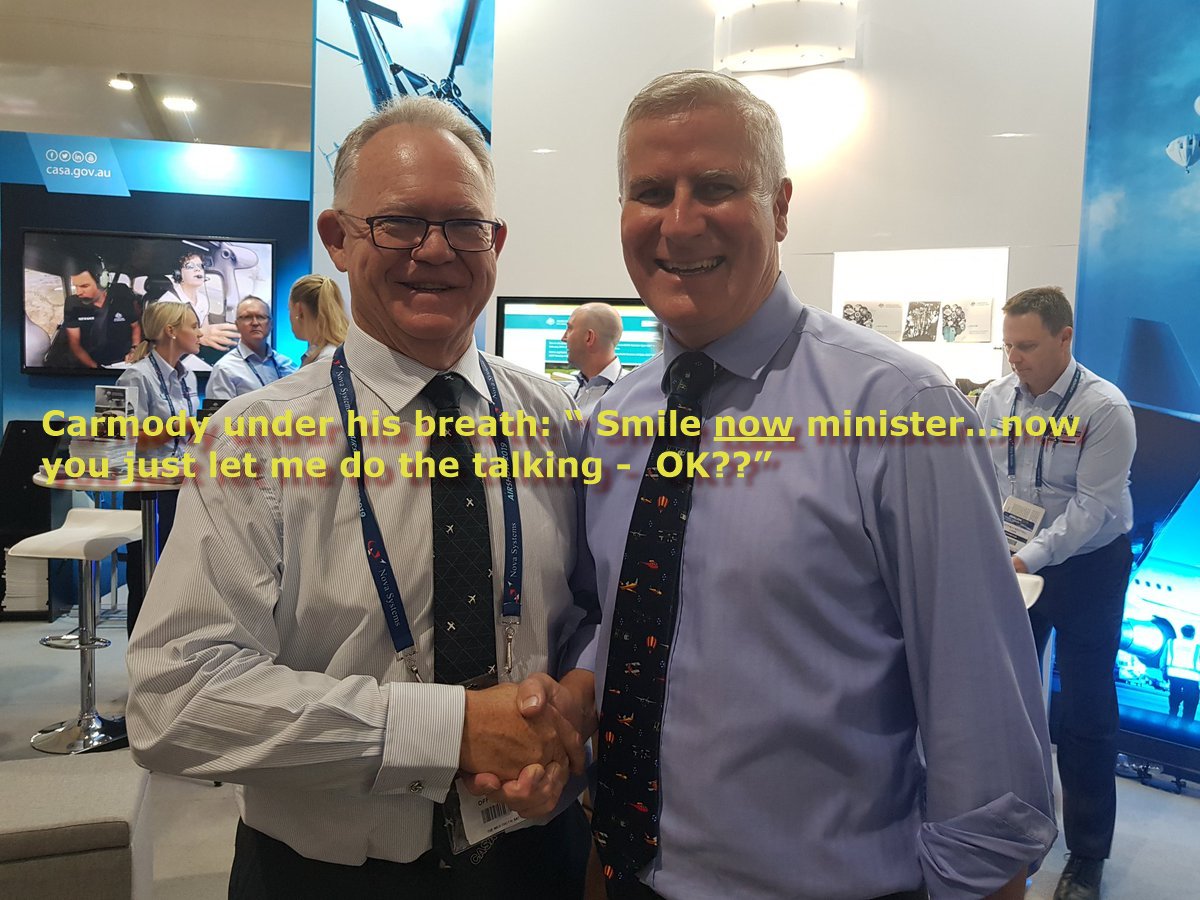 The ‘Prestige’ is all together too easily discerned in the picture; shoulder to shoulder, firm handshake and big toothy grins all around. Which would be fine and dandy – if it were a vaudeville stage act, you’d paid to see. The deception is. in reality, quite sinister. Note Comodey’s left arm is wrapped tight behind his dummy’s back. This of course is to conceal the fact that St. Comodey’s left hand is on the hi-tech control buttons. (1) Smile; (2) Nod and smile (3) Say Yes (and smile) (4) look serious (and smile) etc. It is either that; or, more worryingly, is that Doc He-who-used to do-Voodoo – (before the marble loss) has used Kool Aide, smoke and mirrors to work his magic on the dummy; giving it an almost human demeanour. Of course the public don’t expect the dummy to ever say anything that signifies. – So; without too much effort, the patent Snake oil may be sold to the ‘believers’. Such is the nature of human kind. It is only when the show is over that the average punter realises; too late, that they have just witnessed a first class con job; a sting, a most remarkable piece of psychological manipulation. We are all safe airborne – when St. Comodey is on the job.

“And thus I clothe my naked villainy

And seem a saint, when most I play the devil.”  – Richard III by William Shakespeare

For a clever little bit of legal legerdemain – take a short read of this offering – HERE – now law. A typical CASA piece of perfidious doing, gifting them even more control without improving ‘safety’ one iota. It is, alongside the Angel Flight, Bruce Rhodes, Caper and other small cases of serious embuggerance, typical of the St. Comodey led new look CASA approach to being absolved of all or any responsibility – for aviation; with (ahem) full ministerial support. But wait – there’s more; much more.

Q/ Carmody quote: “…The check on Mr James continued as we decided to deem it a private flight...”  – Besides the fact that there is many unexplained contradictions in the timeline, it would seem in the above quote that CC has tried to make it seem he was doing DJ favour by allowing the check to continue in a ‘private’ capacity – WTD??

P2 has provided the perfect example of CASA swinging a long line. Seriously, the spin and pony-pooh contained within the highlighted line defines CASA first XI methodology and spin bowling techniques. How for Pete’s sake can the flight be anything else – in law – but a ‘private’ flight – conducted as ‘Air-work’; one may also question, quite safely why there was a need for two CASA people to be on board. Seems to me there’s a ‘stretch’ of rules right there and a safety case.

“Fool me once, shame on you. Fool me twice, shame on me. Fool me three times, shame on both of us.” ― Stephen King, On Writing: A Memoir of the Craft

It is statistically unlikely the you will be involved in a serious air accident returning from a dream weekend on a secluded beach somewhere warm – highly unlikely. It is equally unlikely that you will be shopping ‘airside’ in a DFO complex which gets in the way of an aircraft in trouble. Unlikely – yes; has it happened? – Oh yes; regularly and recently. So there you sit – in the rubber tube jungle; waiting for the ‘crunch’ believing that no matter what, ‘you’ will be rescued from the inferno of smoke and fire by our superb Rescue and Fire fighting services (RFFS). DO NOT BET ON IT. You see, aided and abetted by the International Civil Aviation Organization (ICAO) it is now acceptable for no services to be ‘on-site’. Which, stand alone is a scary thought; but when that latitude is placed into the hands of a creature like the Air Services Australia boss – things become ‘murky’ and KPR driven. ICAO call for services to be available for the ‘biggest’ aircraft operating to be covered (within sensible parameters); Australia does not. The IFALPA have caught on to this anomaly – which lays the flight crew open to prosecution for knowingly operating into an aerodrome with ‘limited’ RFFS capability. So, you can be part of a thrilling crash, and enjoy the fire and smoke in the full knowledge that should the crew survive the crash – they are culpable. There now, ain’t that a comfort? Unless you happen to have your accident in Australia – . Thing’s are a little different here. The best you can expect is a Halfwit thrown under a bus, an easy target to mollify the media; comforting, arse covering ministerial speech following. –No one outfit wants to address the ‘real’ safety issues (or the SSP)  for fear of loosing ‘power’. They just want spend time and public money writing endless ‘legal’ documents which exonerate them from any ‘Duty of Care’. Remarkable what can be done using a dummy and a little stage-craft.

“His lies were so exquisite I almost wept.”― Dave Eggers, What Is the What

Of course, we have the fearless doyen of aviation safety watching over all of this – the Air Transport Safety Bureau (ATSB). They are all over the risk matrix; making recommendations and fearlessly leading the way toward controlling the excesses of the other ‘safety’ agencies. A phone call; or, even a stiffly worded e-mail will quell the more outré or recherché grand schemes -. Oh. How I wish it was so. Those seriously interested in developing ‘safety’ write things like this:-

“The NTSB also noted that the 1,000-foot runway safety area – added to Ypsilanti airport during upgrades between 2006 and 2009 – likely contributed to the lack of serious injuries.  In 1999, in response to an NTSB recommendation, the Federal Aviation Administration began a national program to add runway safety areas to many commercial airports.”

“The addition of runway safety areas at many airports are a real success story in commercial aviation, as demonstrated in Ypsilanti” said Sumwalt.  “RSAs across the nation have mitigated accidents, prevented injuries and saved lives.” 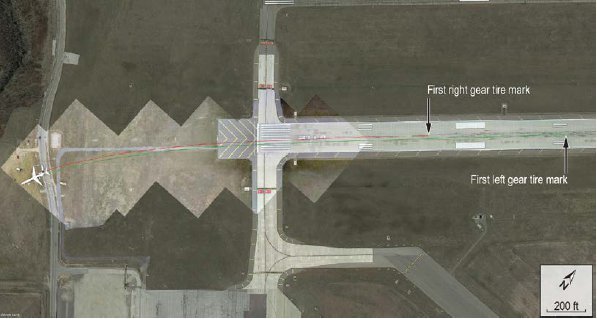 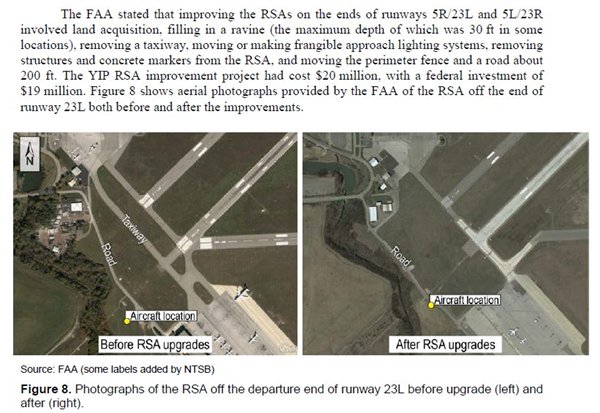 In Australia we give permission to build large buildings inside runway boundaries; then we reduce the RFFS to zero; then we compound that by making it ‘illegal’ for the local fire station to operate ‘airside’ because they don’t have their ID cards prominently on display (they don’t have ‘em to display by the by) and; then we don’t train to climb above two meters (6’ 3” old money) and won’t let ‘em use rescue saws on account of the saws are dangerous. 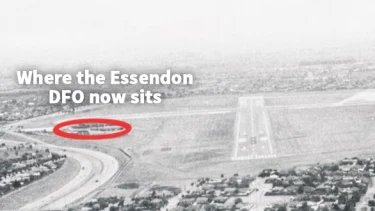 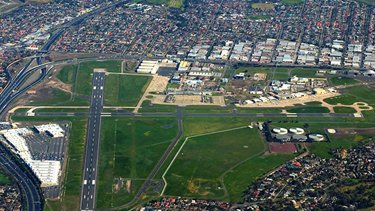 “…In the absence of the Retail Outlet Centre buildings, the aircraft’s trajectory would likely have resulted in the aircraft colliding with the Tullamarine freeway, east of the Bulla Road overpass. Dashboard camera footage provided to the ATSB indicated that there was a significant amount of traffic on the Tullamarine Freeway at the time, with potential for casualties on the ground…” – Ref: https://www.atsb.gov.au/publications/inv…-2017-024/ 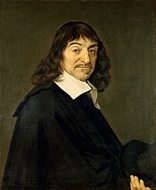 “It is only prudent never to place complete confidence in that by which we have even once been deceived.”― René Descartes, Meditations on First Philosophy

But, nonetheless we are well served. St. Comodey is on the job; taking care of the general mug punter public in all matters aeronautical. He said it himself – “I am the Man”. Bollocks. We are so lucky; that an entertaining vaudeville act, using ventriloquism and selling snake oil on the side is taking such good care of our travelling public. It is a crying shame that the pseudo ‘experts’ are all too busy trying to avoid prosecution while running ‘safe’ air services around the globe to worry about the ‘essential’ operational safety matters, which ATSB, ASA and CASA manage with such wondrous aplomb. If you doubt my word – then check out how much safer Angel Flight is now; or how dangerous Caper were until St. Comodey stepped in. You may be further reassured by the ASA comprehensive RFF arrangements for all travellers and; that the ATSB is completely on the ball, Hood had survived Mardi Gras and is completely capable of patching up all the holes in the very, very (anorexic) thin slices of our safety cheese.

“The truest way to be deceived is to think oneself more knowing than others.”― Francois de La Rochefoucauld, Maxims

By the way – I’m married to a six foot blonde goddess – ex Miss World; her multi millionaire father runs the best brewery in the world, thinks I’m wonderful; and, to top it off, she is a deaf, dumb nymphomaniac. Believe it if you like.

Aye well; a man can dream, or could anyway. No matter, I am properly humbled; P7 finally got home (safe) and popped in as soon as jet lag allowed – I showed him the Cypress chest and the little ‘niggles’ I had with some parts of the joinery. No words; he picked a one inch chisel (thankfully properly honed). Tinkered for a few minutes and ‘presto’ all fixed. “What have I said about patience boy” say’s he – “Now, be a good lad and fetch an old man an ale”. One day, I will learn. Funny thing though – the dogs hung about outside until he was settled in his favourite chair and the top inch was off the Ale – then they gave him a proper welcome. I just sat quietly and enjoyed the whole thing. The smells of Ale, Cypress Pine, cigar and wet dog all melded with the stables very own signature. Wonderful – alas, my glass is empty but there’s more on tap and the Gazette is done. Time for a chat, all the time I need. Colour me happy.

“In every age it has been the tyrant, the oppressor and the exploiter who has wrapped himself in the cloak of patriotism, or religion, or both to deceive and overawe the People.”― Eugene Victor Debs, Voices of a People’s History of the United States