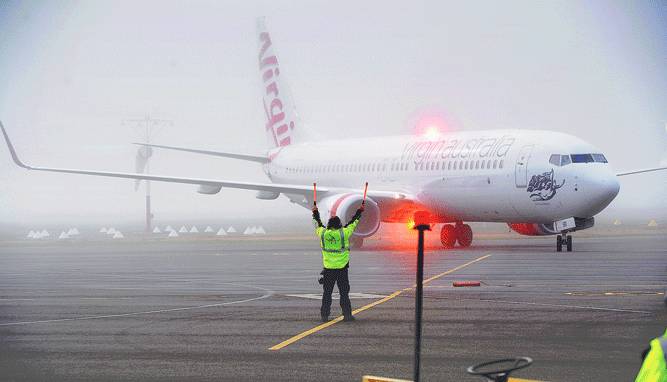 “The ATSB found that the dispatcher for YID could not visually confirm the position of VGR relative to gate D2 and assessed that because the aircraft hadn’t moved, it was on the gate. The pushback ground staff followed the normal practice for a pushback from bay E1. However, this practice did not allow for visual monitoring of the left side of the aircraft, such as by using a wing walker. This meant it was not possible for the dispatcher to identify the collision risk in time to prevent the collision.”

The Sandilands article – HERE – begins by describing the ground collision between two aircraft as a super market car park bingle, then, after skipping several essential omissions in the ATSB report, takes a shotgun approach to the wide range of problems ATSB have, hitting the odd one or two, while the flock escapes. Missing an opportunity for a defining snap shot of where the ATSB is utterly failing the nations travellers.

ATSB – “This occurrence highlights the importance of ensuring that adequate clearance exists prior to commencing pushback. This includes using sufficient personnel to ensure visibility of each side of the aircraft at all times.”

The ATSB statement above, properly analysed, is terrifying.  It clearly defines the utter ineffectiveness of the agency, at all levels.  It also clearly defines the willing emasculation of the ATSB under Dolan.  I shall try, in my clumsy way, to make this simple for the politicians who need to get off their collective beam ends and make sure that either (a) this report is the tool used to close down the ATSB, disband it and save a fortune; or (b) return the ATSB to its proper role as the primary, independent arbiter of ‘safety’.  ATSB  cannot be allowed to wallow along as an ineffective, toothless, captive waste of time and money.  Australia is now so far away from true ICAO compliance that, if we were honest, a token ‘investigator’ parked in an office at the rear of the CASA building would suffice and be on a par with the other ‘token’ ICAO compliance requirements we need to be ‘seen’ to meet.

A good question; but not the first from ‘Dan Dair’ – “Now I think about it, I’d have probably asked what systems of assessment the airline or ground handler has in place before pushing-back an aircraft.”

Anyone who has suffered through a crowded shopping centre car park will understand what a busy air-side parking area – Ramp – is like when it is busy.  Arriving and departing a ramp (or gate) is probably one of the most dangerous parts of the entire journey.  Think on – a vehicle, about half the size of a football pitch, without rear view mirrors needs to be reversed about 100 meters into traffic.  The typical 737 is 12+/- meters high, wing span in the 30 meter range and some 35 meters long and weighs in somewhere between 65,000 and 85,000 kg.  I’ll leave the Kinetic energy calculation and the calorific potential in the fuel tanks to you; but it’s a big number.

To get this aircraft ‘pushed-back’ onto a live taxi way requires the coordinated effort of every safety agency we have and the company ‘system’.  It is a massive effort; laws need to be in place through parliament; CASA must turn that law into a rule set which define responsibility, procedure and method. The company must transmogrify that rule into practical, workable solutions, develop a system which ensures legal and operational safety; train staff within that system and maintain the machinery which completes the act.  Flight crew need to be trained to comply with their end of the story and provide the essential link between traffic control and ground crew.  The ATCO managing the ‘ground control’ station has to coordinate traffic all over the aerodrome; from newly landed off the runway, those moving to designated parking areas and those pushing back to begin a journey.  Why is the fool rambling on about this? – well, consider the amount of links in that chain; the potential for an incident is huge.

The point I am labouring to make that somewhere, somehow a link in that safety chain failed and an incident occurred. But which link and why?  It is for this answer we must depend on an impartial ATSB.

Were the company procedures robust, did they comply?
Was the ATC sufficiently trained?
Did the CASA approval of the procedure comply with safety rules?
Did the tug driver make an error.
Were the sight lines obstructed?
Was fatigue an issue?
Was lighting a problem?
Were the push back lines clearly defined?
Who is to make the adjustments to procedure to prevent a reoccurrence?
Who is to approve those adjustments?
What new procedures have been initiated?

I could, if pushed, develop a page of questions which should have been answered.  I would bet a beer or even two, that the companies involved Safety Management Systems (SMS) asked and provided answers to those questions, and more.  I have no doubt of that; but I cannot prove it as fact.  The findings of the ‘internal’ investigations will, quite rightly, remain private.

The ATSB public findings will not assist in the prevention of a reoccurrence; why?  Well there ain’t any; well, not any that are worth a good god damn.

I have no quarrel with SMS.  What I object to is that there may have been a slackening of requirements which allow a company to legitimately reduce (for example) say the number of personnel required to effect a simple push-back; which increases the risk of a repeat.  We don’t know and no one else is telling the tale,

Perhaps it’s just my curiosity curse, I like to know what happened and what was done to prevent it happening again.  For this I rely on the ATSB; if the ATSB cannot provide those answers; then what is the purpose of them?

Long ramble over, but it seems to me there was a little more to consider than a simple ‘beg-your-pardon’ in a carpark.

“Just be careful crossing the road kids” – last words ever heard by young Jimmy as he chased the bouncing ball.