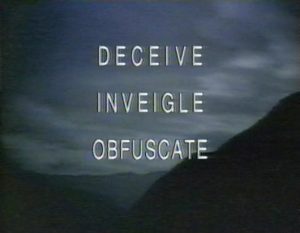 Mr Carmody: Airservices and the CASA actually had a joint board meeting last week—which happens infrequently, I understand. There was a discussion. One of the questions that was asked between the two organisations was about what the impact of the redundancies was. We work very closely with Airservices in looking at what they are doing in managing the regulatory framework, so we have been aware of where they are going for some time.

Senator STERLE: What was the outcome? Can you share that with me?

Mr Carmody: The outcome of the discussion was that there would be no impact on aviation safety.

Senator STERLE: Where I get a bit baffled—I understand these things happen from time to time—is how you can have 1,000 people that are surplus to requirements. How does that work?

“Where I get a bit baffled” Sterle said. Well FWIW, that makes two of us.  The slippery answer to a very big question is a glib, throwaway line – “[that] there would be no impact on aviation safety”. Just like that – nothing to see here. Sterle battled on for while; he actually missed his natural ‘trigger’ by a whisker. CASA ‘regulate’ ASA – anything major ASA do, like, letting up to 1000 people go, may rightfully be classed as a ‘major’ shift. Now I ain’t boss of CASA; but, if I were, I’d want a bloody site more assurance than “there will be no impact etc.” In fact I’d want a ‘tiger team’ on the ball 24/7 to absolutley, hand on heart, guarantee , assure the minister and anyone else who cared to examine the process that CASA had 100% confidence in the holistic ASA safety case. A simple sit down, with a couple of questions asked would just not do. Imagine, – CASA are looking at an operation you run; in walks the sleek, chubby FOI team to have a little look at your proposal; can you, in your wildest fantasy, imagine #1 Bully-boy saying “ Well mate, will this have any impact on operational safety?” Then you reply “Oh no, the changes are rock solid safe, no worries”; then; the CASA crew saying “Well, that’s just great; thank you, see you next year then; we’ll send the approval through tomorrow; have a nice day”.  BOLLOCKS.

Mr Carmody: That is a matter for Airservices, who are on after me, but I think the point that they made very clearly was that there would be no impact on the frontline services that they are responsible for—air traffic control, and aviation rescue and firefighting services.

But, but, CASA ‘regulate’ and licence ASA; CASA is even supposed to ‘audit’ ASA once every blue moon. Suddenly, the airy assertion that not only ASA but ‘air safety’ has little to do with CASA. BOLLOCKS.

Mr Carmody: I presume that they have contracted out some non-core services. I do not personally know the answer, because I have only been in the chair a few days. What I did seek was an assurance on aviation safety.

Ah, see here, now we have it “non core services”. It begs the questions; if those services were not ‘core’ WTF what were they there for? Why do they even exist? Why have ‘non-core’ services been allowed to grow to where there are 900 jobs, all of a sudden not there any longer? And WTD are ‘core services’ anyway and WTD are ‘front line services; definition required? Hell yes.– Slick, glib – BOLLOCKS.

Then Sen.Gallacher (bless) weighs in; he looks as baffled as Sterle does, but he has a swing at it anyway and scores a couple of  solid hits which were, alas, once again, not capitalised on. The devil, dear Senator, resides in the detail.

You see, the percentage chance of a large passenger aircraft crashing and burning on a runway are pretty slim; let’s face it. It costs the proverbial arm and leg to keep the RFFS on site, in fact a statistics realist would say the entire service is not required. However, where would you find a politician, of any stripe, brave enough to remove the service? Short answer; their ain’t one, not on the face of this planet at least. So we have a situation where a monopoly with a licence to print money is going down the fiscal tubes.  Savings must be made, due to incompetence and over spending on consultants and such like. So the easy answer is to up the numbers threshold for providing RFSS; statistics support it and it ensures the bonus payments keep rolling in. If the unthinkable happens and there is, one day, a pile of crispy critters at the end of a runway without RFSS everyone’s arse is neatly covered, even the toasted ones; probably with a blanket donated by St Vinnies.

Mr Mrdak: The intention, were the threshold to change, is that the existing services would be grandfathered, subject—

Senator GALLACHER: So the trigger would not apply to them—there would not be any additional redundancies?

Mr Mrdak: There would be a view to establishing threshold points at which, if traffic fell, then the airport provision would be reviewed through a risk assessment—if traffic levels fell below a certain parameter.

Bound to be a reduction in traffic over the next few years; not like the last few where it has increased.

Well, its getting late, dinner smells about ready and I’ve been through this Hansard a couple of times now; so I’ll stop, with MMTF, later. But I will leave you with some immortal words to consider.

Mr Carmody: If I may, I do not need to manage their business for them; I need them to maintain a safe operating environment.