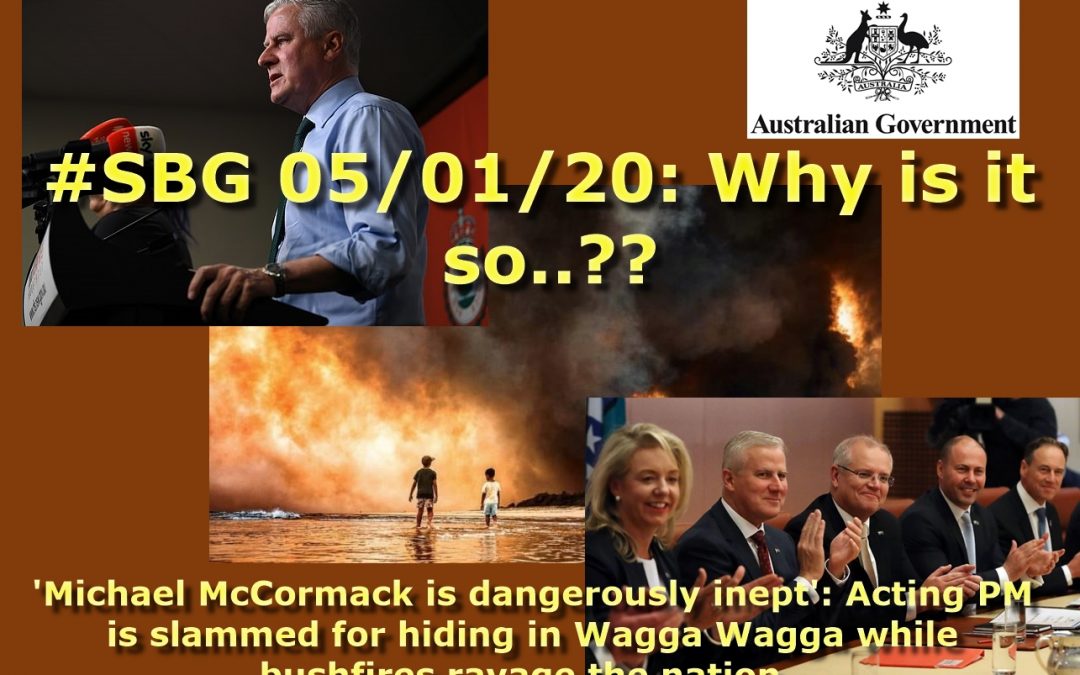 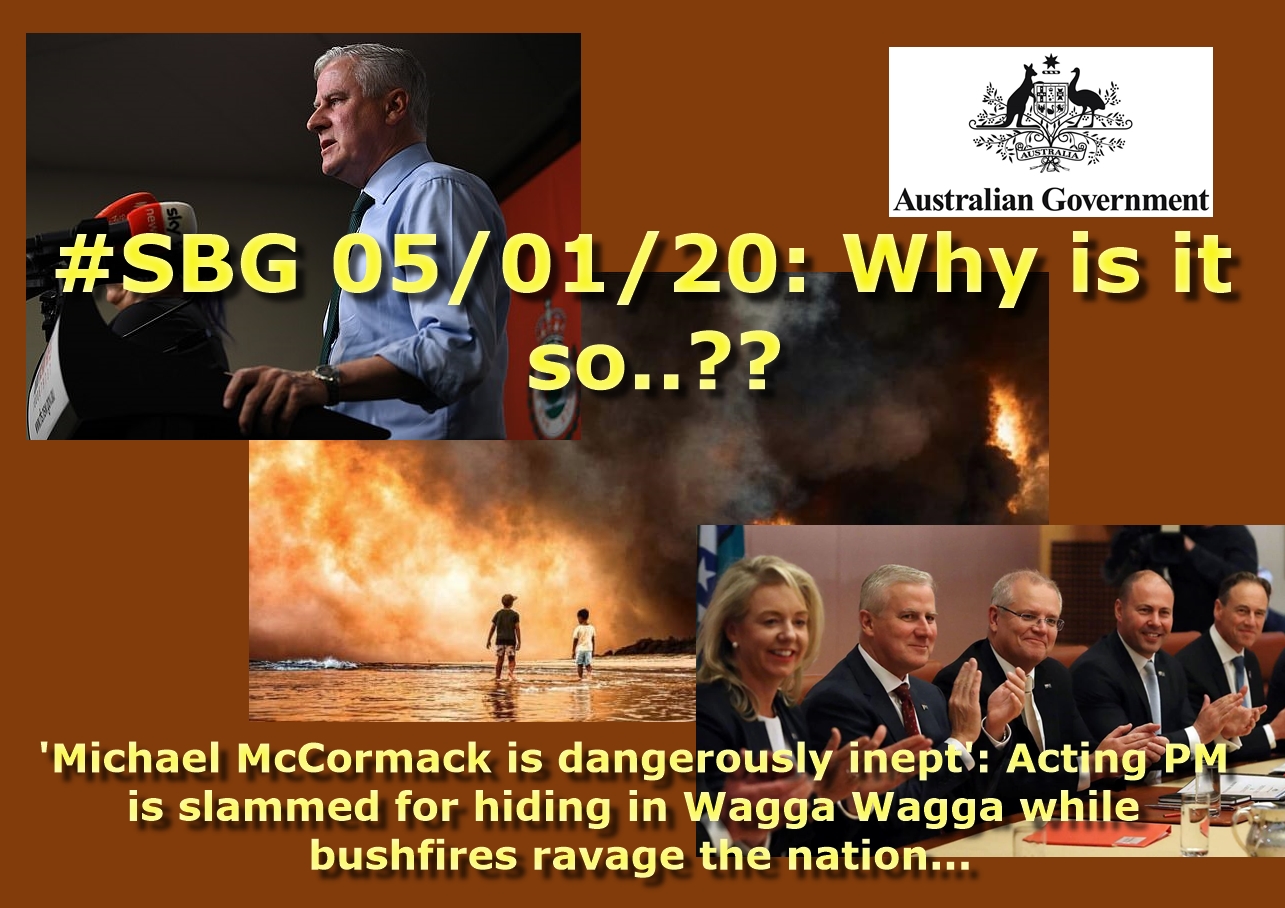 Refs: https://www.dailymail.co.uk/news/article…anure.html & As Australia burns: Whatever happened to the L for Leadership?

Why is it so: or, WTD are we paying for? – AP Forum version.

Or, when red faced, roaring lions become lambs. I am reminded of an old phrase:- 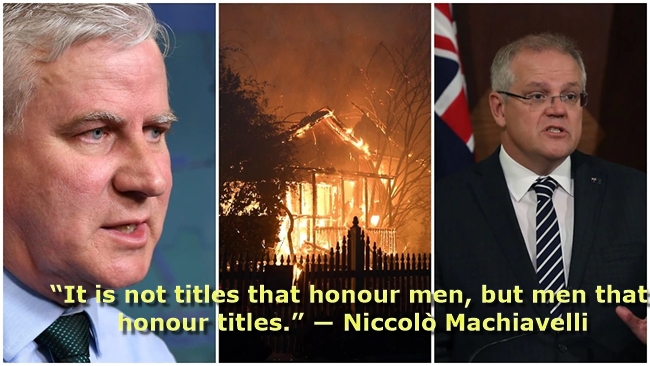 This was ever true; a ‘leader’ is someone to whom ‘we’ give ‘command’. A chief pilot is an example; top dog, boss of the wash etc. It is normal and a recognised requirement that should the chief be away on holiday; or, in hospital, after falling off the trapeze at the cat house; there is always a ‘deputy’. This is a responsible position, a fail safe; one which allows ‘operations’ to continue as normal. Same-same at sea; same-same in almost any endeavour you can think of. The military know and understand this phenomenon very, very well. The ‘chain of command’, when broken, repaired – almost as quick as winking.

It seems this is not the case in the governance of Australia. Consider, if you will, in simple airman’s terms, the CP (Boss) is off on leave, the 2IC holds the fort – then, the whotsit hits the watcuhamacallit. What does a good deputy do? Yes, that’s right, he bloody well gets on with it; sorts the mess and does ‘whatever is necessary’ to remedy a given situation.

Not so our DPM. The ‘boss’ is on holiday – furry muff. The land catches fire – big time.  Where was our DPM? This question time faker, this red faced ‘roarer’ , shouter of the odds, (and lover of ‘children’s poetry’). The boss was away – did he step up and take the reigns? No, he did not. Has the Deputy PM made one worthwhile contribution to the bush fire emergency? Has he consulted the PMC for advice of how best government may assist; troops, machinery, man power, even filthy money? Nope. Not a ducking sausage, not even a slightly singed pigeon with a message from the Wimp of Wagga.

Oh. He did make some soppy ‘twitter’ comment about a friend who survived the inferno; but that was about it. Darren Chester meanwhile went to work and moved stuff to assist. Victoria owes him much more credit than he claims – Bravo. He was mislead in the management of the aviation portfolio; but he at least had balls and brain enough to sack his CASA ‘advisor’. Only McCormack could be dumb enough to allow the same advice to make him, and government seem fool.

ScoMo was ‘on leave’ – so what? The DPM should have stepped up to the crease. He failed to do so. Just say, Canberra was hit by a bomb (Shush) and we not only lost the PM but were in a hostile situation. The fate of the nation would the depend on the Witless Wonder from Wagga. Gods help us all if a national emergency floors him – what chance Oz when real trouble lobs in? If I ruled the roost, I have this useless bully burned in effigy at every burned out home I could find. Leadership? – Bwaw Ha Ha – Aye, may Pagan gods help us.

Not in a position to advise a PM – but old mate Machiavelli was; he said this:

“The first method for estimating the intelligence of a ruler is to look at the men he has around him.”

The PM should consider this advice, carefully – not only is the DPM job an important one in time of crisis, it is essential to the stability and ‘confidence’ in government a country has. You have a gullible, incompetent fool running Transport and Infrastructure – is this wise? A deputy leader of this nation who can hardly tie his own boot laces, let alone lead a nation out of crisis. I say a CP should be able to take a break, knowing that his 2IC has his back and will get things ‘sorted. It is your call PM- you d’ boss. But I don’t see Barnaby or Chester sitting in a corner wringing their hands. Look at Patrick’s style – cometh the hour – there is the man. (Navy trained – of course). 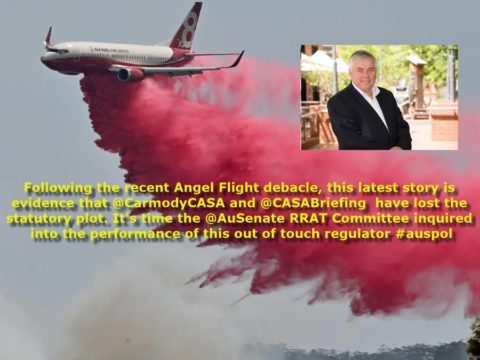 Aye well, the PM would not know of Aunt Pru if she bit him on the ass (big target); even if he did, I doubt my twiddles along with countless others would even get past the first line of defence. But I’ve said my say – as I see it; and, can do no more.

No matter; hell, I nearly dropped my Ale; dogs making a hell of a fuss. Ah, ‘tis but TOM, with a fair amount of quality Tasmanian Blackwood, rescued from destruction. Cunning blighter, he almost thieved it – cost a slab of beer. Pleased to be shut of it the boy’s on site said. I can see chocolate coloured shaving, tinged with gold being reformed into serviceable, useful (we don’t do much ‘decorative) – things like the architects order for a staircase. Those are fun to make, most satisfactory when complete and installed. “Ale with you” says the man – “after we’ve unloaded the plunder” says I. As we work I wonder – how much wonderful wildlife and timber have we lost, and whether those in power realise the loss.

Ours is not to wonder why. Ours is just to do or die.”

P2 comment: The final word from our Muppet Mick Mack, via the Betoota Advocate 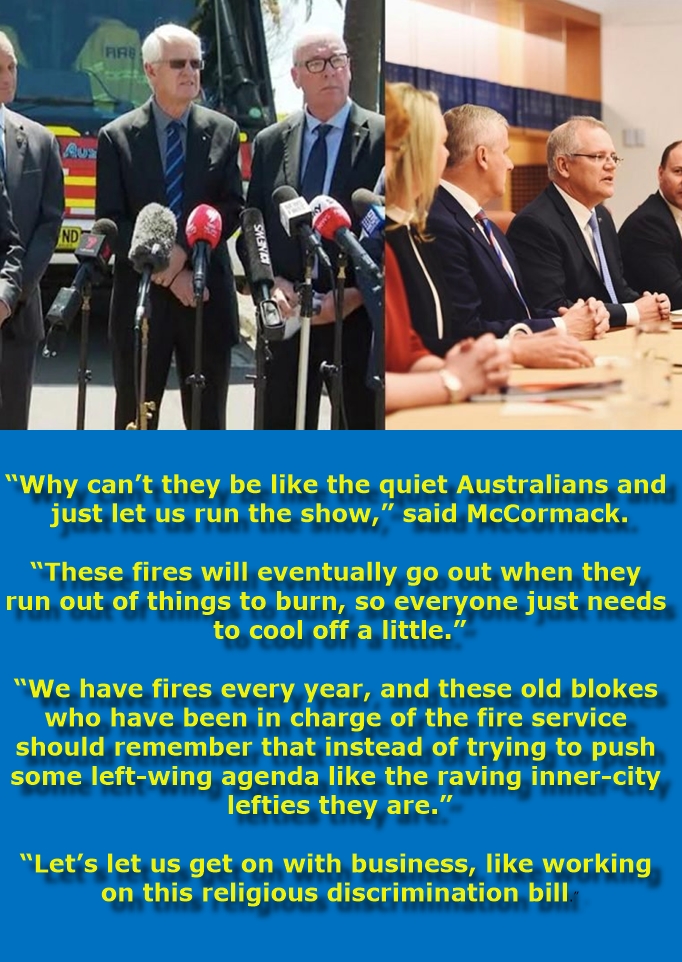