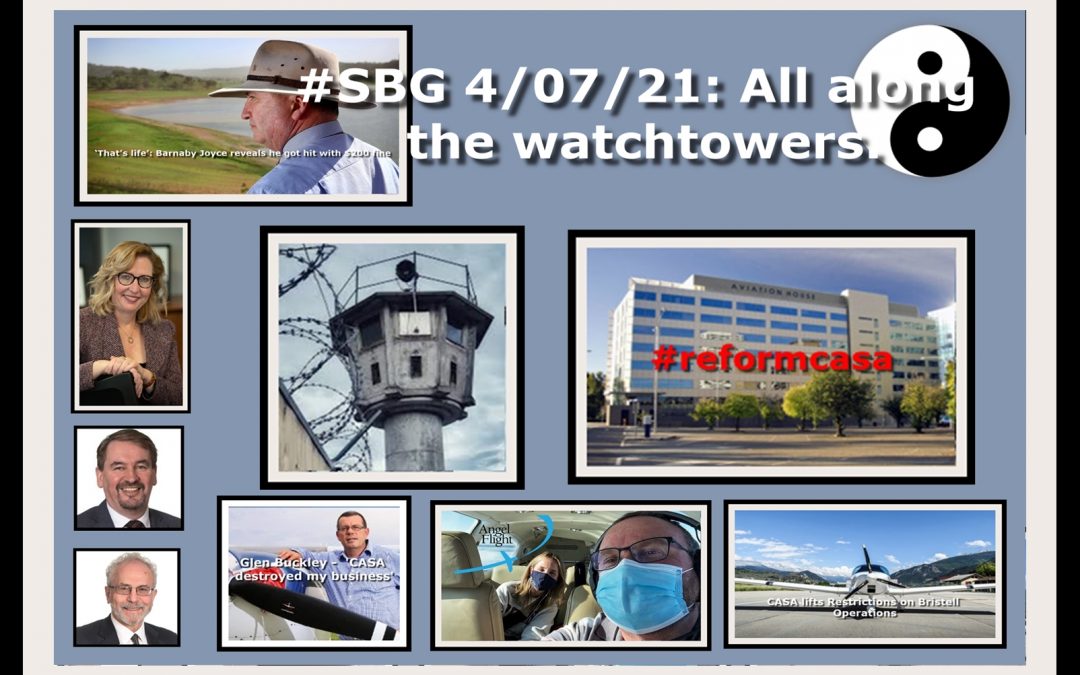 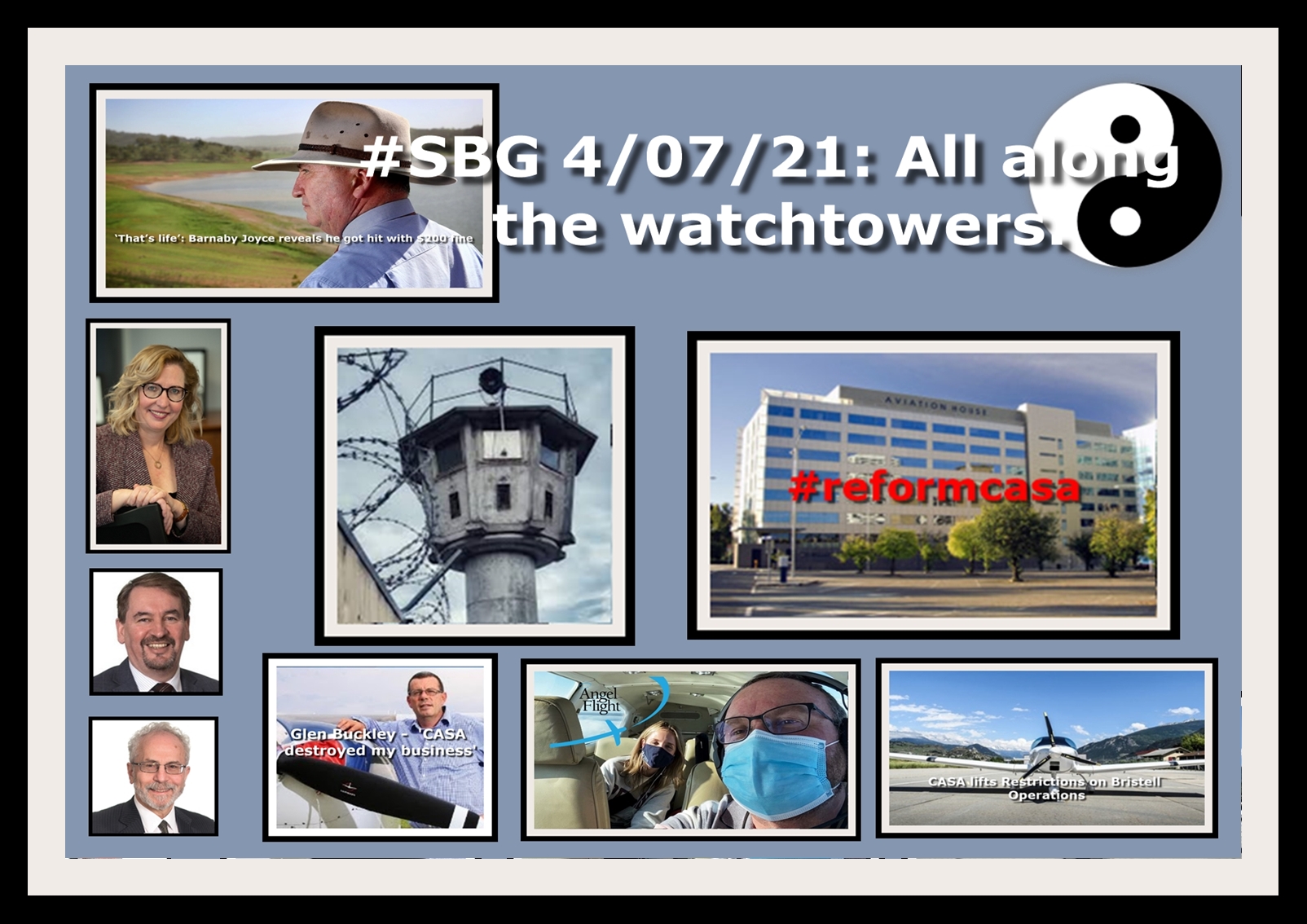 All along the watchtowers. – AP Forum version.

There must be some kind of way outta here

Said the joker to the thief

There’s too much confusion

I can’t get no relief

“There must be some kind of way outta here”

One line from a Dylan song – explains both the ‘Ying’ and the ‘Yang’ of both CASA and Master Buckleys ‘dilemma’. And yet, despite the veritable ‘avalanche’ of words – from both sides – there is no clear pathway defined. Indeed, it seems as though CASA woke from it’s somnambulist, self induced power dream and realised that they had been trumped by their very own ‘law’. Law designed to provide complete control over the ‘flight training’ sector, (well barring RaOz). Hell, even Big Q had several attempts at obtaining ‘approval’. But Buckley managed to thread his way the the legal maze, develop a system which ‘complied with the letter’ of the law as CASA drafted. Shock – Horror – control lost within a perfectly ‘legal’ approach which ‘used’ the regulation – as writ – to build a business model. That model provided  increased ‘operational’ standards to flight schools, those which simply could not tackle Part 142 and become ‘approved’ under that part. Buckley did it:and, offered it to business which would love to ‘upgrade’ but could not make or justify the operational distance and cost involved. In short, a better standard for all, available to all – under contract.

“Said the joker to the thief”

There may well be some understandable confusion here as to whom is ‘Joker’ and who is ‘thief’. A reasonable way to examine the quandary is to consider cui bono. The ‘Oh crap’ moment occurred when the penny finally dropped at CASA HQ. Buckley had not only ‘read and understood’ part 142 – but realised it’s potential to be ‘available’ to all and sundry. Now then, a business model which makes money is one thing – no problemo. However should that model rob CASA of revenue and control and power – well – it is intolerable. Must be stopped – not only that the perpetrator of this heinous crime must be brought to heel, crushed and vilified.

“There’s too much confusion”

Aye; many would cheerfully concur with that line. Myself included. Many long, patient hours have been spent (by many) reading through the volumes of ‘information’ provided by Buckley. Many an aged poll scratched to damn near bald, many candles wasted in the wee small hours and much midnight oil consumed;all spent considering the ‘Buckley volumes. It fell to one of our junior members to fairly put the ‘cat amongst the pigeons’ last BRB. A simple enough question which stunned a fairly educated crew into silence. “Where is the CASA document explaining their POV and reasoning?” Well children, diligently did we search the tomes; we even unleashed P2 – on a ‘go find it’ mission. For non of us had read a cognisant, reasoned explanation of why CASA had, at the death knock’ of signing off reneged on many agreed ‘amendments’ to the Buckley system which had, to all intent, purpose and logic been ‘accepted’. The simple answer is – there ain’t one. No rebuttal – just a stone wall of denial.

In a nutshell – the Buckley quandary. Many of the BRB (senior) have had serious ‘dealings’ with overseas ‘authorities’. Most of these ‘authorities’ have followed the FAA method and had cognisant explanation of the concern the authority has with a ‘proposed’ operation. The FAA will go to some trouble to point out ‘where’ your potential legal liability lays; and, by association, where their own ‘liability’ for approving your operation resides – should they grant ‘approval’. This sort of ‘discussion’ has occurred across the globe, within many administrations and is usually resolved, during meetings. The FAA will, on ‘satisfactory’ resolution, then issue ‘unique’ Operational Specifications’ which apply to the operation considered. This becomes ‘operational law’ – agreed by by both parties; it is no where near a ‘unique’ occurrence; but rather ‘the norm’. Not every operation fits neatly into a niche or a ‘pro-forma’ mould; but sense, sensibility and good will prevail more often than not. You cannot sell the FAA a crock – but, with good intention on both sides – more often than not – Ops Spec are provided.

Buckley got none of this. Slammed into a brick wall, at the last moment and, just to emphasise the power CASA holds – an industry job he managed to obtain, to uphold his dignity was taken away – by an e-mail. His gutless employer then simply ditched him. No one takes on CASA – want a dozen instances where a ‘CASA target’ has been denied gainful employment off a CASA e-mail or phone call (international even to Alaska FCOL). Let me know – I’ll send you the 20 most obnoxious. 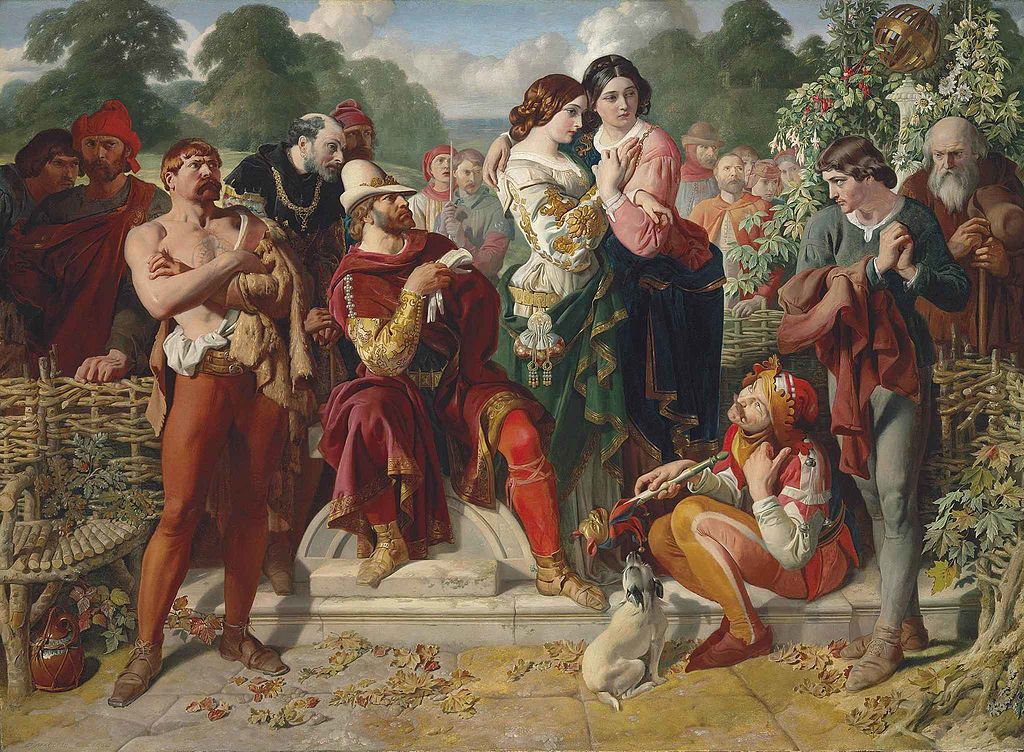 Now, my co-mates and brothers in exile,
Hath not old custom made this life more sweet
Than that of painted pomp? Are not these woods
More free from peril than the envious court?
Here feel we not the penalty of Adam,
The seasons’ difference, as the icy fang
And churlish chiding of the winter’s wind,
Which, when it bites and blows upon my body,
Even till I shrink with cold, I smile and say,This is no flattery.
These are counselors
That feelingly persuade me what I am.”
Sweet are the uses of adversity,
Which, like the toad, ugly and venomous,
Wears yet a precious jewel in his head. – Shakespeare: As You Like It Act 2, Scene 1

I am certain that most have, at least once, ‘discovered’ a ‘something/nothing’ which delighted them. I did, just this week. Twiddle follows so click off if it pleases. A lovely lady, close neighbour brought me a very (very) old, simple stool with a wonky leg; could I fix it? Piece of cake – tapered leg, splayed both ways, mortise and tenon joints – half an hour, one bottle of plonk charged (exorbitant). So I made a new leg – then I took apart the ‘joint’ – surprise! Never seen one like it before. An angled tenon with a new twist. Anyway, I managed to ‘mirror’ the tenon into the mortise; but it took the rest of the day to work out the simple ‘elegance’ and incredible strength of that joint. I wasted a fair amount of my off-cuts (firewood) bin trying to make a ‘copy’ of that stool – took a while and much cussing – but I managed it – delight, unmitigated pure happiness. As ever my faithful mates seem to know when I reach the end of my twiddles – (they lack a certain subtly); but, at least their intent is clear – the boot dropped at my feet no hint, but clear enough message. I shall follow, wherever they lead – for that is the way of partnership. But not into the river – for that is cold and wet.