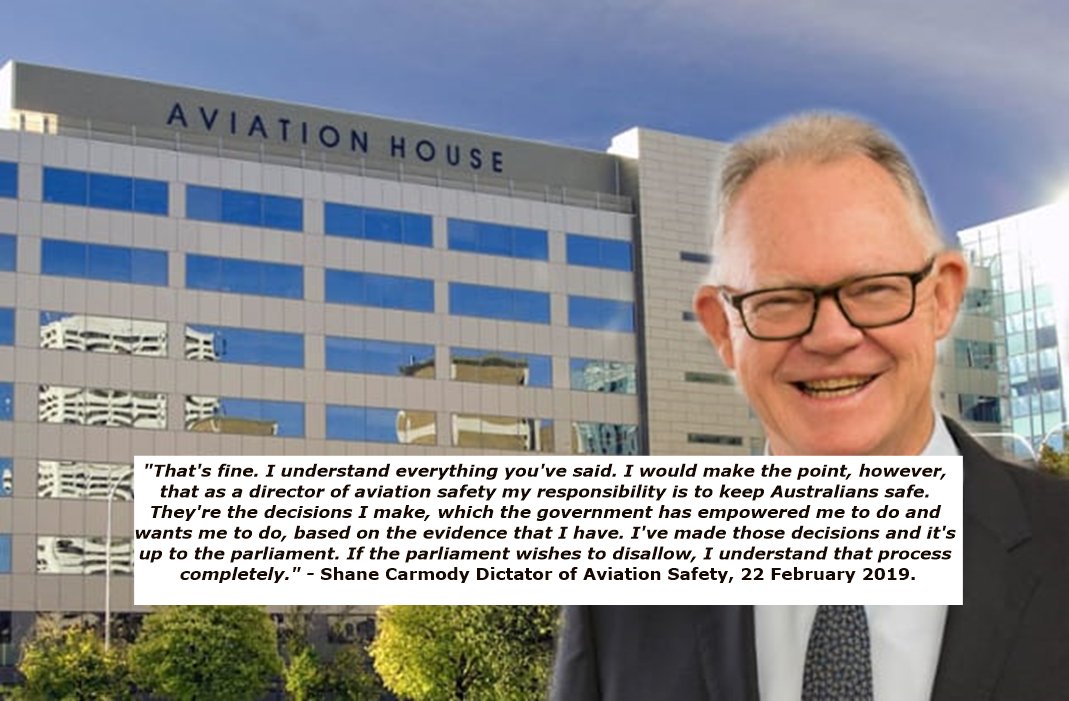 ) I have now completed the Fort Fumble Estimates video segments in five parts.

My first takeaway from watching the recordings is that the total and utter rubbish emanating from both Carmody Capers and Dr Hoodoo Voodoo Aleck is so full of weasel word rhetoric and disconnected, illogical spin’n’bollocks as to be a perfect script for a comeback series of ‘Yes Minister’ –

Listening to an obviously much more relaxed Wingnut I kept of thinking of how many times the un-elected career bureaucrat kept saying it was his decision, my decision…I..I..I..etc..etc..(cough..vomit..

), till in the end the DASictorial Carmody utters the words that we now all come to expect from these power freak aviation safety Mandarins…

Now why does that sound oh so familiar

Now let’s spot the disconnect between the autocratic, ‘law unto itself’,  make work, trough gouging world of the CASA Iron Ring and the reality of trying to make money from a regulatory embuggered industry….

I have just sat through, paying attention, to the CASA Friday special video in the Senate. I have – so help me. I even watched and listened carefully to St. Carmody; by Gad he’s good.

Mark you, when the minister is carefully managed, spoon fed and watered by St. Carmody’s very own personal aviation specialist, on loan to whichever pathetic specimen of human kind wears the Emperor’s new clothes; an overwhelming sense of confidence must be expected. Hell, with that sort of entrée and backing; you could sell the hanger cat to the public as the next ducking Messiah. So long as the minister is ‘in the loop’ and as dumb as a hammer – you are on a winner. Why would St. Carmody (the self righteous) even break wind, let alone tremble when a couple of stray Senators start asking easy, uniformed questions?

One of the more alarming elements of the whole thing is that St Carmody (ordained preventer of accidents) has either a very slick understanding of ‘statistics’ or has someone on tap who can not only make statistics jump through hoops; but is capable of making those hoops. Remarkable results – to order.  For instance hours:-

Let us examine this ‘safety’ myth that total hours can, in any practical way, relate to the safety of not only CSF operations, but ‘private’ operations in general. I have a good mate who has many thousands of hours in command of a fairly hefty jet transport – which routinely does long haul international flights; top of his game, all flight checks passed and he is bloody good at commanding the aircraft. Would I trust him to fly my family in a single piston engine, propeller driven aircraft, at night to a strange port? No I bloody well would not. Why? Well, he ain’t current for a start and not in the groove for seconds, nor does he have the toys, horsepower and systems support he has learned to rely on in his normal daily work. There is however a young lady of my acquaintance who does very little else except nurse an aging single engine aircraft about the country side, often after sunset, with very limited basic equipment and very few options in so far as power, redundancy or systems backup; yet I would, without a second thought allow my nearest and dearest to travel with her. Why?

One pilot is in current practice with the operational environment the other is not. The young lass could, perhaps get the jet started but that would be the end of it – my mate could probably get the aging beast started; and, relying solely on past experience even manage to fly a circuit or two. But, in an equal race – neither could do the others job. They are simply worlds apart. My mate has not been near an aging single engine aircraft for 30 years; our young lady has never flown a heavy transport. QED?

Yes, an extreme case study – but since when did ‘hours’ signify safety? Angel Flight could (IMO) resolve this silliness quite easily. A pilot data base which would qualify or disqualify a NVFR/IFR or VFR operation on the basis of current in-practice minimums, in compliance with the Regs. A training course which certified that AF pilots have undertaken a course entailing ‘CFIT’/ Weather avoidance analysis, flight planning, fuel management and ‘risk mitigation’ etc. Even had a ride along with a qualified person to ensure that ‘standards’ were met across the operational board. Simple enough to arrange and do. This would provide ‘evidence’ of competency, recent experience and disqualify those who were not ‘currently qualified’ from conducting AF operations until they were. Small expense incurred – occasionally – to provide a venue; lots of experienced folk willing to assist – on a voluntary basis.

No wonder Sen. Patrick say’s “I can’t quite see it” when referring to this cockeyed CASA notion of how ‘safety and statistics’ support their claim that the ‘Little Wings’ version is OK and AF is a setting up an increased level of danger to those who travel. Bollocks.

Even more remote from reality is the CASA take on ‘engine hours’ and aircraft maintenance. Ask any commercial pilot about ‘fit’ aircraft. When do most ‘mechanical’ problems appear – after maintenance. Which aircraft operate and fly the best? Those which ‘fly’ often is the answer. Which is the mechanically and systems malfunction worst aircraft they ever flew – the one which has been in the shed for a twelve month is the answer.

CASA and in particular St. Carmody continue to display their complete disassociation from the realties of working aircraft, pilot fitness for the scheduled operation and sound operational practices.

St. Carmody and his acolytes may be familiar with ‘theory’ but the view from the Ivory tower is limited; the answers are down in the grass roots and basic tenets; not in some academically dreamed up notion of a legally arguable ‘safety’ case. Practical reality; not a sound legal defence against litigation. But Hells Bells, they can’t even get the legal/medico stuff right – as the USA attorney’s are about to point out. The Mt Hotham incident should be the can opener; the Essendon DFO the worms inside that can. Will CASA get a spanking for operational ineptitude? I hope so; for it is well deserved and long overdue. It I were ‘the minister’ I’d be worried more about that and the fall out afterwards than supporting some half arsed waffle stating that sick folk getting a ride to treatment are at more risk than the same folk going shopping – in the DFO – having been given a cost shared ride into town. Pure, unadulterated, political arse covering BOLLOCKS.

Will anything ever change? Yes is the resounding answer – the revised Act, as presented, has, in legal terms imposed a more onerous, retrogressive set of requirements than the one to be replaced. Don’t believe me though – just read it, very carefully – then watch Hansard video 1 and see the smug, satisfied smirk on the wizened face of Jonathon (where’s my marbles) Aleck when it is mentioned. But please, do read the amendment to the Act – ask a legal friend to explain it – and pray to your gods of choice that amendment gets thrown out, into the garbage, where it belongs. A bonus would be the scrawny arse of Aleck following it.

But enough – I’ve only just seen the ‘vision splendid’ once; however, I can assure you, I will watch it all again  MTF? Damn straight there is……..

Mr Carmody : That’s fine. I understand everything you’ve said. I would make the point, however, that as a director of aviation safety my responsibility is to keep Australians safe. They’re the decisions I make, which the government has empowered me to do and wants me to do, based on the evidence that I have. I’ve made those decisions and it’s up to the parliament. If the parliament wishes to disallow, I understand that process completely… 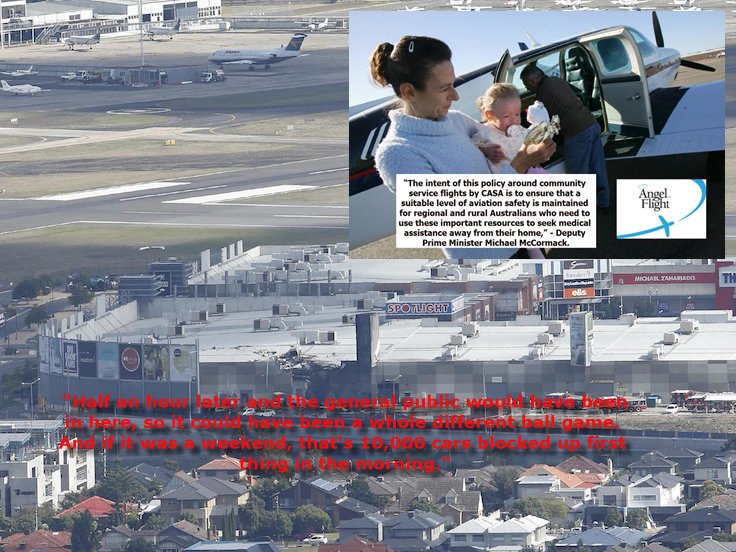 Senator PATRICK: And I’m a senator who wants to make sure that people who rely on these flights to get medical treatment also do so safely, but there’s always a balance to be had here and I’m just not sure it’s right.

Mr Carmody : There is certainly a balance, and this is—

Senator PATRICK: We can make it completely safe by banning everyone from flying, and there will be no accidents.

Mr Carmody : That’s certainly not our intent. That is why, as you know, I listened to what was said with rotary-wing and said it was not my intention to limit the field; my intention was to make sure these activities occur. But we are in the precautionary space. I cannot prevent two accidents that occurred—I cannot do that. What I can do is raise standards to prevent the next accidents occurring. I can’t do any more with organisations like Angel Flight than encourage them to raise their standards. I cannot get them to do anything else, because they are not subject to my regulatory oversight. I can only encourage them to raise their standards. I’ve done that.

Senator PATRICK: You gave every one of their pilots a licence.

Mr Carmody : With respect, they would say they are not their pilots.

Senator PATRICK: Okay. Sure. I’m done, Chair. Thank you very much for your time, Mr Carmody.

ACTING CHAIR: Just to follow up what Senator Patrick said: I think the reason we are both concerned about these regulations is that we’ve heard from the general aviation sector over a long period that they feel they are being squeezed out of existence by the level of regulation they face. As Senator Patrick said, we could make things a lot safer if everybody stopped flying, but I don’t think that’s where any of us want to be…