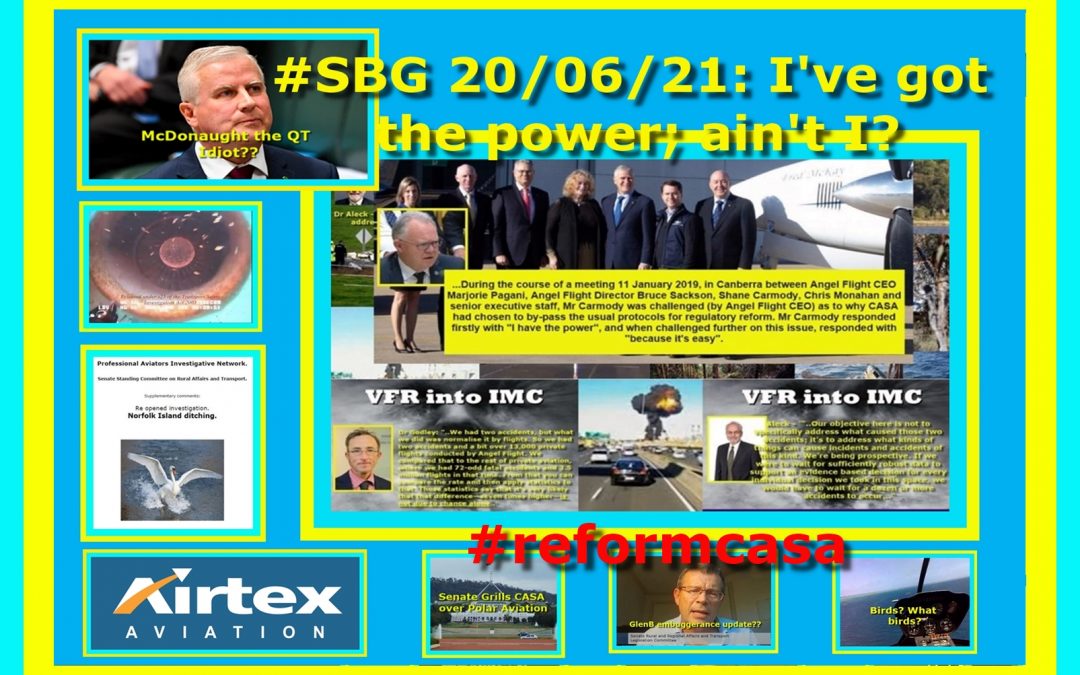 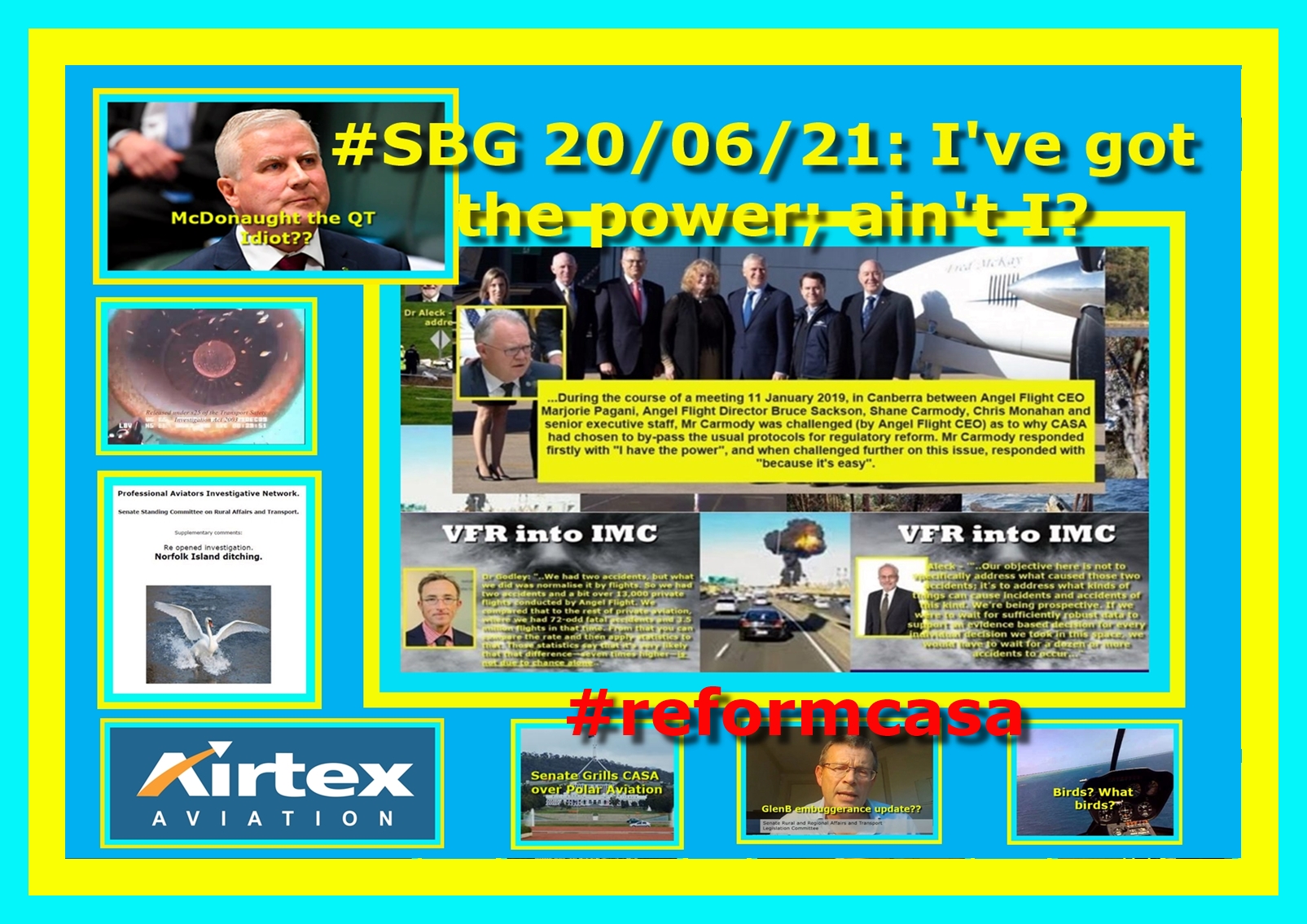 The sheer arrogance of St. Commodious ably supported by the whispering of Aleck behind the curtains; and, control of the CASA board;and, a lazy hands off bipartisan government; and an idiot for minister must have been a heady mix. It was, for a honest ‘reform’ DAS a gift from the gods. Seriously; a series of small miracles could have been pounded out in march time – and an industry saved. Alas. 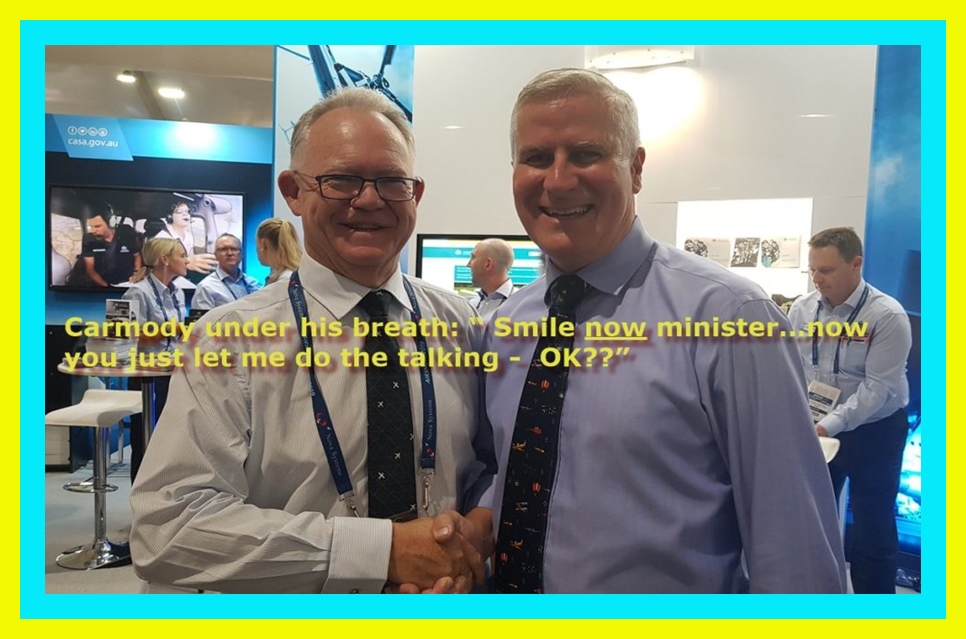 “and let the devil

Be sometime honour’d for his burning throne!” ― William Shakespeare, Measure for Measure

The rules aviation must – under threat of fines, jail and strict liability comply with beggar belief: this is a given, an unholy mess. But let us, just for a moment, step away from the incredible legal morass and the massive tomes which feed it. A practical view is required here – an ‘operational standpoint’ if you will. There are a couple of ‘classic’ examples, which, to the operational mind are bordering on the bizarre. For example – the ‘Flight and duty’ rule set. In lay terms – flight crew get ‘tired’ – fatigued even; to a point where it affects ‘judgement’. Look no further than the Pel Air ditching to see how ‘fatigue’ and company ethos played a significant part in that event. Human factors are a very real study in this case. But I digress. The point the fool is clumsily trying to make is that all flight operations are slightly ‘different’ and so the ‘fatigue levels’ inherent are as different as the operations conducted i.e. they are ‘individual’ – stand alone, company subjective. There is no one who could write a ‘rule set’ to suit every operation. It simply ain’t possible. Now, CASA – in it’s collective wisdom is attempting to make a condom for fatigue rule – one size fits all. A rigid ‘limitation’ which must apply to all. This cannot be done – well, not the way they have set about it. Take a look at the rules for PNG or NZ. There you will find simply set down the ‘maximums’ allowed within a certain time frame – end of. The responsibility for fatigue management then rests with the company within the broad strokes of the law. There are no exemptions writ – ’tis for the operator and crew to refine their own system – this then becomes the company writ ‘exemption’ – as required to meet operational demands – not some arbitrary ‘figure’. A company management, flight crews and HF should be able to come to an agreement, independent of ‘authority’ as to how they manage the ‘fatigue’ levels of their own operation – not dependent on some ‘exemption’ granted by the gods. Exemptions smack of all kinds of nasty things. The problem of course is that there is no one (not now) who can examine a ‘company’ FRMS and advise on suitability. Australia is stuck with a complex rule set which begs ‘exemption’ – so what value the rule set then? Non. Non whatsoever, despite the millions spent on it. 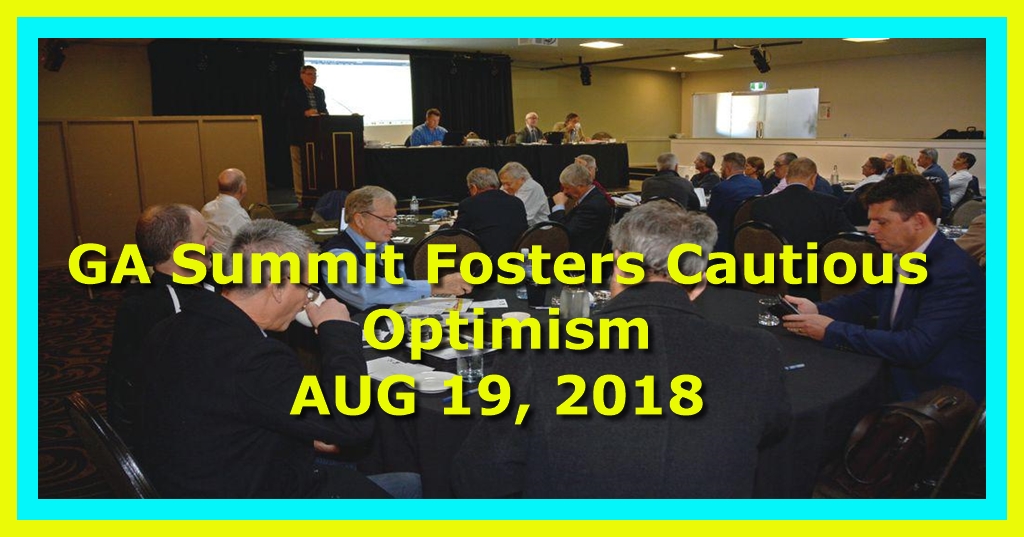 “When I think of how much this world has suffered; when I think of how long our fathers were slaves, of how they cringed and crawled at the foot of the throne, and in the dust of the altar, of how they abased themselves, of how abjectly they stood in the presence of superstition robed and crowned, I am amazed.” ― Robert G. Ingersoll, The Liberty Of Man, Woman And Child

But wait; there’s more. The Angel Flight case needs to be examined. Bear with me  – won’t take long.. From an operational, logical, legal and HF point of view; the CASA dictates are flawed – borderline incompetent. They have simply made a ruling on ‘minimum’ flight hours required. There is no attempt made to examine, let alone consider the very real – if not immediately obvious – subtle operational hazards faced by the crew operating. There has been no attempt to examine why pilots qualified for ‘good weather’ flight have persisted into serious instrument flight conditions. AF lost two aircraft – the general industry has lost double that number. Over the last decade this phenomenon has caused – how many fatal s? And yet their solution is to up the ‘minimum’ flight hours and some silly bloody nonsense about maintenance. This has not only cost the tax payer a shed load but is a totally – ‘operationally’ flawed approach. But there it stands – fully supported by a part insane parliament – BOLLOCKS..!

Item last – there is – thankfully – a Senate committee which examines delegated legislation. They are ploughing their weary way though the complex twaddle CASA produce – unchallenged. Can you even begin to understand the intoxicating power it grants to a Government Business Enterprise to not only write their own version of ‘the law’ have it unchallenged by parliament and the public money backing to beat all comers into a cocked hat? Really? Seriously? – Yep, all true; when you add a minister who could, if he tried, care less about an industry and the aerodromes it must have to survive – well then you see the beast our democratic parliament has fostered and nurtured. Is this a government responsibility to this nation – you betcha. So why then does government stick it’s purblind, fool head in the sand?

“The irony was not lost on any of us that despite the theme there was a robot on the throne.” ― Kathryn Davis, Duplex

Could someone, anyone; please tell me how a mutt like St. Commodious can get away with making statements like these – and getting away with it; Scot free. The list of Embuggerance cases is long, distressing and a bloody mark against a supposed democracy. A democratic nation which allowed a complete political pig, like Carmody to receive an award – for a completed rule set? Bullshit; in Spades, redoubled.

Aye well – steam off please GD. But, and I say this in all honesty – I look at other nation’s aviation industry – flourishing under sensible rules and an administrator compliant with ICAO principals and it makes me cranky. CASA is and will continue to be the world’s world’s worst example of a complete, expensive failed system for a government which has basically abrogated all responsibility for an essential industry. One only kept alive by the determination of those involved to survive – despite CASA and the likes of Carmody and his evil mates.

I look up – and even the horse is looking over to see why I’m beating up this long suffering keyboard. Mind you, it’s blowing twenty knots outdoors and raining pick-handles. The orchard is a dripping, sighing quagmire, I can barely see the houseboat from here. But, as always, there is a light in the kitchen window – steak and kidney pudding awaits. No takers for a last walk tonight; perhaps a last Ale and an illicit smoke before we toddle off, up the wooden hill to Bedfordshire. Big day tomorrow – my ‘Slash Pine’ practice jointer has to pass muster – if so, then the Beech may be made – under strict supervision (of course). Perhaps – we shall, no doubt, see.