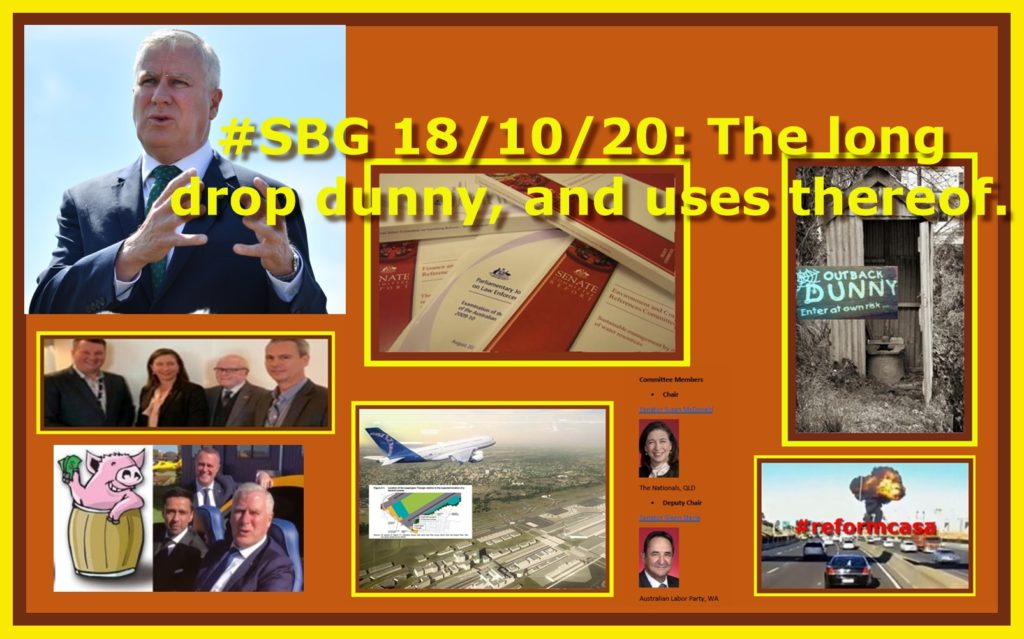 Or; for our more ‘sensitive’ reader – a ‘pit latrine’. In days of old a common item; done properly, as the Japanese managed; has proven to be of an advantage to the well being of the natural word. In these modern days, the flush and forget system is extremely effective etc. The point is that for millennia, humans have been working out ways to be shot of the unmentionable in many different ways. Perhaps its time we considered utilising that considerable ingenuity to be rid of all unwanted waste. We could sure use such a system about now – there’s so much to be ‘flushed’ away.

For instance – there you sit in your long drop outhouse and a bushfire breaks out; just as it becomes a little to warm for comfort – a Black Hawk chopper lobs in – to save you from being toast. Would you say “Oh no – I can’t fly in that – CASA say it’s ‘unsafe’. Take it to the ridiculous – Afghanistan and you are getting the unmentionable shot out you and Bell Jet Ranger turns up to rescue you – would you say “Oh no – I can’t fly in that – it ain’t military. Don’t even think about laughing. I’ve no idea what a ‘Black Hawk’ costs – non: but it will be ‘a plenty’. Our Defence Force want to gift two to our Rural Fire Service; remember – those boys and girls who did such a tremendous job during the horror story wild fires we had early this year. These two ‘free’ choppers would assist in getting men and machinery into ‘critical’ locations to prevent or contain fire spread. CASA, in it’s infinite, consummate wisdom have ‘deemed’ the use of these tried and battle tested assets “unsafe” – an unacceptable risk to ‘safety’. Cue ‘Flush noises’. 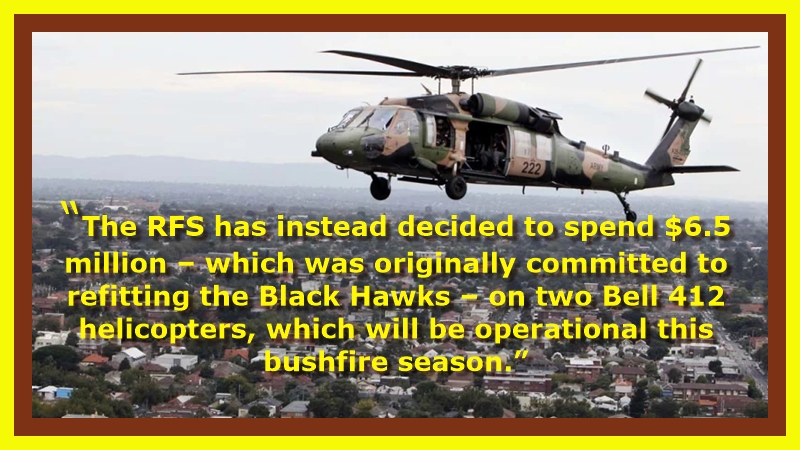 Of course, one great advantage of the country ‘outhouse’ is that it may always be found, even on the darkest night – just follow your nose. Once enjoyed, the unforgettable aroma is as good as a lit pathway to the educated olfactory senses. One whiff and the candle is no longer needed to find your way. Corruption (in the medical sense) is similar in that it also has an unforgettable odour;but what of the odour of political ‘corruption? That is a hard one to find; in civilised countries, one simply pays the honest Baksheesh and all is well; it may be indelicate to mention it, but once you ‘adopt and adapt’ to a honest system it becomes, after some quick calculation, cheaper and much more effective than the clandestine model, which must be hidden away – lest it scare the voters. Honest folk are denied access to the secret system; although they are obliged (read forced) to contribute through their taxes; like it or not, to little return on their hard earned. I’ve no quarrel with ‘honest’ Baksheesh – that is available to all who can stump up the geld. The blatant hypocrisy of the of the dishonest system however, sets my teeth on edge, particularly when its on public display. Then it seems to be that the only real crime is getting caught out and leaving the pitch better off than when you were on it – courtesy of tax payer dollars.

One essential element is required on any visit to a country outhouse – the ‘paper’ of choice. There’s always a lot of this stuff laying about – look in your office bin. At least two decades worth of useless paper, carefully worded, edited and printed – only to be a victim of the final edit and being ‘binned’ as the next iteration is redrafted. Miles of the stuff. I notice a distinct parsimony in the amount of wasted paper being sent along to the great vacuum of the Canberra Senate library – for consideration. Hard times now, perhaps every sheet of paper which may be usefully employed, to the same end with a much more satisfying result is being stock piled against future need. Face it; where is your paper best used: mouldering in the two year waiting list for a ‘look-at’ or, in the outhouse available (sans printing ink) for immediate use? 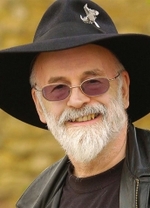 “[The clerk] held in front of him a scroll with a red wax seal affixed, the kind of thing believed to make a document official – or at least expensive and difficult to understand, which, in fact, amounts to the same thing.” ― Terry Pratchett, Snuff

Aye well; I had been playing with an ‘implosion’ notion – for it certainly a fact of future life – HITCH – stole my thunder and he’s welcome to it. CASA is imploding, the light weight industry is about to implode, flight training is on the cusp, dithering between implosion and explosion, either result spelling disaster. The sheer volume of ‘red-tape’ and tic-a-box impositions making it almost impossible to re qualify pilots, pay the dues on the aircraft, meet the costs of maintenance and government charges; this before a propeller is turned and a fare paying passenger load can be wrested from the ravenous competition. Add the cost of fuel, and the outrageous landing fees at rural aerodromes – if you can find one with fuel, maintenance and a serviceable surface to land on and you have a an industry on it’s knees unable to afford to operate, let alone trade up to newer, safer air-frames and engines. This dangerous situation has been crafted by CASA. Dangerous? Yes, watch it all go ‘underground’ as the struggle to survive becomes desperate. Now, don’t be all ‘Missy’ or despair, we still have McCormack 8W on side, out there batting for the sake of GA – don’t we?

Well; the whole thing stinks to the high heavens – worse than any country outhouse I’ve ever visited. I built one once, still standing even today, now used for storing firewood logs. Happy days, the Ute, the dogs, the tools and a week of the real Australian country hospitality – duckling marvellous. No doubt the world will be thrilled to know I got that floor down (lovely thing) all that remains now id to ‘trim up’ the treads and risers for the staircase and fit ’em to the stringers installed; hand rail etc. next. Ever considered a cat as a horse whisperer? I never did – donkeys are great at this – but the old Mog? Well, a young filly for some reason has been carrying on a fair bit. Beyond me; then the old cat ambled into the filly’s box – instant calm – instant rest and whatever ailed her is dissipating by the hour. Aye; Just when you think you’ve seen it all eh? Right then; retrieve boot, light cigar – whistle up; and, away. 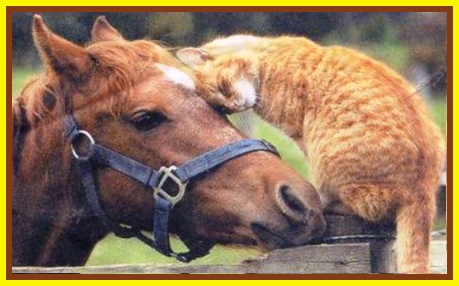