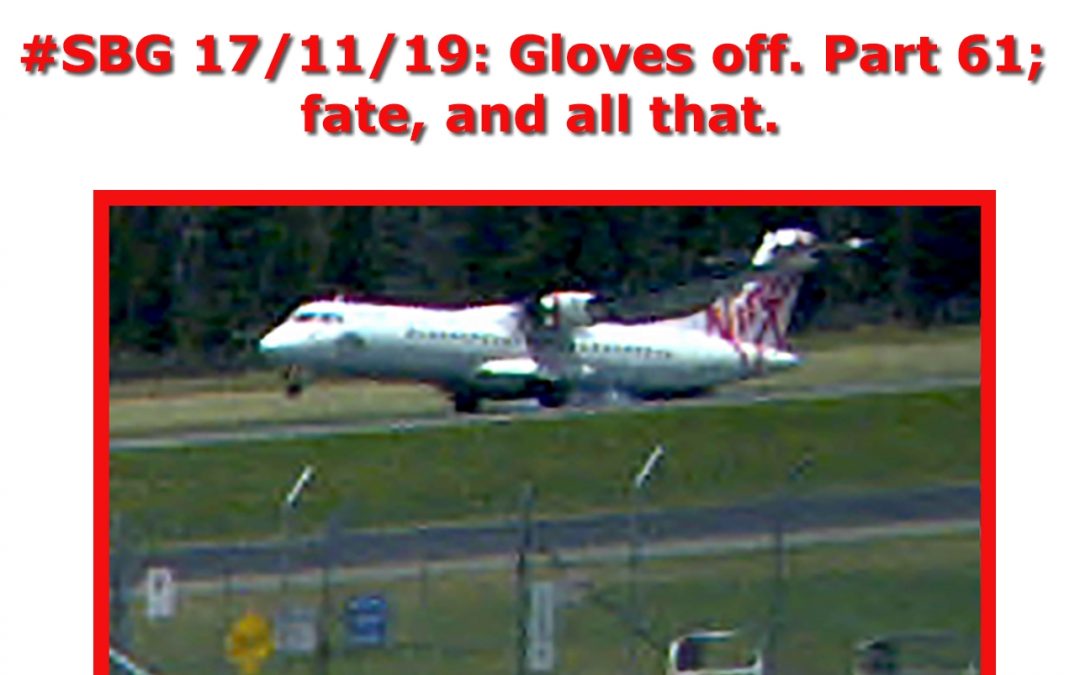 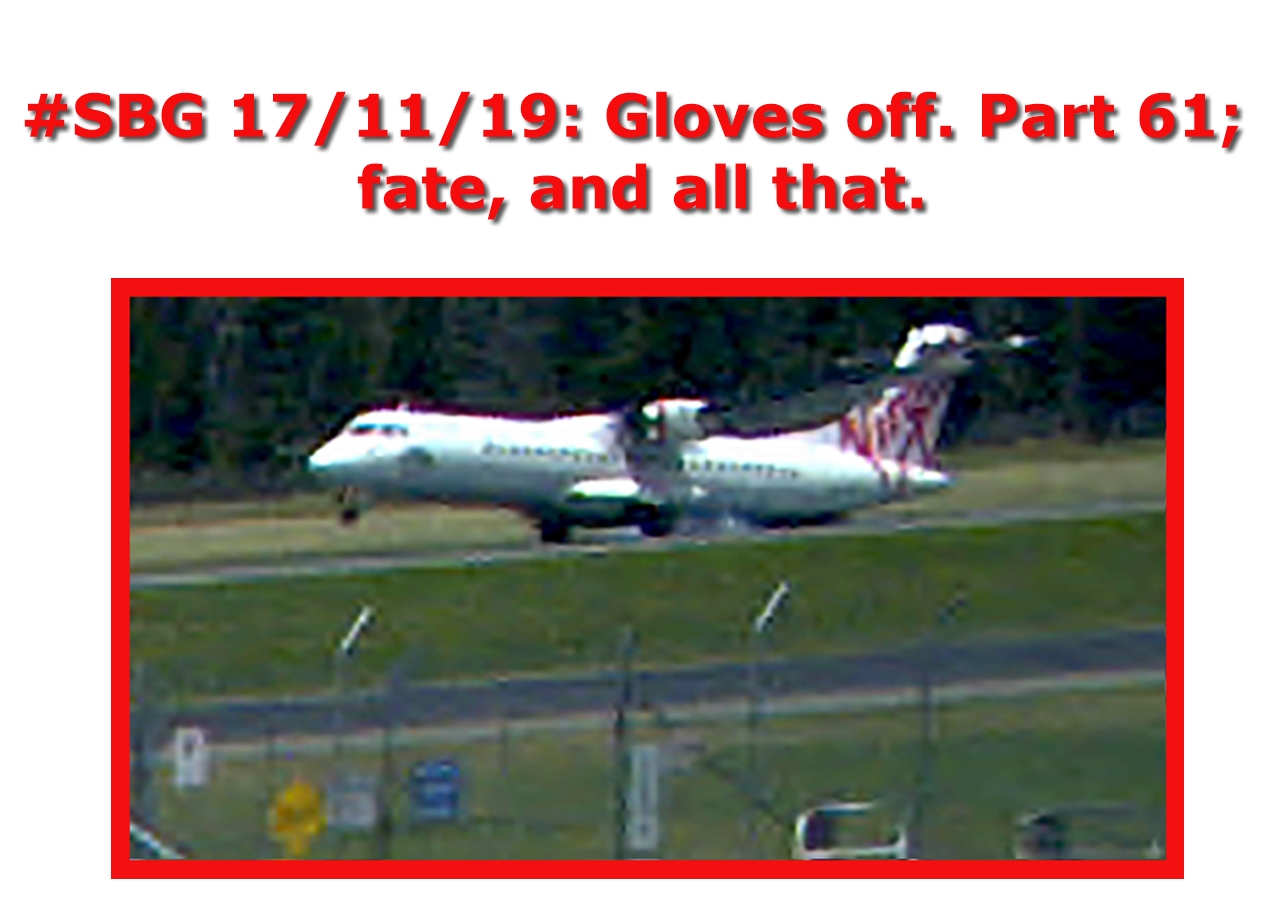 Ref: Its the Bullshit which baffles, bothers and bewilders.  & https://www.atsb.gov.au/publications/inv…-2017-111/

“A pilot may earn his full pay for that year in less than two minutes. At the time of incident he would gladly return the entire amount for the privilege of being elsewhere.” ― Ernest K. Gann, Fate Is the Hunter.

I was at the ‘full house’ BRB indaba (no option); alas. The wet dream of some first time ‘writers’ of operational standards have created a significant mess (read Buggers muddle): left it behind them; and, thankfully, wandered off to pastures new. Amen. I personally only attended one ‘professional development’ session. The named ‘idiot’ in charge, bounced about the place, full of puff and big words used ever so slightly ‘off centre’ telling us that this was a great opportunity to ‘learn’ – he’d even produced a manual. His name was Weeks – a short wheel base, rotund, grade two flying instructor, with bugger all multi engine time, let alone real life operational ‘experience’. The first mistake was to ask all attending (about 30 – can’t remember) to write down their total experience on a slip of paper. All complied. Then faced with something in excess of 240 thousand collective hours; a man with only a handful of very ‘soft’ unseasoned experience, began to tell ‘us’ how to be better. All his own work (he boasted)– were it not for the log book sticker, most would have departed the fix long before working through some of the greatest load of shite ever put down on paper and sold as ‘the way forward’. Then he was placed in command of Part 61. The rest, as they say, is history.

Now then; America, EASA, Indonesia, New Zealand, Malaysia, PNG, Vanuatu, UK and several other have a Part 61 equivalent (or similar). Not one of ‘em even comes close, just on a page count alone, to the Australian version. When you start to add up the pages in the Australian Part 141/ 142 flight schools manuals and regulation you have to wonder what 61/141/142 have produced – in the general way of ‘improvement’ over world best, adopted practice.

The answer is writ large; on a dozen aerodromes across this nation. Canberra, Sydney, Mildura, Moranbah, Newcastle, Dubbo, Bathust: want more – look ‘em up. It is a long list of potential disasters. How many more times are we going to get close to a serious disaster (lives) and hull loss?

I note the USA is doing something about it; the Kiwi’s are streets ahead and, as usual, talking good sense. But what of the Canberra crowd? Well, they’ve tried to blame VFR into IMC on Angel Flight; they’ve managed to prevent a seriously good training program, working within ‘their’ law from operating; they’ve approved some of the worlds worst, most verbose, useless, box ticking check and training systems. All neat and compliant with whatever the ‘experienced’ FOI fantasy and boss impressing twaddle deems proper. Stellar – and yet there is a string of very real ‘close calls’ in ‘transport’ aircraft, carrying passengers, all at risk, baying at the ‘safety’ gods back door. Can you possibly imagine the fall out had the final approach to a coal loader been completed. Lucky, the much maligned Williamstown controllers were ‘on the ball’ Eh? 12 mile short of the airfield, on short final? WTD? Who are these pilots? Who trained ‘em and how?

What with ATSB spin and faery tales, supported by a ‘Safety Authority’ which has no blind clue, yet hiring the likes of Weeks and his best mates – you have to wonder when it is all going to end. Sooner or later an error which should have been corrected at basic flight training is going to kill a whole load of people. Its not that the pilots can’t fly – they do what they can with the ‘tick-a-box’ training they’ve had. Trouble is……………

Yep. Your system minister, despite the whispering, is well buggered, beyond tolerance and operational belief. Only my opinion, but, when the time comes, as it must – I will ask you to explain why, despite senior industry warnings, you did SFA about it. Yes mate – You.

It is, unequivocally, a total shambles. ATSB poncing about at PR and dabbling in very suspect statistics; CASA locked into a legal minefield they have created; ASA going gods alone where trying to make more bonuses at the cost of sanity in support of a now antiquated ‘new’ system.

So far, on your watch – seven (7) close calls; and all you’ve managed to do is bugger up Angel Flight and totally wreck a honest, compliant toiler at the gates – Glen Buckley. Quite a track record. Now then, man up or piss off.

Correct – I’m cranky. Why? Seriously. You dare ask? Rex could hire half a dozen senior, experienced pilots tomorrow – Virgin could actually bring in some flying experience to their increasingly dangerous turbo-prop flight line. Rex training manuals? Well that’s another sad story (read one). But I wonder why CASA can overrule and undermine the use of seriously qualified pilots when matters aeronautical are heading down the old safety tube at a great rate. I do not wonder why aircraft are being broken all across this nation – I’ve read some of the check and training manuals produced – inspired by Weeks & Co: 61, 141, 142 and all whom made a living producing some of the worlds worst, mindless bullshit, based on zero experience of the way aviation works – in real life.

That’s it: no quotes, no jokes, no pictures. Just a straight, honest, experienced opinion. The BRB collective opinion is being kept against the day when sanity, in some form, returns to governmental management of aviation. A prayer to the pagan gods, sent on the dreaded, deadly 10 knot (aircraft breaking) breeze to prevent an oh so avoidable tragedy.

P7 just lobbed in; stack of paper under his arm. I have however a cunning plan forming as I sign off. Watch this for a diversion. “Ale with you Sir”. God’s willing, that will put a hat on it until tomorrow. They do say tomorrow never comes – we shall see.