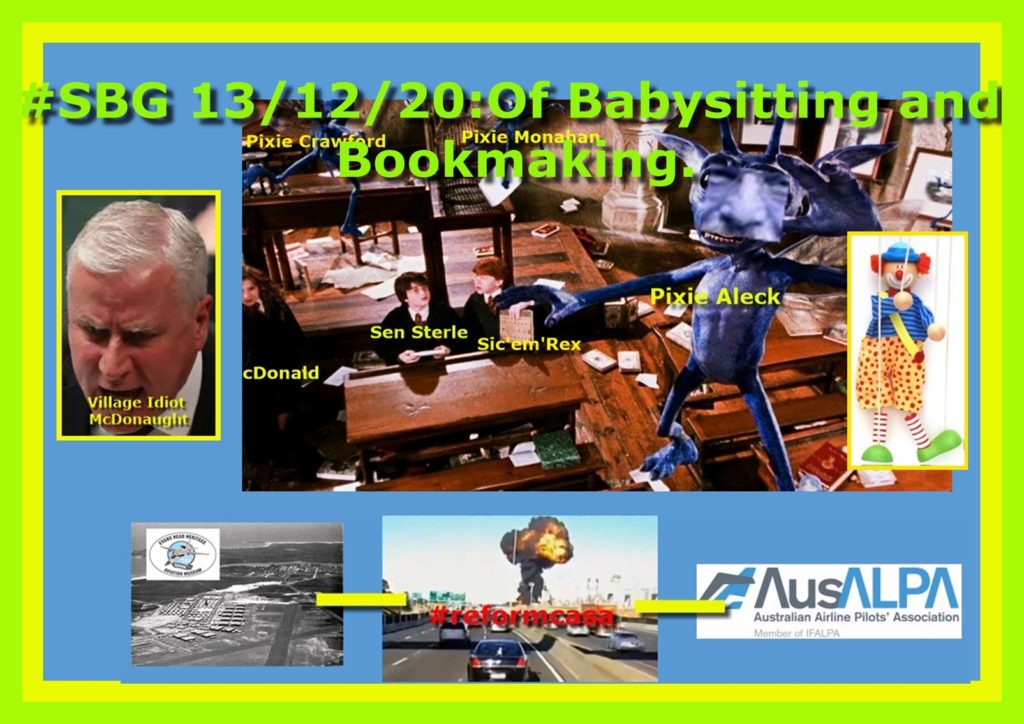 I expect many have been roped into ‘baby-sitting’ gigs from time to time; my turn came this week. Did the usual, loaded the dogs (mandatory for clandestine wrongdoing), picked up the Pizza’s and turned up on time. There is system and method in this tradition. Before I smuggle in the pizza, the dogs get to enjoy a ‘healthy’ meal (or else no Pizza) a movie is selected, grab some Pizza, sit where ever you like and ‘chill’ as the kids say. This time it was a ‘Harry Potter’. I’ve read the books but have avoided the movies – so for me it was a first. There I sat – mind pondering the odds for the BRB indaba, when the scene below played.

Howls of protest when I rewound to the beginning of the part; and, watched again. I couldn’t stop laughing. The parallels were both sublime and ridiculous. Substitute McCormack for the smug, conceited, basically useless teacher; no skill, no idea what  he’s about, no hope of control, releasing all the ‘Cornish Pixies; aka the chaos within aviation. Substitute for the ‘Pixies’ the CASA crew being released, uncontrolled and reeking havoc; and, then picture one small, clever girl (McDonald) who casts a charm and stops ’em – dead; in mid flight. Irresistible. Here endeth the whimsy.

“The Owl and the Pussy-cat went to sea
In a beautiful pea-green boat,
They took some honey, and plenty of money,
Wrapped up in a five-pound note – by Edward Lear.

But there’s some serious  ‘interest’ in the notion that this what McDonald has actually done. Not by herself, not alone; but very ably assisted and supported. The big bets are the SSCRO have been paying attention to the legal nightmare, the DoIT are very carefully examining the legal, constitutional liability and responsibility for the complete lack of control anyone has over CASA and ATSB, the ICAO compliance farce and difficulty in ‘trade’ being established through sensible, compliant regulation and policy making. There are even some takers for the PM&C being in the running – there is potential for very real political embarrassment, should the genie ever get out of the bottle. (Unlikely – 33/1). 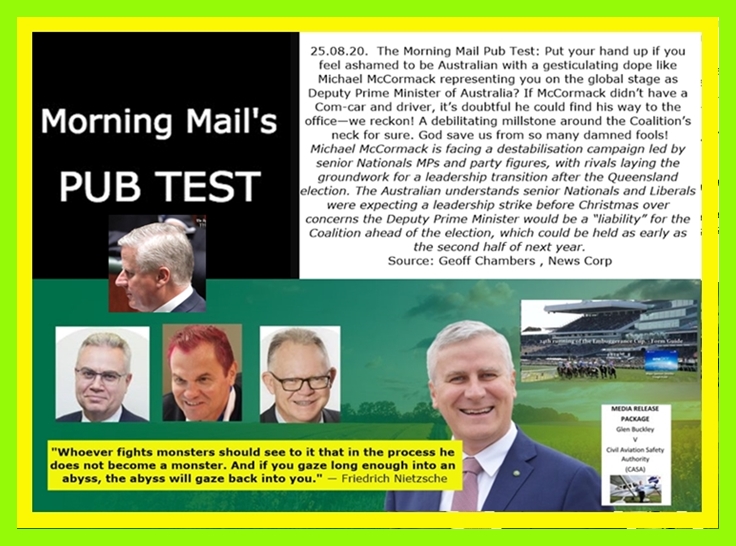 “For years, he filled a notebook with beautiful lies and impossible hopes. When he found a genie, he simply said, “I wish it was all true.” ― T.R. Darling

Some are vexed by the brief hiatus of Christmas and that there was not an interim report; well, technically there was; just not what was expected. This report is going to be, at best, an each way betting option. If and it’s a bloody big IF the inquiry is another ‘wet lettuce leaf’ parlour speakeasy, then a non report would have been published. But, and it’s a ‘but’ of equal size, if there are some ‘heavy-duty’ hats in the race, then I’ll be offering very short odds on ‘Major Change’. Much depends on one, perhaps two game changers. The new DAS – being one; St Commodious is still parked on the circular office, still able to lash out, bully and intimidate – many will saving their bet until that little wrinkle has been ironed out; and on who is left standing. If Jonathan (where are my marbles) Aleck, the CIA spook and that truly dreadful Scots fellah are within a city block of the Ivory tower then the betting on significant change becomes nugatory. Unless the new DAS is a new broom; or, the true magic is being done behind ‘the veil’ before the new boss turns up – well once gain, the tote odds shift. 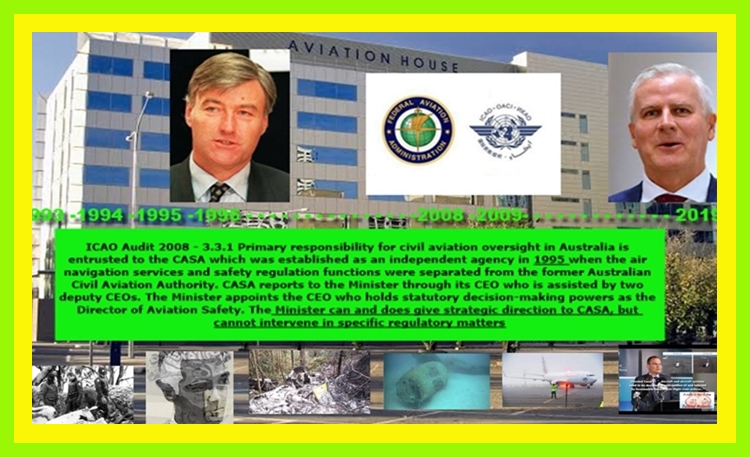 There is one current matter outstanding which must be addressed; with or without ‘reform’ being made real and evident. P2 – HERE – has provided a CASA list of those who are actually members of the Aviation Safety Advisory Panel (ASAP). It is of interest to note who is not on that panel. There are links to submissions 44 (AFAP) and 28 (AIPA) which are worthy of serious consideration – for reasons which must be clear to even a thick-head like McCormack. 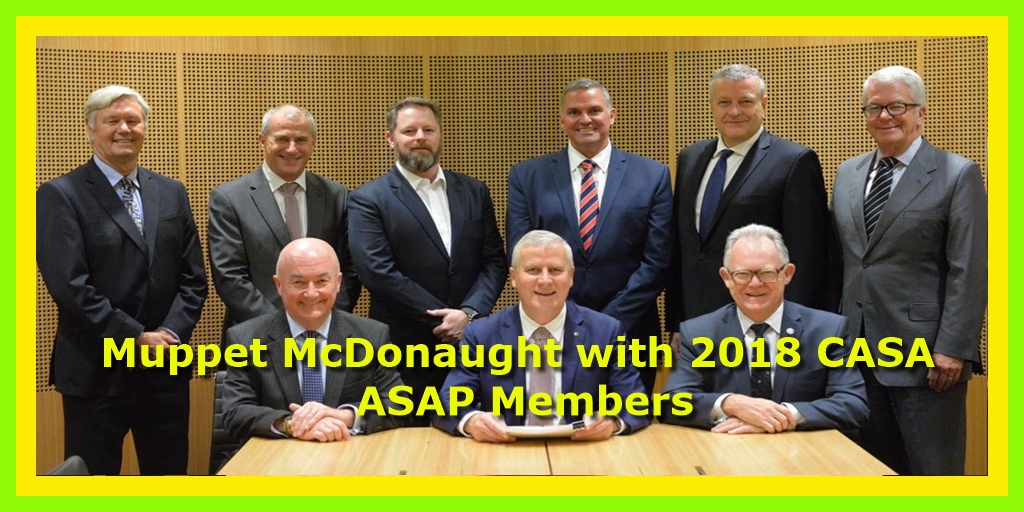 The inclusion of both AFAP and AIPA in the ASAP would be clear harbinger of real change and of hope for a better system. Of course St. Commodious wouldn’t have ’em. Why would he want intelligent, professional, representative bodies when he can have RAOz and drone wizards setting out changes for serious commercial aviation? Rectification of this outrageous insult could/should set the tone for the incoming DAS tenure. – We shall see. Anyway – No interim report – no tote odds. Just have wait and see what Santa brings – gods help me this country moves so slowly; land of the long weekend – but don’t get me started. We’ll be here at it all night. 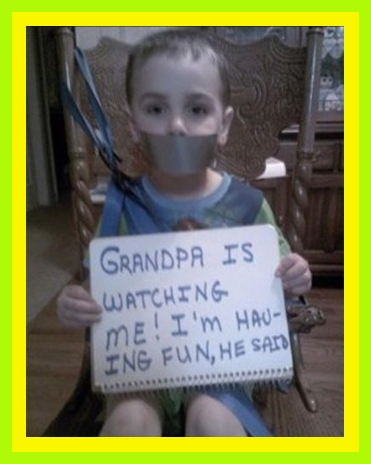 Aye well, ’tis now Sunday; the young ones all tucked up and growing up as they sleep; best I dispose of the evidence lest I end up deep in domestic tyranny (again). There is a well constructed plan for a small ‘sewing’ box in my shirt pocket, interesting concept and devilish tricky to make; I have a small amount of some very, very lovely, very old Rosewood (the real one) – can I finish it in time for Christmas? No matter, just made it out with the empty pizza boxes – lights in the driveway – dogs need no urging to get in, so, its’ time to wend my weary way home. 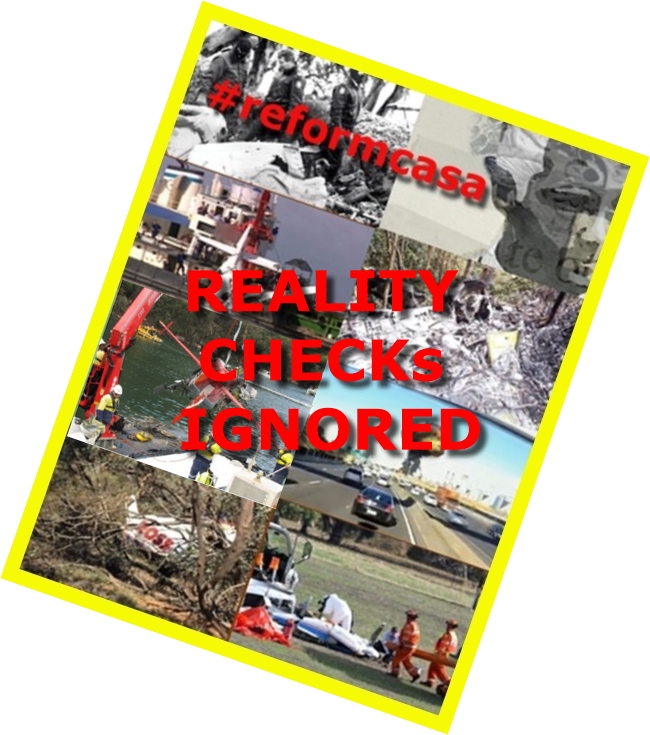