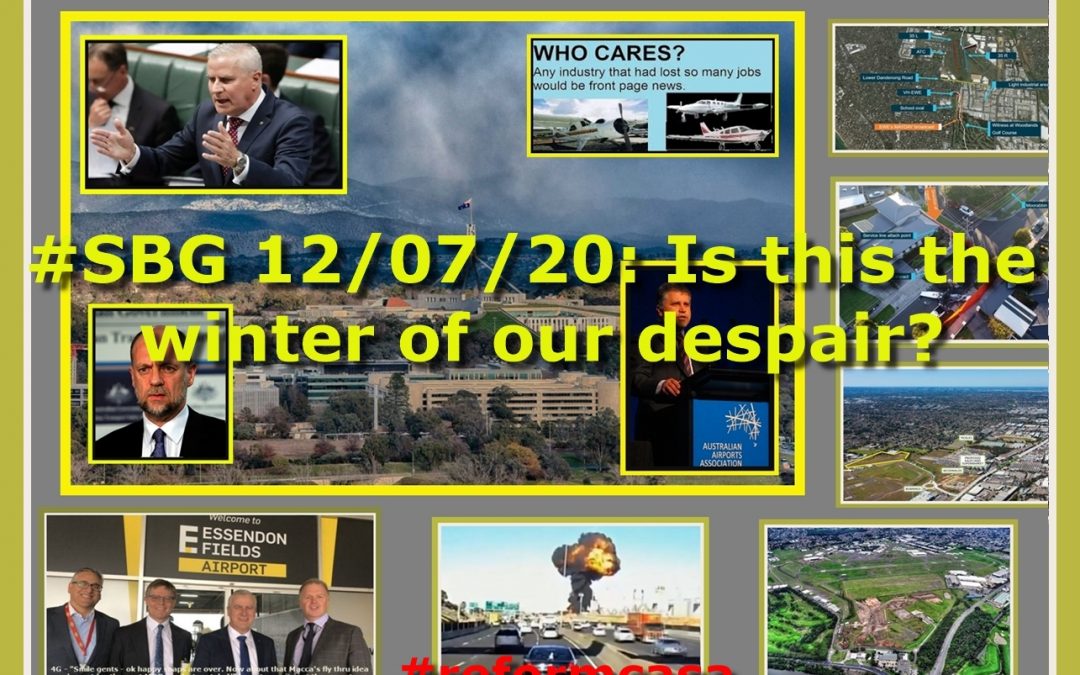 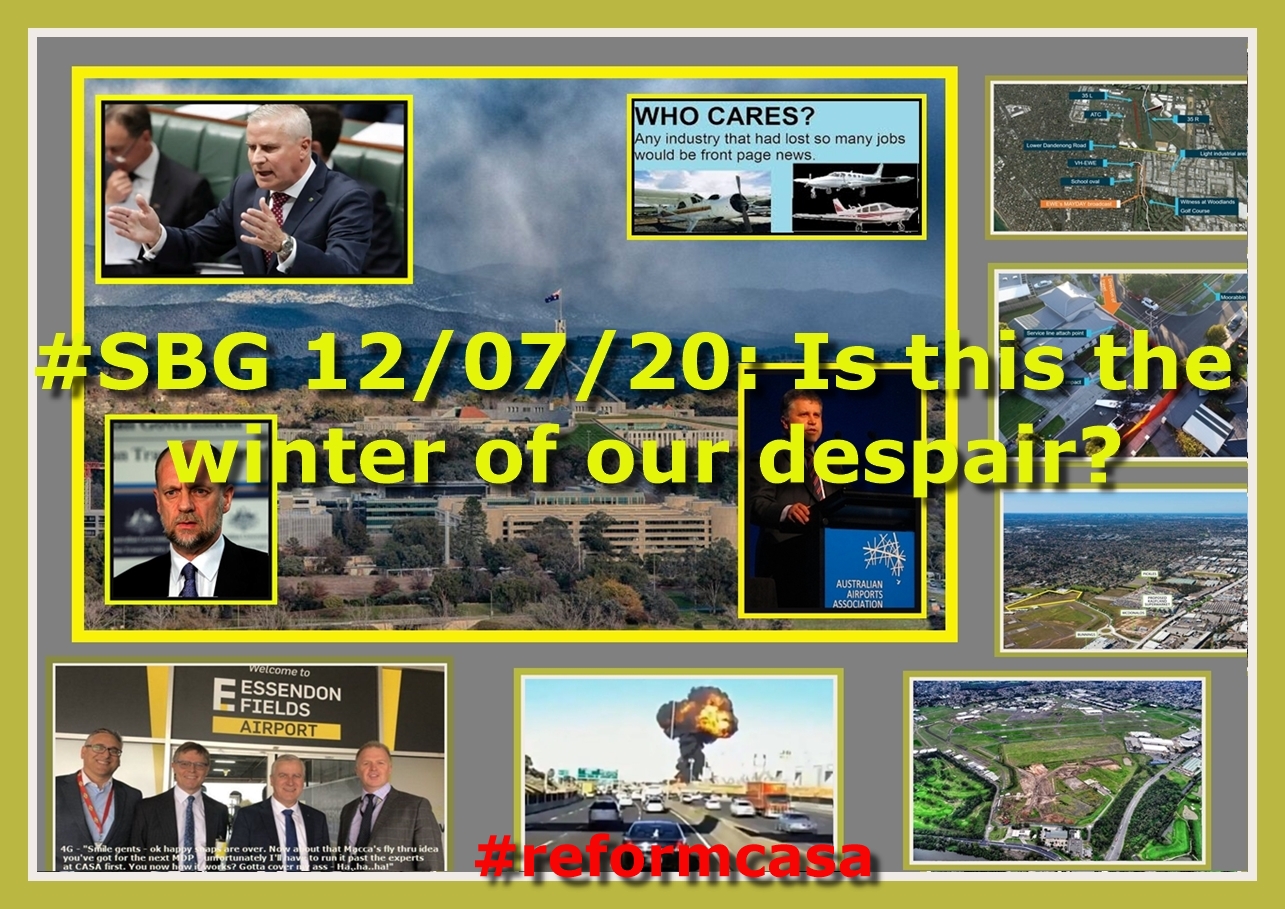 Is this the winter of our despair? – AP Forum version. 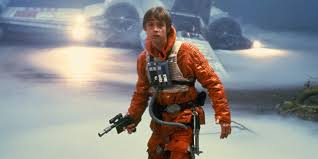 Dickens sums up pretty well the state aviation finds itself in – and, presents many choices of perspective. Australia aviation was already struggling to make ends meet, long before the pandemic came to visit. While it can never be described as a ‘good thing’ for the nation; it is IMO, a heaven sent opportunity to sort out the bloody regulatory mess industry is swamped in.

“When one door closes another door opens; but we so often look so long and so regretfully upon the closed door, that we do not see the ones which open for us.”― Alexander Graham Bell

Here we stand, looking ‘regretfully’ at the door so rudely slammed in our faces. Do not look back – you ain’t going that way. Look a little way ahead and see the golden opportunity to bring in swift reform. While almost every ‘expert’ in town is sitting about, twiddling their thumbs, wondering what’s to become of it all – take advantage of that idleness and put ’em to work. Now, while industry is ‘static’ is the time to bring in the reforms; adopt the FAA or NZ rule set; change the Act to lay responsibility fairly and evenly across the spectrum; decriminalise the regulations, bring them back to a sane, constitutional footing. There are many things which could be done – now – now – to ensure that when the crisis is over; industry has every possible chance the government can provide to get it going again, stronger, more efficient, not overshadowed by onerous penalty and tortured rule sets. Reduce the oversight budget; relieve some of the fees and levies which supply incredible sums doled to individuals and organisations, in the vain hope of ministerial protection. Put any bipart insane politician in the stocks. 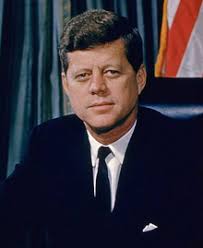 “The Chinese use two brush strokes to write the word ‘crisis.’ One brush stroke stands for danger; the other for opportunity. In a crisis, be aware of the danger–but recognise the opportunity.” ― John F. Kennedy

Aviation has always been ‘self motivated’ and usually self funded. Many big businesses began as small ones; one or two folk get together, see an opportunity and risk all to make it happen. Not all succeed, but many do. Aviation is of that entrepreneurial, independent spirit which made aviation (and this nation) what it is (or was) today. Government should not allow it to be still born or strangled by red tape at birth. Getting rid of bureaucrats trying to run an industry with which they have no earthly connection or empathy is a good start. Getting shut of ‘shamatuer’ experts and ‘mates’ and finding some legal marbles would be of great assistance. That’s just CASA – ASA and ATSB are in a worse state. – MTF.

The pandemic has, believe it or not, created an opportunity for government to shine; provide the leadership necessary and pave the way for a better more vibrant industry. There will never be another time like this one to make it happen; while almost every aircraft is on the ground and there is time available to ring in the changes – before it becomes too busy to make the ‘big’ changes so desperately required.

“It still holds true that man is most uniquely human when he turns obstacles into opportunities.” ― Eric Hoffer

While I’m at it; it’s only fair to give the world’s ‘tin-kickers’ (accident investigators) fair warning. It beggars the traditional belief that AI were all qualified, honest, fearless, hard working seekers of truth. Pursuing the radical causes of fatal accidents and providing considered, weighted advice to prevent recurrence of same. How can a close knit body of experts sit in silence while the Australian brotherhood is muzzled, providing disgraceful reports and demurring to amateur (unpublished) ‘investigations’ being provided, simply to soothe political anxiety. Shame, shame; on the ‘tin-kicker’ tribe. “Elevated CO levels” BOLLOCKS.

Aye well; I doubt my twiddles will make the slightest differ; but, as they say in the classics – “better out than in”.

Item next – St Commode (Hitch bless him) to depart the fix. Good. We must all hope the door don’t hit the runt of the Carmody litter in the arse on his way out to a ‘fortunate, if flatulent life’. Was there ever a better time to chop out the deadwood, the inutile, the unqualified, and those who’s marbles have been scattered, far and wide these many painful years of tortured pathways to legal nirvana? Seriously, if a person has never , for example, say run a flying operation how can they advise those who do? How can they presume to be all things? Best stop there, before I seriously get cranky and let rip. 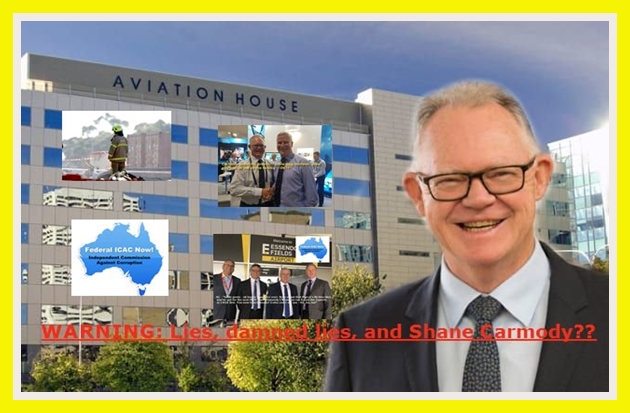 There is long, long list of insult to address before we even get down in the weeds of individual company cases; let alone individual embuggerance. The right time to fix the broken machine is NOW – before we all have to get busy and revitalise this ailing industry. Starting with the lack of aerodromes from which to operate – it is a little difficult to service a town or even a city which has a tower block or a DFO built on what was a national asset. Dough-for – Land (Dolan) and his best mate Murky Doings have much to answer for. Why doesn’t someone ask the right questions and examine bank accounts? Trusts – owning aerodromes? Ain’t that illegal?

Been a ‘fun’ day though. Gave my ‘apprentice’ a taste of the real thing – I’d found some dirty, damp, part painted old Pine boards – but they were wide and long. Bowed, cupped, twisted and filthy. 14” wide, ¾ thick and 6′ 6” long (in old money). Today we shall ‘fix ’em up’ and make a lovely workshop box. Not an ordinary box though. This one has a drawer beneath a lidded box. Complex joinery, but before that – the timber must be set to rights. Every bench plane I posses was used; scrub plane to clean off the mess; hog plane to get down to the ‘wick’ wood, Jack plane to level and straighten, smoother to bring out the peerless feature and figure beneath the grime and neglect. It took six hours to reclaim enough of the wood, make it ‘4 square’ – size it and set it aside to ‘dry’. I mention it only to demonstrate that no matter how bad the surface appears, how bent and buckled – there is always a ‘core’ which remains usable. The smile of my young apprentice at the end of the day made it all worth while – a neat stack of lovely old wood, ready for use – and very nearly all her own work. She will sleep well this night.

Aye well; “come dogs – lets away”. The orchard gate beckons us, perhaps tonight we may discover who ‘Pook’ was as we ramble. Almost everyone knows who Puck was and what he did – and he did it all on ‘Pook’s Hill’. But; who the Hell was Pook.? I ask you? It has held me intrigued – since age 7. 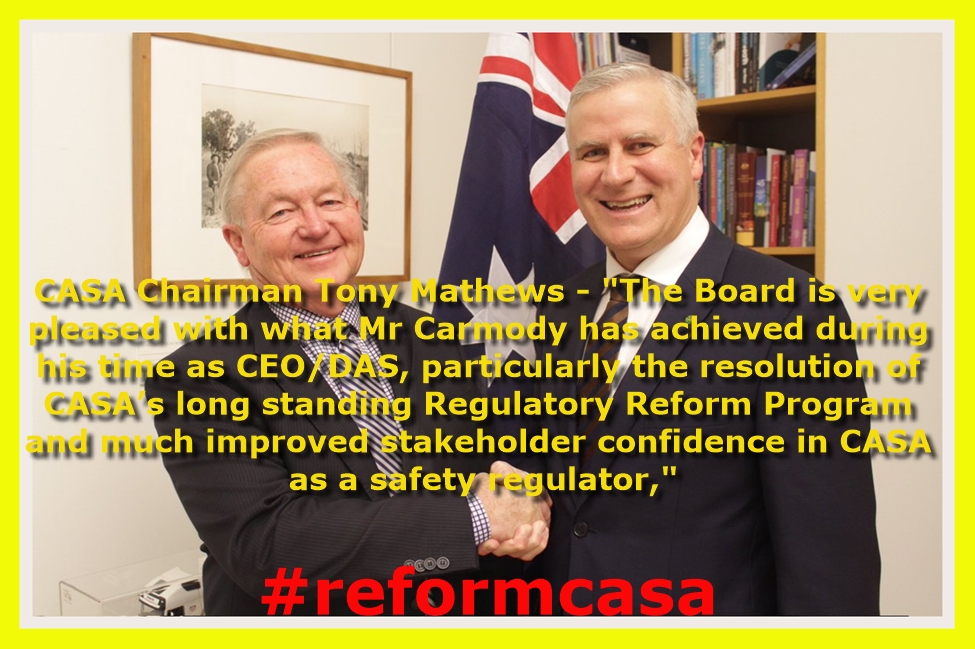