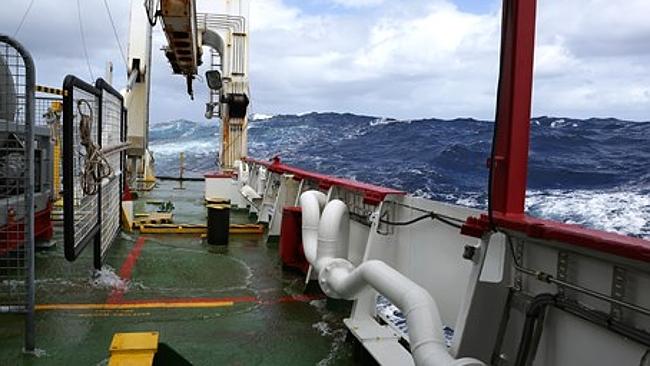 P9 quote: “Amongst the screaming, shouting, chest beating, hair pulling and bitch slapping; the calm, measured, professional voices of common sense and logic can be clearly heard.  Paul Howard’s amongst them.   Bravo that man.”

{Comment: To Brigitte Lanteri TY for bringing this to my attention…

From the MMSM this afternoon (approximately 14:45 Oz EST) and just recently updated – New MH370 theory impossible, say Australian searchers – the self-called “volunteer investigator” & publicly recognised shyster has just received a slap-down from none other than the ATSB…

We also get a re-hash of the bearded Beaker’s leaked super sleuth appraisal ( to Irish Independent) of the Tripartite meeting and what it all means for the search for MH370 in the SIO:

AUSTRALIAN co-ordinators of the MH370 search insist there is no way the aircraft is in the Bay of Bengal as claimed by “volunteer investigator” Andre Milne.

The self-described aviation technology expert is seeking donations to help fund a $2.5 million search of the area between Malaysia and India which he believes is the Boeing 777’s final resting place. Search theory … Andre Milne has appealed for donations to mount a $2.5 million search for MH370 in the Bay of Bengal. Picture: asove.net Source: Supplied

He claims satellite data shows an object similar to MH370 resting in the northern part of the Bay of Bengal, and has made a video appeal for funding in order to conduct a search.
The Australian Transport Safety Bureau has stopped short of recommending against public donations to Mr Milne, but officials insist MH370 is not where he claims.

An ATSB spokesman said theories suggesting the aircraft was located to the north or significantly west of Sumatra “were not supported by known facts or careful analysis”.
“It is for this reason the aircraft cannot be in Kazakhstan, Diego Garcia, the Maldives or indeed the Bay of Bengal,” said the spokesman.

Last week ATSB Commissioner Martin Dolan outlined in detail the reasons for the search in the Southern Indian Ocean, which is now into its seventh month. He said the fact no trace of the aircraft had been found did not mean it was not there.
“In most cases of aircraft impacting the ocean, there hasn’t been much floating wreckage,” said Mr Dolan.

“Air France 447 was a bit of an exception there.

“The likelihood of there being a lot of floating wreckage isn’t high, and some of the possible floating wreckage would have become waterlogged by now, and the rest of it is likely to be mixed up with a whole lot of other stuff in one of those big gyres in the middle of the Indian Ocean.” Empty seabed … the search for MH370 in the Southern Indian Ocean is yet to find any trace of the aircraft. Picture: ATSB Source: Supplied

Mr Dolan said the satellite handshakes that had led searchers to the Southern Indian Ocean were the most “solid piece of information” they had to work with.
“We keep on running the ruler over that (and) we’ve done various things to verify it,” he said.

Almost 14 months have passed since MH370 disappeared on a flight from Kuala Lumpur to Beijing with 239 people on board, including six Australians.

Now a couple of observations on these quoted bits:

“..An ATSB spokesman said theories suggesting the aircraft was located to the north or significantly west of Sumatra “were not supported by known facts or careful analysis”.

“It is for this reason the aircraft cannot be in Kazakhstan, Diego Garcia, the Maldives or indeed the Bay of Bengal,” said the spokesman…”

Does this mean any other theories from those above are still open to consideration by the ATSB?..& why isn’t Beaker fronting the media for this statement??

Strangely the MMSM then jumps to a re-hash of Beaker’s interview to the Irish Independent at stupid o’clock in the morning (someone’s time) err..why?? Hmm..maybe they needed a bit of a gap filler, not much of a story otherwise??

Going back to the Brock McEwan posts on Ben’s blog – I noticed that unfortunately the posts that followed diverged into a bit of slanging match between Brock & Confirmed Sceptic. However I wanted to quote from CS’s post #49 to help highlight a point…

“…The ATSB may have fallen into the trap of asking the kind of plod that seem to bubble to the top as experts. That’s assuming that they asked a real 777 pilot…”

That to me seems to be the strange disconnect with all this, the so called experts being referred to by the ATSB appear to be faceless men & women – why?? Who are they and what practical and/or operational experience do they have?? Do they have the bona fides of PAIN’s very own #P777?? Or in the ATC world that of a Paul Howard, who I see has put out yet another excellent, common sense look at the bollocks revolving around the presumed starting point for MH370’s turn towards the SIO – A unifying theory. MH370 – that even a layman could manage to get their head around…

Occam’s razor is a good method of problem solving until human factors muddy the waters. They’ve always been at the back of my mind but I’ve tried not to let them interfere with what I thought was a matter of factual problem solving.

The problem from the beginning has been the inconsistent information from Malaysia and by looking at what I consider to be realistic human factors, can now see what might have happened. Prepare to be bored because I don’t have a sexy conspiracy theory involving gold, remote hijacking or naughty Russian involvement. {Pure gold Paul, excellent stuff..

Paul even seems to have captured some of the Heff’s colourful language in trying to review the bollocks that the Malaysians are expecting us to swallow..

I’ve been swinging between cover-up and cock-up and have now decided that it’s both. Malaysian military have been trying to cover their initial ineptitude by making subsequent claims in a state of panic. I suspect their radar was inadequately analyzed, known traffic not eliminated and a false trace led us up the Malacca Straits. Rivalry and blame between civil and military could easily have prevented the co-operation required for exchange of information.

For Paul’s efforts to sort the wheat from the chaff or the facts from the bollocks, I think a coupla choccy frogs are in order….