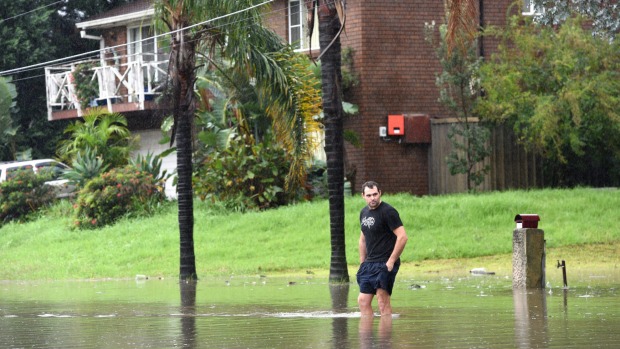 My post off the Aunty Pru Forum – Of Ministers and Minions. Thread – Two more for the minuscule pot.

kharon Wrote:  Here’s a question for Bill Heffernan – there is an ugly rumour on the wind that an attempt was made to ‘persuade’ him to withdraw his objections to the development of YSBK, get on board and assist expedite the project in return for a packet of sweeties and a night with someone’s sister.  I would hope that rumour is scurrilous, malicious gossip for it brings no credit to any. But now that the highly suspect (they have acknowledged asbestos) ‘fill’ from the airport is floating down the Georges river, across the golf course, carried onto flooded properties and spread over countless vehicles, to be washed off on Sunday; you have to wonder; will Bill now call for a Senate inquiry into the pillage of airport land, moody developments and those who are determined to do it? He could start with Be-a-cur and his mate Merdek up first, to answer some fairly direct questions. What a top story for Four Corners; mind you the MSM don’t seem to care a duck, not even a two headed one that glows in the dark and barks. Toot toot.

From SMH a short while ago:

Hundreds of residents in Sydney’s south west were ordered to evacuate their homes on Wednesday night as the Georges River burst its banks, after heavy rainfall caused dozens of floods across Sydney. The SES said it conducted about 35 separate flood rescues across Sydney on Wednesday. Davey Robinson Drive resident Nathan Arnold was trying to move move things out his flooded garage on Wednesday afternoon. Photo: Steven Siewert About 200 homes around Milperra were evacuated due to forecast flooding of the Georges River. The swelling river was expected to peak at 2.85 metres at about 6pm. Though the flood was classified as minor by the Bureau of Meteorology, an SES spokesman said the organisation predicted all homes were at risk of being inundated. Among those preparing for rising waters was Chipping Norton resident Nathan Arnold, who like many others in the area, said he had no intention of evacuating. Residents in parts of south west Sydney have been urged to evacuate immediately as flood waters continue to rise Photo: Steven Siewert As well as the motorcycle and expensive power tools, Mr Arnold had to worry about an anxious alpaca and stubborn sheep. The asphalt of Davy Robinson Drive was hidden beneath a current of knee-deep water, which had seeped into the garages of homes and was predicted to keep rising into the evening. In preparation, Mr Arnold was moving his belongings upstairs and finding higher ground for his uncooperative pets. At 4.50pm, the Bureau of Meteorology issued a minor flood warning for the Georges River. Photo: Steven Siewert “If we need to we’ve got the boat. We can start the motor up and float out of here,” an upbeat Mr Arnold said. Around south-west Sydney several major roads were impassable due to the river flooding. Cars were left abandoned in rising water, debris was strewn on roads and the river was flowing fast.  Shops and businesses were closing shop and sending employees home early as the flood waters cut off access. Parts of Newbridge Road were closed due to floods for most of Wednesday. Photo: Steven Siewert While volunteers were door-knocking in the area and advising people to leave their properties, many seemed unconcerned. Several residents said they had experienced flooding in the past and many of the houses along the river are built on stilts or raised above the ground. Flood risk for the Georges River at Liverpool was downgraded late on Wednesday, after reaching a peak of three metres, about half-a-metre less than authorities had expected it to reach. The bureau has also issued flood warnings for Hawkesbury and Nepean Rivers, Wyong River, Tuggerah Lake, Lake Macquarie, Paterson River and Williams River. Click for more photos NSW storm photos continue to reveal toll of wild weather Sydney, Newcastle and Wollongong continue to be battered by the storms that hit the NSW coast. Photo: Darren Pateman

Flood waters were highest at the Colo River at Colo. They had reached a peak of 9.3 metres on Wednesday night and were expected to rise further. No part of the city was spared from pockets of flooding in Wednesday’s heavy rain. The highest 24-hour rainfall totals recorded in the city were in the north-west and south, where totals of about 130 millimetres were recorded around Hornsby and Engadine. Dressing rooms at Endeavour Stadium, the home ground of the Cronulla Sharks rugby league team, were flooded with knee-high water. Water rose above car tyres in Crown Street in Surry Hills in the centre of Sydney at about 7am on Wednesday. At the same time, water had already risen through train stations in the inner-west at Lewisham and Marrickville. Waters rose as high as the platform at the train station at Bardwell Park in Sydney’s south. The flooded station caused major delays on the Airport Line throughout the day. It is the second time in the past year the station has been flooded

CHAIR: It is registered in the state of New South Wales as a Commonwealth folio.

Mr Wilson : Which means that it comes under Commonwealth law.

CHAIR: Clause 30 of the lease over this land says that the lease is governed by and construed in accordance with the laws of New South Wales. Refer yourself to clause 30.

Mr Wilson : Senator, I do not have the lease with me.

Senator BACK: Again, are we going anywhere with this? Is the officer going to get a chance to answer, or are we taking it on notice?

CHAIR: He is answering.

Senator BACK: No. he is not. You are not giving him a chance to.

Mr Wilson : Without seeing the clause, Senator, and the context in which the clause is written, I cannot answer.

CHAIR: Well, I will just go a bit further if you cannot answer. I will just give you a few other tips. The certifier of this process was a private certifier?

Mr Wilson : He is our building controller.

CHAIR: A private certifier cannot approve the destruction of a flood plain, only the relevant council.

Mr Wilson : Senator, in accordance with this—

CHAIR: In this case it is Bankstown City Council.

Mr Mrdak : What we might do, Senator, is, if you could set out the issues, then we will answer what we can tonight or take them on notice and give you detailed answers. So, if you could give to us your questions or assertions.

CHAIR: As you know, the destruction of this flood plain is going to have an affect on the residential people in the area in the event of a flood incident. It is going to have a serious impact on the people who have had nothing to do with this dodgy deal, but who happen to live adjacent. The flood plain has been filled and the flood has to go somewhere. The council knows about it and the guys that did it knew about it as they were doing it. To add to that the fill, which was the cheapest that they could find, is full of contaminated material, which allegedly was supposed to be supervised under the environment approval process. I rest my case. You have a problem, boys.

Mr Mrdak : Senator, with those matters, we will take them up and come back to you with a detailed response.

Or if you prefer…

And for those arrogant & ignorant Commonwealth public service Mandarins on display in that Senate Estimates video footage, here is a link for a very informative 2001 paper (courtesy Wentworth Shire Council) that clearly outlines the history of flooding on the Georges river, titled – HAVE WE FORGOTTEN ABOUT FLOODING ON THE GEORGES RIVER?

I suggest Willo and Murky start reading up, cause I fear there will be many questions coming their way very shortly from one extremely fired up & cranky Senator Heff…

As an aside & on the subject of McBank(s), I noticed that one of the big four maybe looking down the barrel of contempt of the Senate (see here )…hmm why does that sound so familiar…

Uh oh, did somebody mention PFC? Brisbane airport are/have been looking at the PFC issue in the past 12 months. Also some of Cairns airports future development, in line with it’s approved master plan, may hit some snags due to the PFC issue and my source tells me that they have already met with ASA. Also, it gets better – currently there is no quantifiable data or specific measure that you can weight PFC contamination against, but I did day ‘yet’. However a contact in government informs me that this will change in the not so distant future because PFC is definitely an environmental/human issue. In fact it is rumoured that Airservices are aware that this shitfight is coming and has squirrelled away around $350 million in preparation for compensation. After all, can you imagine the superannuation funds and the JP Morgans being told “sorry, you can’t put all those shops and/or DFO’s on that juicy airport land that you bought because it is highly contaminated with PFC’s, sorry”!

Furthermore I have heard that the likely compensation cost may run into billions around the network. Can you imagine telling the Government that there precious ASA may have to kick the can for billions in compensation? Kind of makes one think that allowing airport generating money machines like Sydney to operate and not have to deliver a single cent of revenue into the public coffers is somewhat RIDICULOUS!! So another question that one could throw out there just for ‘shits and giggles’, is this; What does Mr Meredek no about this potential issue??

Peetwo, what so you think mate, is there MTF? Give me a hell yes!

“Unsafe glowing airport land for all”