It is often said, a picture is worth a thousand words. 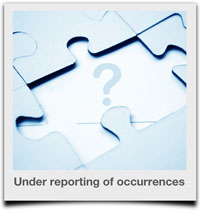 Ironic ain’t it; where a missing piece of the ATSB jigsaw used to promote the ATSB ‘safety’ system, when the ATSB have hidden the piece away to prevent a true picture emerging.  Won’t bore you to death with the tedious research, blind alleys and dead ends P2 and I have been down, looking for the missing piece.  Actually it’s more than one piece, you will note that the piece shown is from the middle ,of a picture; the additional missing pieces are ‘corner’ pieces on which the frame is built.

Just focussing on Melbourne for a while; it is nearly impossible to accurately define ‘how many’ incidents (not quite accidents) have occurred with similar, ATSB defined, contributory factors.  But, if you take each of the mentioned factors and create a matrix with the major headings there are common threads binding the incidents. Take loss of situational awareness, then start adding up the number of incidents where this has been a factor.  It very quickly becomes a significant number; to refine the construct there needs to be a ‘study’ or discussion paper defining ‘why’ there is an increase in events where situational awareness has been significant.  Use the Rex v Coal Loading dock as a benchmark; the ATSB wrote it off to ‘illness’, dim light and other equally frivolous reasons.

FCOL – a Saab would have landed on the dock, with both aircrew chanting the pre landing checks; the gear was down and the aircraft configured for landing – 8 mile south of a bloody great big airfield, with all the toys and; thankfully, an alert crew in the control tower.  Loss of SA ? Certainly.  But was that all? No sir, it bloody well was not all.

I’ll stop here, you can see where this is heading, there are at least 20 details which have not been examined let alone considered.  We could, between us probably draft a first class analysis and strip the incident right back to bare bones.  Hell we could probably even dream up some recommendations which would assist with rectification.  Could we make them stick – no way.  Just a bunch of tendentious bloggers, to be ignored with impunity by that master of air accident investigators.

Handing over P2 – your call, it’s an interesting study but to complete it through to conclusion will take many, many long, unpaid hours to get there, with no hope of changing anything.  Forsyth had no luck, the Senators had even less.

Is the game worth the candle?