How much can a Koala bear? 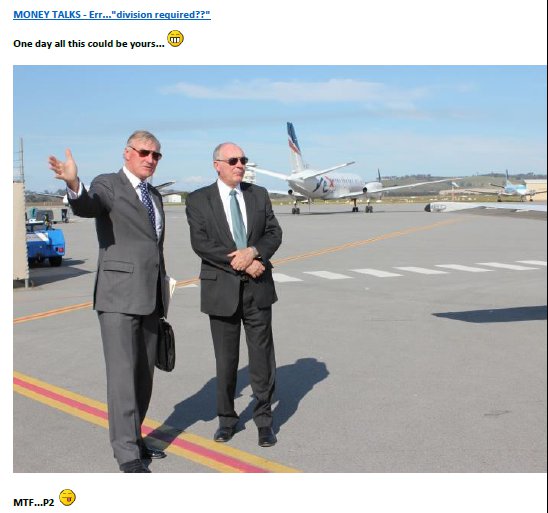 
Even to an admitted political dunderhead, such as myself, it seems passing strange that the National Party and Barnaby Joyce are not hauling on the Truss reins, screaming Whoa.  Almost everything connected with Rural and Regional affairs are a shambles.  From flood plain destruction to CSG through to aviation.  All of these matters impact on rural folk.

City folk may feel remote from ‘matters agricultural’, disconnected from the world of minor airports and unaware of the environmental havoc the proposed ‘development’ of secondary airports will have on their living condition and health.  They may notice when food prices rise and staples, such as bread becomes an imported product.  The cities cannot benefit from a reduced agricultural industry.

The PM does not need to be physically involved in any of this; just engaged.  There is a superlative RRAT committee, from which chapter and verse of ‘matters aeronautical’ may be obtained, this followed by a simple 15 minute sit down with DPM Truss to clear the air and establish a policy based on the Estimates committee advice would go a long, long way toward fixing the problems.

The Nats need to get a grip and patch up the gaping holes, Green and Independent candidates can and will exploit the aberrations Truss is leaving in his wake.  There is certainly enough ammunition to persuade even the most anti Barnaby party member to act, for the general good of the party; even if just to demand Truss pull his bloody finger out before their own seats are threatened or margins reduced.

The PM has available the inestimable Fawcett to turn to for advice and clear, succinct policy. There must be advice of similar quality available from other ‘informed’ party members.  It may just be that a Turnbull re-election depends of the good will of rural and regional folk.

The PM is astute enough to realise that the manner in which rural and regional aviation is being decimated represents the loss of a significant amount of revenue, employment and skills; which, once lost are gone forever.  This is not good business, not good politics and certainly not in the best interests of Australia.  Consider the effect of an ICAO downgrade of Australia’s aviation rating as a result of another failed FAA audit.  Can’t happen whispers the mandarins – Oh yes it can; Truss failed in 2008 to address the problems; Albo failed dismally to acknowledge that any problems existed; now we have Truss leading the race to the bottom, not just for aviation but rural and regional Australia.

No, we don’t need another political party – there are plenty of clever political animals lurking who will snap up an opportunity, exploit every weakness, capitalise on every error made now.   The Nats, through Truss have the most to loose, the bush is suffering.  One can only hope Barnaby has more ideas and is attuned to the very real problems facing those in rural and regional areas. – If there is a party left to lead that is.

The PM has the advice, the tools and all the toys needed to meet the demanded reforms, he also has enough horsepower to kick the Truss ass into gear – or, send him on his way.

Please PM, for the sake of morning spent discussing these matters you can assist an industry to make a significant contribution to the economy, the alternative is the loss of that revenue and longer dole queues, which is not good business or politics, now is it?

Aye well, best go and attend my radio active ducks and toxic Yabbies along the banks of the Georges river; that’s all Labor country ain’t it? Aint it strange?
As I fly around the country regions at all the country towns with empty unutilized airports, councils struggling to maintain them, they recognize their importance to their communities. A lot of those country towns had airservices, the intrepid old Fokker droning in each day, the smaller towns serviced by extensions to AOC’s that permitted GA operators to use to utilize small pistons to provide a “service” connecting these towns, sure not as safe perhaps as the bigger airlines but I have no doubt the locals were well aware of that, and the fact that flying was still far and away safer than jumping in their car.

There was a need and it was filled, often by local people who created employment and industry in those towns to support the service they provided.

The peoples choice has slowly been eroded by zealous over regulation that has increased costs to the point where any sort of air service is unaffordable and these country towns are very much poorer for that. All very sad, and really rather stupid. safety for safeties sake, ignoring the need and ignoring the people.

If the Government knew how to Budget & not take Our HomeLand & sell it to “look good on the books”, we’d have a chance.
We have yet to see a PM with the Integrity to take back his Country, listen to his people and have a bloody fair budget in place, not broken either.
It’s too easy to sell off. Quick money in the Govs account to look like we’re doing ok from the outside.

But inside, well, all we have to do is look at what is happening to our Australia. Particularly in the past decade.
Quick money at the time to have the books balanced.
Leave a mess that will last for decades, possibly irreversible now.
But as long as the out of touch Politician or Lap Dog, who “made” the rules has retired comfortably, with no conscious, sipping on their victims blood, then it seems to be forgotten and ok.

It’s not. On so many levels.

Here is your chance to lead Australia.
Take care of your people newby PM.

Listen and look. So plain to see through our eyes, thy ones who pay your wages and fund your retirement.

What about your eyes? Don’t believe all the whispers in your ear. Actually look at figures, prospects, history, damage control etc. Work with smart people, not the sneaky, self-indulgent type of smart. Too many of those have wore a path of the APH, for far too long.

My Head is down in sadness watching Australia slip away.