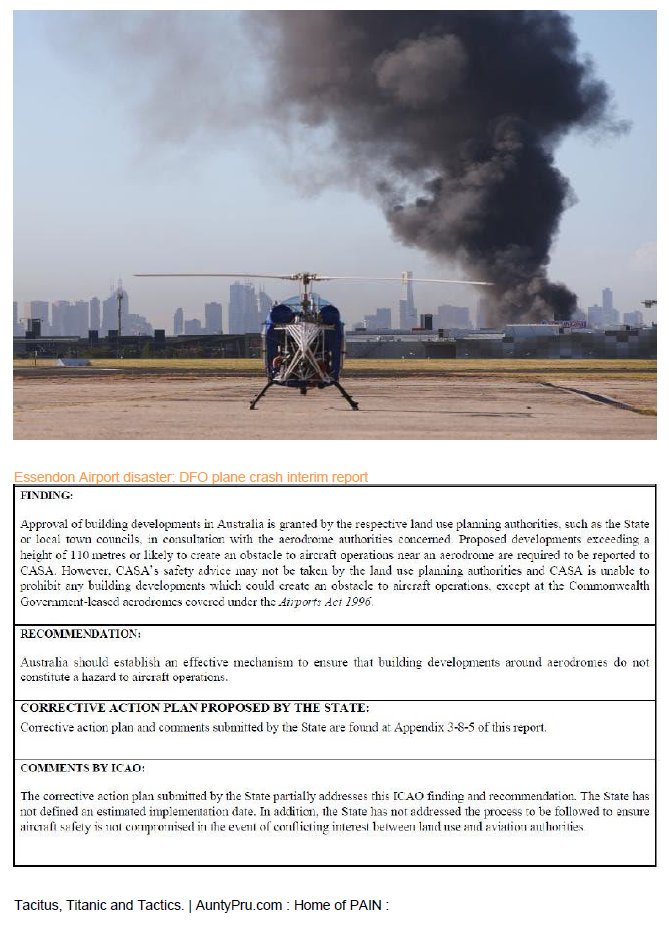 Speculation About the Cause of an Air Crash Yep, That’s a Good Thing

In what other area of journalism are reporters asked to surrender their own judgment and analysis and wait for the “officials” to weigh in?  From the very first air accident, the crash of the Wright Flyer that killed Thomas Selfridge in 1908, observers have opined about what the facts seem to suggest before and after the official probable cause is determined. And what’s wrong with that?

Today, the internet connects pundits, armchair investigators and hyperspecialists. This is how, in the hours after the crash of Lion Air 610, we first learned of the plane’s erratic climb and flight and reports that the Boeing 737 MAX had come out of maintenance immediately prior to the doomed flight. An army of folks with an interest in the subject and access to social media began filling the pool with data.

Reliable or something less, this stream of clues is a largely positive development. It is one of the most significant assists to air safety investigations in decades because it allows educated speculation and opens a path for folks whose expertise in earlier times might never have been heard.

Where oh where would our knowledge about the disappearance of Malaysia Flight 370 be if the only source of information was the Malaysian government?

In my book, The Crash Detectives, I devote an entire section to official investigations that were challenged through the perseverance of outsiders and journalists. They did not lap up the official story like a kitten being served a saucer of milk.

Had it not been for intrepid reporting the Arrow Air Flight that killed US military personnel in 1985 would still be thought of as an icing incident as the first Canadian investigation concluded. Air New Zealand Flight 901 which flew into Mt. Erebus might still be attributed to pilot error as the government investigation initially claimed. The airline’s coverup of its own culpability would have remained a secret.

The American National Transportation Safety Board took 4 years to get to a probable cause in TWA Flight 800 though evidence  within days of the crash on July 17, 1996 indicated an internal ignition of the fuel tank.

Following the 2017 crash of a BAe 146 in Colombia that killed a Brazilian soccer team, a quick search showed the plane’s range was two-thousand miles. The flight was 1,800 miles. It does not take Sherlock Holmes to report the possibility as I did for Forbes that fuel starvation may have been a factor.

It’s not sensible or desirable to tell journalists to hold off on reporting anything but what official investigators tell them. My job is to consider facts from many angles and many perspectives. Today’s communication landscape makes it possible to learn more than we ever could about the details of an accident providing information to a public yearning to understand what happpened. For investigators, however, what happened is only the first step, why it happened is the part that takes time.

A transparent and thorough investigation covered by an informed and skeptical press corps, fueled sometimes by contributors via social media, is the best way to respect victims of air accidents and assure that their deaths will lead to safer skies.

Absolutely spot on Christine so totally agree, the speculation fueled by the facts and evidence as it comes in also (I believe) forces the hand of the aviation safety bureaucracy and leads as you say to greater transparency and honesty.

Unfortunately in Australia (unlike the USA) we seem to have a tame and almost captured MSM that are seemingly blinded by what we call the mystique of aviation safety (MOAS). The classic example is the recent release of an ATSB report into the Essendon Airport DFO accident of B200 VH-ZFR which killed 5 people including 4 US citizens see here: https://www.atsb.gov.au/publications/investigation_reports/2017/aair/ao-2017-024/ …

In so many ways, the ATSB report into the Essendon accident is dangerously misleading. (MTF). The report skips past, with a very quick, light foot, one of the very important items, i.e. development alongside of runways. Hells bells – they almost herald the DFO as a life saver FDS.  The ATSB went to considerable lengths to parallel a ‘similar’ (‘cept it wasn’t) accident at Hayward (California) to our home grown variety. There are some rudimentary similarities; however, I digress.

The Estimates committee struggled with the concept of ‘Safety Zones’ and were, IMO, led astray by clever distraction to Runway End Zones, rather than ‘Safety Zones’. So; before the next committee outing, perhaps the Senators could find a trusted assistant to read through a thirty page document which will be of great assistance to future inquiry. The document – HERE – provides a fine exemplar of how grown up, sensible, responsible, rational people set about keeping their citizens safe from burning aircraft in their shopping centres, schools and hospitals.

The ATSB even had the mendacity to suggest that the aircraft hitting the DFO building may have actually saved lives, report reference:

…It was unlikely that the outlet centre had an influence on the severity of the accident. In the absence of the Retail Outlet Centre buildings, the aircraft’s trajectory would likely have resulted in the aircraft colliding with the Tullamarine freeway, east of the Bulla Road overpass. Dashboard camera footage provided to the ATSB indicated that there was a significant amount of traffic on the Tullamarine Freeway at the time, with potential for casualties on the ground…

Under ‘Other findings’ they also bizarrely speculated  that the building did not effect the severity of this accident. This speculation seemingly ignores the fact that had the DFO complex not been there the pilot would have had far more options for completing an emergency forced landing.

We strongly believe that in any mature ICAO aviation signatory State, like the US, the DFO building would not have received a building approval (at least not in it’s current form) eg: https://www.auntypru.com/forum/thread-37-post-9391.html#pid9391 …

Quote from the ATSB report:

…The reasons for the OLS breaches were complex and related to the airport operator’s obligation to establish an OLS in accordance with applicable standards and CASA advice to, and oversight of, the airport operator. It is beyond the scope of this investigation to adequately examine the issues found with the outlet centre building approval processes. Consequently, the ATSB has initiated a separate investigation, AI-2018-010. That investigation will examine the building approval process from an aviation safety perspective, including any airspace issues associated with the development, to determine the transport safety impact of the development on aviation operations at Essendon Airport…

Although the ATSB is examining the Bulla Rd building approval in a ‘separate’ investigation, we all know that this is really code for we will obfuscate this until the MSM and public have forgotten. After all it was only 5 years ago that the ATSB started a very similar investigation into building/obstacle approvals around the same airport. This investigation report was completed in May this year? see https://www.auntypru.com/forum/thread-30-post-9476.html#pid9476 … & https://avlaw.com.au/atsb-report-no-safety-management/ … & https://www.atsb.gov.au/media/5774258/ai-2013-102-final.pdf …

Although it took nearly 5 years to complete (ref: https://www.atsb.gov.au/publications/inv…-2013-102/ ) the ATSB did manage to identify a significant hole in the cheese:

The Department of Infrastructure, Regional Development and Cities adopted a prescriptive approach to the Hume City Council building application within the obstacle limitation area of Essendon Airport, which was in accordance with the process prescribed under the Airports (Protection of Airspace) Regulations 1996, but did not require the application of risk management principles to the department’s consideration.

The question there is when was this significant safety issue 1st identified? Another question is – why wasn’t the 2013 investigation and final report referred to in either the YMEN DFO accident final report; or in the (AI-2018-010) above summary??

However there was no mention of this report whatsoever in the ATSB YMEN DFO accident FR. In our opinion this suggests that the ATSB is once again (like with MH370 and PelAir etc..etc) providing topcover for the Govt, the Dept and their aviation safety agencies. Remember that this safety issue (ie inappropriate approved building development around airports) was 1st identified by ICAO in the 2008 USOAP audit of Australia: 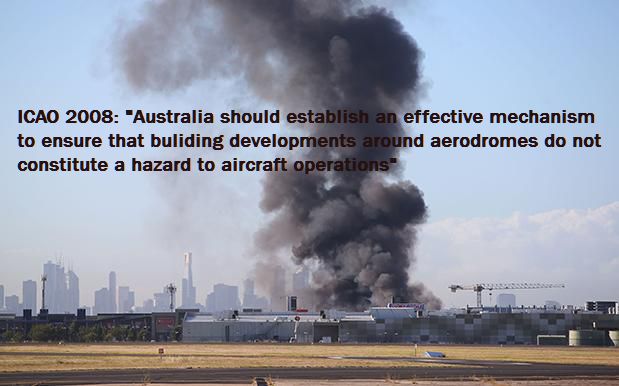 … and again re-identified in the 2017 ICAO audit conducted over 1 year ago: 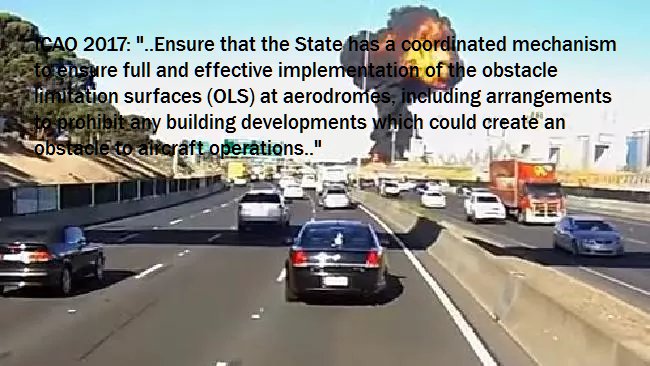 And that is no speculation at ALL! – Cheers P2.