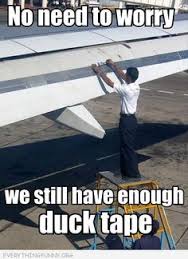 I hope this finds you well and as happy as it’s possible to be, given the recent bout of headaches.  Things here have not improved since your last visit; in fact, things are going to hell in a hand cart a fairly rapid pace.  As requested, we have been maintaining our watching brief on matters aeronautical.  Now, we realise you are busy and our brief was only to send a smoke signal when things got desperate; if you look at the attached image, that large cloud of thick, black smoke over Cantberra is not a bush fire.  It is however a funeral pyre made from remnants of a once proud, vibrant industry.

The gaping, dangerous holes you discovered in previous visits were, as you know, repaired by Botchit and Leggitt who took an inordinate amount of time and money to paste some new wallpaper up over the cracks, gaps and holes.  As you are aware, those measures were supposed to be temporary repairs to hide the mess, while the damage was repaired from behind, so the public would not be alarmed at the unsightly mess.  Well, B&L never returned, the site behind the ‘paper-wall’ as it’s called remains and has been used as an Iron Ring rubbish tip for good initiative, reform and integrity.  It’s a stinking mess.

GD, myself and a couple of others slipped into the basement recently to see what was what and to examine some of the items dumped down there.  Near the worst part of the damage, we found a couple of particularly battered ‘books’, manuals we thought.  Both soggy and filthy.  Both showed signs of being crapped on, from altitude and repeatedly pissed on.  We cleaned them up as best we may to discover they were previous ICAO and a FAA audits.  This solved one mystery, for we have often wondered what became of them.

In what we called the ‘maintenance section’ we found a newly dumped Safety Recommendation; from an ATSB report – HERE – the implications are deep and troubling.  Someone, somewhere should be in trouble.  In short, it’s the old story confirming that by using the Australian system for checking if a part is ‘genuine’ it can be demonstrated that a house brick is a fuel pump; don’t laugh; it’s been done before.  So another failed safety system is exposed and dumped in the basement along with the other ‘stuff’.  The fact that this ‘oversight’ caused a couple of deaths just don’t seem to disturb the paper hangers working on the showy, shiny outside wall.

One of the more recent arrivals which will interest you – LINK – relates to maintenance, it was in bundle with a thing called ‘a disallowance motion’ on regulation 145 from no less than the parliament.  Seems that despite Australia’s superb new maintenance suite, the rest of the world just can’t seem to catch up and fail to understand the vision splendid.  How the rest of the world can be so blind and so petty as not accept our standards is beyond the Casamite tribe.  They seem to believe that America, by not accepting the wonderful new system as compatible with previous agreements are just jealous; peeved because they didn’t do it first.  It’s a bit like an African dictator threatening to remove the Queen’s image from his stamps, her response was to remove his image from the marmalade jars (old joke that, and not very PC, forbearance; it serves a higher purpose today).  What will happen when treaty and agreements are cancelled, world wide we cannot say.

Hidden in a deep dark recess was a thing called the Forsyth review; this document had really taken a hammering.  Every page plastered in filth and covered with some of the rudest remarks I’ve ever seen.  Remarks that even made GD blush- and that, friends and neighbours, is no easy task I can assure you.

We stood there in the gloom, the space lit only by the lamps on our safety helmets, gloves putrid and some kind of slimy ooze sticking to boots and clothing; filthy.  It was GD who said it for us “if the industry health department ever gets to see what has been hidden in here, disguised as a worm farm, there’ll be more than a few cancelled treaties to worry about”.  It’s going to take a year to clean this out before repairs on the papered over cracks can even start”.

Anyway, enough of our small problems, if you could possibly spare one of your clean up crews for a short while, just to open a tunnel into the basement so we can get some equipment in, we can manage the clean up from there; but someone needs to make a clean start.  Let me know if you can spare a crew.