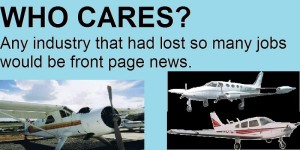 Minister for Infrastructure and Transport Darren Chester today announced a major study will be undertaken to identify priorities for General Aviation (GA) in the future…blahblahblah.&.bollocks

Here is the ToR written for Chester courtesy of Murky Mandarin & his minions:

The study will involve both a quantitative analysis of available statistical data on GA activity as well as a qualitative analysis of information provided by industry and Government agency participants, and other relevant sources.

This information will include consultation with key industry participants in addition to the existing annual Bureau of Infrastructure, Transport and Regional Economics—General Aviation Activity Survey.

The Terms of Reference for the study are to:

And here is a general summary and commentary so far off Chester’s AP thread & via Binger at the Oz:

Obfuscation rule 101: When you really don’t want to do anything but still want to look good in front of the cameras and be seen to be politically proactive, what do you do? – Call a review – FDS!

‘K’; “It’s an open secret that DDDD is going to release a ‘statement’ tomorrow;”

Will Chester write his own media release, or will the kiddies in PMC write it for him? Guess we know the answer to that.

Can’t wait to compare Creepy’s and Bingers analysis of this exciting announcement! Something tells me it will be chalk and cheese.

DDDD -“I am keen to remove barriers to growth in this vital part of the aviation industry, including reducing costs and regulatory burden,” Mr Chester said.

“General aviation has a rich history in Australia and I’m confident it can have a prosperous future. This study will help get the public policy right to support growth in the sector.”

– Hmmm…why does that sound so familiar –

Who was it that once said – “..In doing this, I acknowledge the concerns being expressed by some sectors of the aviation industry, in particular general and regional aviation, about the costs of regulatory compliance and how outcomes of the current aviation safety regulatory reform programme compare with regulatory approaches in other countries..”

Release of the Report of the Aviation Safety Regulation Review

On 3 June 2014, the former Deputy Prime Minister released the Report of the Aviation Safety Regulation Review.

Welcome back Minister, now let’s get on with it!

The Australian Aviation Associations Forum has welcomed Infrastructure and Transport Minister Darren Chester on his reappointment to what he  describes as “this critical ministerial position for Australia’s economy, job creation and the aviation industry.”

But the TAAAF’s welcome comes with a continued push for the Minister to steer back onto the course mapped out by the Forsyth Review’s 37 recommendations.

All TAAAF members are urging the Minister, “as a matter of priority, to issue a strong Statement of Expectations to CASA to specifically reinforce the primacy of the CASA Board.

“Forum participants highlight the value of creating a new partnership with industry, as outlined in the Forum 2016 aviation policy and continue to be disappointed with the lack of action in critical areas from CASA.

“The Forum expresses frustration at the disarray of the regulatory system, with new regulations likely to continue to remove jobs and opportunities from the industry through increased costs for no safety outcome.

“The Forum calls on the Minister to direct the CASA Board to establish a small joint industry action taskforce to fix clearly identified problems.

“The Forum identifies significant cultural change and systemic issues that are still not being corrected and which require immediate attention by the CASA Board.

“In particular, the Forum expresses continuing concern with the lack of progress in the genuine implementation of the previously-agreed Forsyth recommendations and would welcome the re-engagement of Mr David Forsyth to conduct a review and public report on actual outcomes to date.

“In addition, there remain many outstanding issues of concern that are yet to be resolved including:

“The TAAAF Aviation Policy 2016 provides a wide range of appropriate expert advice on aviation issues and the TAAAF participants recommend the policies to the Government for further consultation and implementation.”

Another of the review’s observations was that:

While CASA appears to be trusted by many in government, the industry’s trust in CASA is failing, compromising CASA’s Stewardship, and industry perceives CASA’s Accountability as being compromised. (The Panel’s highlighting.)

Forum members contacted by ProAviation are still scanning the horizon for any initiative that will begin to restore the trust they believe has now been progressively squandered for more than a quarter of a century.

Now the miniscule might think his statement today is addressing the above TAAAF concerns but it is quite obvious that this is yet another stalling tactic by the bureaucracy.

Murky and his minions are still trying to argue the toss that the ASRR is one opinion.

Ironically that one opinion just so happens to reflect the opinion of the biggest collective group of industry participants (i.e. TAAAF).

It is my understanding that AOPA is now included as an active TAAAF member, so why is the miniscule apparently now trying to drive a wedge between different sectors of the industry i.e. General Aviation – GA vs rest of industry??

IMO the term “GA” is doing the industry a huge disservice. They don’t call other transport sectors ‘General Trucking’ or ‘General Marine’; so why do they differentiate with aviation? It is small to medium aviation businesses and/or airlines, MROs, Flying schools, AOC holders, private & recreational pilot/owners and aviation/aerospace manufacturing – FDS!

People like ‘Darren the beautiful’ and his predecessors are a huge contributing factor to the current untenable issues smashing GA, and not just GA but also other sectors as a direct result of the core GA decline;

You know it is interesting – our successive Governments are happy to piss away hundreds of billions of dollars on submarines, Defence, overseas wars that we shouldn’t be a part of, yet what do they do for Australian aviation? Obsfucation, deflection, bankrupting businesses and not financial supporting the industry. For example;
-Where are the business tax breaks?
– Where are the incentives?
– Where are the government financial grants?
– Where are the payroll tax breaks?
– Where are the subsidised regional routes?
– Where are the financial inputs from Government? They announce these bogus infrastructure funding program’s yet they give you 30 days to come up with a ‘shovel ready’ application for a $20m project!! Absolute bullshit. They purposefully set the bar at ‘unachievable’. They make out they are good guys by announcing a big bucket of money for everyone to use but the reality is that you don’t have enough time, and the government then retains the money it announced! Yet another smoke and mirrors trick to fool the voter.

Anyhoo, Chester’s pony pooh announcement is just another load of bollocks obviously brought on by sections of the IOS turning up the heat on an inept Government.

TICK TOCK Dazza. ‘The time at the third stroke is 2358 precisely’……

Sandy Reith Wrote: Do my eyes deceive me? Can you believe it? They must be joking, another rubbish review? Flabergastered.

This is a quote, in regard to the decline of general aviation, purporting to emanate from your Department, regarding an attempt to apply CPR to grass roots aviation or General Aviation or perhaps better described as DAA, Decimated Aviation Australia.

“Infrastructure and Transport Minister Darren Chester will announce the review, which will be conducted by the Bureau of Infrastructure, Transport and Regional Economics.”

Minister, have you any idea of how many make work reviews, papers, task forces, consultations together with industry, meetings along with BITRE and DoTI and CASA and involving ASA and ATSB have we been witness to in the last ten years? Let alone the last thirty years? Let alone the umpteen millions of wasted words and billions of wasted lost opportunities and taxpayer dollars?

What do you intend to do about the many glaring and still outstanding instances of sheer injustice perpetrated by your aviation Corporation?

What do you intend about the ASRR recommendations?

Aviation interested ladies and gentlemen of Australia, we must end this complete farce. Missionary zeal is required, and we need that really big meeting in Sydney that was mooted by AOPA. Can TAAAF, with AOPA and AMROBA et al, together make this happen? Without a large and visible public profile our small gains, if any, will be subsumed in the normal bureaucratic manner, the manner that we are so familiar with during the last thirty years.

Without our MPs getting the message that the public are behind us, without generating media profile we will continue to be fed with codswallop. No amount of ranting, wringing of hands, bluster, throwing insults or preaching to the converted will make one iota of difference. Also may I suggest do not waste time talking to bureaucrats, we simply play their game.

Time for action on the national public and political stage.

IMO Sandy nails it, well passed time hoping NFI ministers, like DDDD Chester, are going to provide some sort of magic pill that will resurrect the industry decline. Time for industry to sing out loud and long; embarrassing the government at every possible opportunity; and in combined unified numbers; and through every MSM & social media outlet – enough is enough…

No doubt there will be much MTF…P2