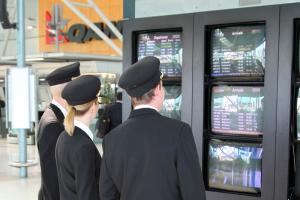 The following quotes/excerpts are taken from the AIPA submission 8 to the Pel-Air cover-up Senate Inquiry.  A submission I might add that is well worth taking the time to read in it’s entirety

First this on the standards of the ATSB reports:

From bottom of page 8: …In 2011, we raised our concerns in our Supplementary Submission to this Committee during the Inquiry into Pilot Training and Airline Safety including consideration of the Transport Safety Investigation Amendment (Incident Reports) Bill 2010 in this way:

“Are ATSB Reports serving their intended safety purpose or are they too late and too superficial to be anything other than records of bureaucratic activity?
AIPA is of the view that recent major reports are not serving their safety improvement purpose due to a lack of depth, particularly in regard to HF, and a lack of timeliness. We believe that, without the technical and HF insight that is required for complete understanding of complex failures, it is difficult to defend against an inaccurately or inadequately described problem.

Similarly, if nobody really remembers the problem or they think it has already been solved before a report is issued several years after the event, then the report has lost its value (other than a record of activity). The roadblocks to timely publication must be eliminated.

AIPA believes that there needs to be a formal system for multilateral industry assistance to the ATSB to supplement its resources, particularly in regard to specialist operational and technical knowledge.”16

It is through that prism that AIPA provides its comments….

Then on the ATSB BASR approach to identified safety issues & safety recommendations: 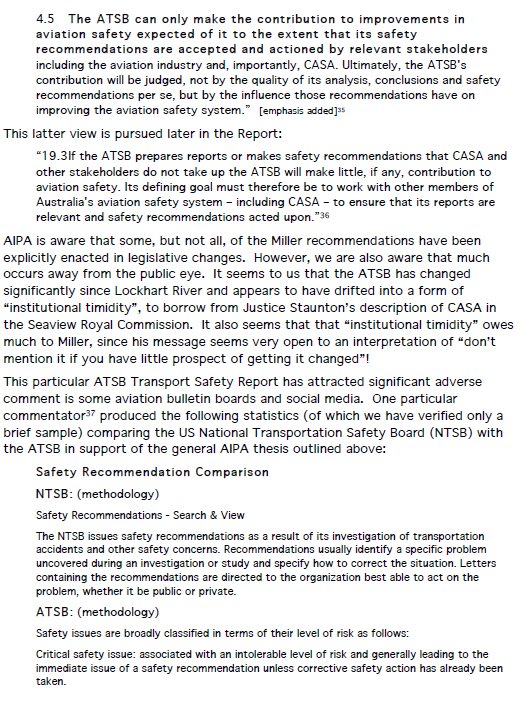 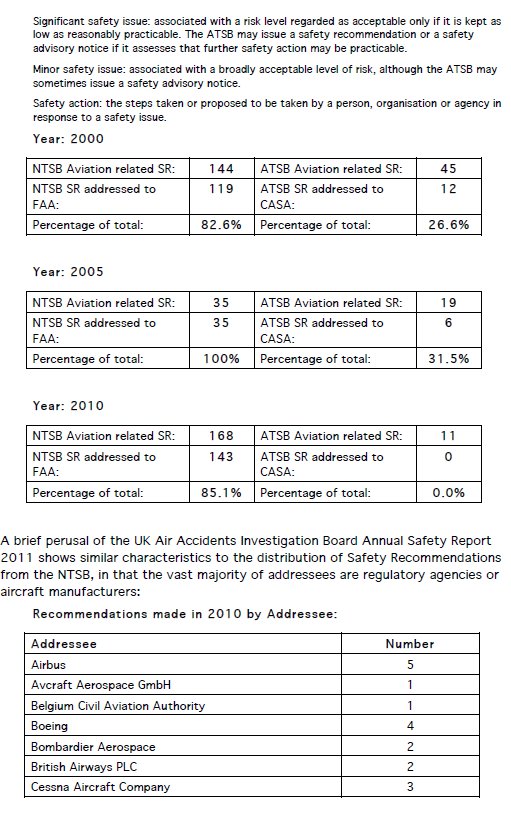 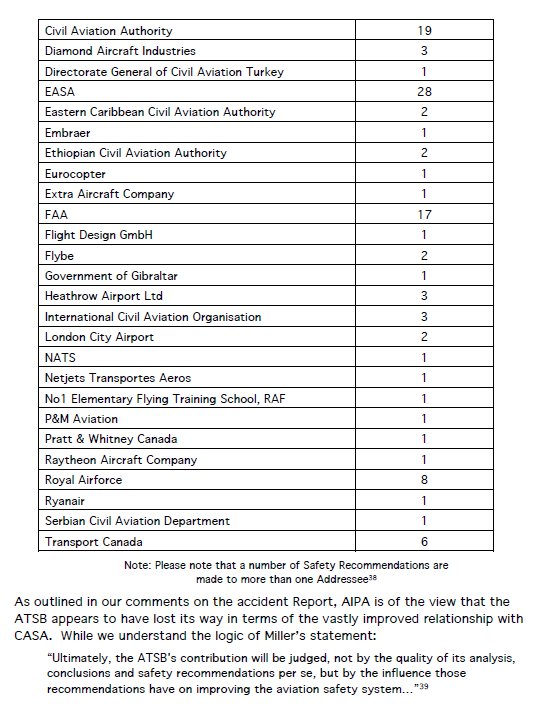 Finally the following quote from AIPA’s ASRR submission perhaps highlights the view of many of Qantas pilot’s (at least) in regards to having & maintaining a fully independent State AAI:

AIPA’s submission specifically questioned whether CASA’s role in the aviation system was
being adequately scrutinised, but the harsh reality is that the same question could be asked in relation to any of the agencies directly or indirectly influencing aviation safety.

AIPA believes that the ATSB has a very clear duty under the TSIA to independently and
holistically examine the aviation safety system. Pandering to the ego or behaviour of any
stakeholder is anathema to the principles under which the ATSB was established and AIPA strongly believes that the safety message should never be lost in the telling. We strongly support the notion of the ATSB as the watchdog of agency influence on aviation safety.

AIPA recommends that the Minister for Infrastructure and Regional Development issue a directive to the ATSB clarifying that paragraphs 12AA(1)(b) and © of the Transport Safety Investigation Act 2003 require holistic examination of the aviation safety system, including the regulatory framework, and that cooperation and consultation with stakeholders must not be permitted to compromise the independence of the ATSB or the making of safety recommendations.

Nonetheless, AIPA recognises two important factors: first, the current generation of senior ATSB managers may find it difficult to step out of Miller’s shadow; and second, the ATSB is not and never should be a routine auditor of the aviation safety system. AIPA believes that the latter function requires a Machinery of Government change to redress a number of aviation safety governance issues. We will elaborate on that proposal later in this submission. 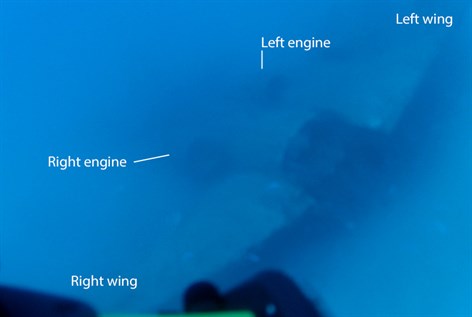 The following is a link for the PAIN research & opinion piece – Opinion :-ATSB since 2003. In the course of the Senate AAI Inquiry this paper was submitted to the RRAT References Committee for their review.

The part to which AIPA reference in their submission 8 to the Committee is on pages 4 & 5.

Also relevant to the discussion is PAIN supplementary submission (click on title) – NGA_Senate_Supplement.pdf – to which Chapter 7 is of particular relevance.