A little chicken; or chicken little. 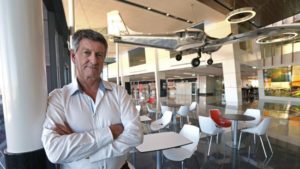 Quote:Would this be the same Dick Smith who quite recently recommended to the GA community ………’ Get out while you still can”.

Dick Smith, when people get out of GA the need for goods and services will of course decline. Why are you surprised when you find yourself in this position? (Too few suppliers and no price competition). For mine, you’re unmistakably playing a part in the contraction of the GA industry.

How’s about a little less observation and more activism. I understand you’re supportive of AOPA’s president Marc de Stoop and his approach to the GA issues. I would suggest you counsel him to put a hold on his Project Eureka, get that disaster of a website modernized, attractive to prospective new members and CURRENT (GAAP airports news… really???), put a target on new annual membership growth and gain a critical mass of aviation people that will mean real influence. (After over a year into the role Marc finally acknowledges, to some degree at least, the massive difference between AOPA USA and Australia’s AOPA, and the significantly disproportionately low membership here).

The post above, cribbed from UP is a valid argument; across the board, one I can support.  Dick achieved more benefit to and did more good for the GA cause during his ‘chats’ with Macca on ABC radio than he ever managed when he was ‘in office’.  A simple clear message folk could understand and relate to.  That easily forgotten empathy could/should have been reinforced by more of the same and I feel certain that other ‘celebrity’ commentators, such as Alan Jones (sorry, don’t know of many others) would be pleased to give Dick a little air time – in a good cause.

Then; the ‘fireside’ chat with the Senate committee.  That was IMO a milestone; they were ‘on-side’ still reeling from the discoveries made during the Pel-Air inquiry, pissed off that their recommendations went onto the ’only an opinion’ pile and were starting to realise that the work of the good Rev. Forsyth was heading to the same pile.  What an audience, what a great place to get the point made to influential folk who can (could), in a heartbeat, set the winds of change (real change) in motion.

Dick may, or may not, depending on your own inclination, have done much for GA; but, for me at least all was forgiven after the events above.  I’m not sure, in fact I don’t know why Dick stopped banging those drums and switched to the ‘the sky is falling’ story line.  But the industry needs Dick out on the hustings, particularly now with the imminent election and the sensitivity politicians seem to develop during this period.

Which takes us to De Stoop and his AOPA push for sanity.  Met the man, had a coffee, liked him and he is no ones fool; not by a long shot.  I get the impression that he is learning ‘on the job’, learning fast; and counts Tamworth as work experience.  I believe it will be worth watching AOPA grow back to what it should be; and it will, make no mistake.  The ‘Prez’ as P2 dubbed him, is formulating a way forward for his small outfit which, IMO is the right path.  The group is currently trapped between a rock and a hard place, mostly due to the past but also due to the uncertainty of the future.  Performance generates credibility. Credibility generates membership; alliances provide support. A simple clearly defined message – ala ‘Dick’ could just, with a little luck and a big, united push help repair the incredible damage and carnage the CASA have inflicted or enforced on an industry.

Forget for moment it’s Dick Smith, think on the benefits he brings and do all you can to get him back on hustings, doing what he does so very well – selling the story.  Forget it’s AOPA for a moment and consider what benefits may gained by having another well informed, internationally recognised and supported lobby group, joining in with the excellent TAAAF and the associated groups.

This is not a time to be worrying at old bones; the GA sector is all but moribund.  Lets get it back to being a going concern before we start grinding rusty axes and begin the inevitable in-fighting.  There’ll be little left to squabble over if the wolfs get past the flimsy, rotting gates.

Anyway; that’s my two bob’s worth; I reckon Nulli earned a choc fog for a well aimed dart.