“A lie that is half-truth is the darkest of all lies.” 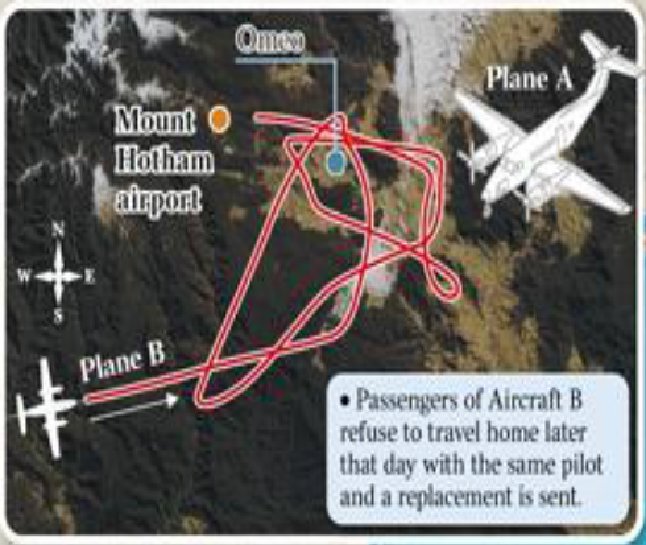 “Good morning; welcome to Grabbit, Duckout and Leggit Insurance, my name is Connie, how may I help you?.

Connie: “Oh we can do that for you Madam, as well as the garden, the fences, swings and sandpit at a very reasonable rate. Just a few details and I’ll get you a very competitive quote. Now, to begin, where do you live?

Connie: Oh: (short pause) Hmm, just looking at Google Earth here to locate your property, seems you back onto what used to be the end of the long runway; which was shortened to allow a council supported development.

Mrs. W: Yes, that’s the one, we got a terrific deal on the place and we were assured by the developer that if we purchased the cyclone fence it would prevent aircraft hitting the house, which means that the back garden may get a little ruffled in a one in a million over run. But I worry for my collection of beautiful gnomes.

Connie: Well, we can actually write a policy to cover that eventuality; but it is going to be very expensive, you may need to take a second mortgage to cover the premium. Let me explain; lets say the impossible happens and an aircraft does plough into your garden, we will of course compensate you for the value of the used gnomes; but to recover that money, we need to be able to sue someone. The developer can’t be touched and they are a very tough nut to crack, so we leave them alone. None of the government aviation safety agencies can be held responsible for the accident, that has been demonstrated many times.  Anyway, by the time we get them into a court, we’ll all be pushing up Daisy’s. But we must be able to see a way to recover the compensation paid to you.

Mrs. W: Oh, I see: but I must protect my award winning gnome collection, what can we do?

Connie: Well our only option is to sue the property owner for being stupid enough to buy a property in a very high risk area, who expects a cyclone fence to stop five ton of aircraft, two ton of jet fuel doing 200 KpH as it hits the garden fence. You’d have more chance of coverage for a place on the edge of a war zone. Now bugger off and stop wasting my time. Click – Burrrrr.

The twiddle above is not too far fetched. Anyone who watched the last Senate Estimates will completely understand. Four government departments, Infrastructure, ASA, DoIT and CASA all wriggled and squirmed to prove, categorically that the ‘buck’ does not stop in their department. (ATSB a no show, but that’s their real role). There is no concern for the safety of the public who live, shop, work and play in areas which have encroached on existing airport safety buffers. There is no concern for the safety of the aircraft and passengers who are being forced to operate with less than optimum safety buffers. The whole situation is a lottery and someone has to win the grand prize. A fireball departure and a ride to the morgue.

For those concerned about living to close to an active aerodrome the following video clip outs may give you an indication of just who is taking care of your lives, property and public safety. Make of them what you will.

There is a glimmer of hope; only a whisper based on a supposition, gleaned from intuition. There is a ‘feeling’ that the very competent, bipartisan, well informed Senators on the Estimates committee know the answers to the questions they ask and have had just about enough of the ‘aviation safety agencies’ antics and need very little more to trigger a serious ‘inquiry’. Only whimsy at the moment, perhaps the long awaited Pel-Air report will be ‘the’ final straw.

Who knows, apart from the gods and they know full well that something has to be done before the smoke and flames bring everlasting shame, to those who sat and prevaricated. What say you minister? Remember legal responsibility may not be a factor in your ambit; but who will the public start looking at when another aircraft explodes in a crowded building. The DDDD shopping experience in glorious technicolour.

That’s it – second coffee outdoors, in fresh air, as far from the computer as I can get.