“Irony is wasted on the stupid” 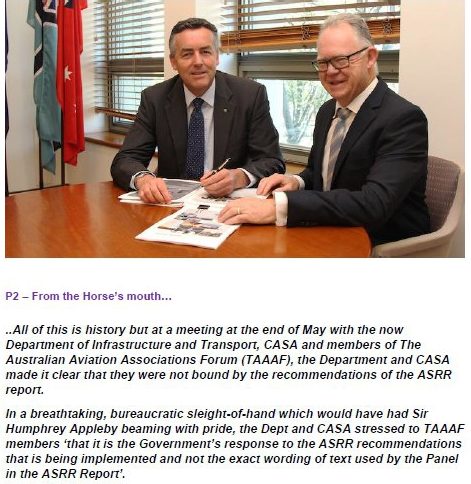 Oscar Wilde once said “Irony is wasted on the stupid”. But the ‘irony’ of the present situation is too delicious to let it slide away, unnoticed.  To really ‘get it’ you must first read the ‘Winter newsletter’ from the RAAA – and the latest from AMROBA. Cannane and Davis in full flow, canny, logical, astute and undeniably correct. These inestimable gentlemen represent many organisations which are ‘compliant’ with not only the rules, but the edicts and policy (whims) of the ‘regulator’. Compliance is a big deal; non compliance a death sentence. Even a minor infraction can lead to all manner of expensive trouble – if CASA decides to make it so.  Compliance has become an almost manic obsession on both sides of the line, vast amounts of time, money and effort are invested by industry to ensure that not only are they ‘compliant’ but seen to be compliant; indeed ‘compliance’ has become a small industry in itself.

In short, in a highly ‘compliant’ industry – the “R” regulator is not only ‘non-compliant’ but spends a great deal of time, effort and money appearing to be compliant, while doing exactly as pleases them best.  There are now three fairly serious triggers to launch an investigation and report under the new State Safety Program (SSP). Australia signed up for this as an ICAO ‘compliant’ state; the ASA situation is (IMO) serious; the false radio traffic situation has the potential to be lethal; on a smaller, but no less important scale, controls for the UAV increase have been neglected. But you watch and see what CASA do about any of these things and their obligations to comply with the SSP. As an act of kindness, I’ll not take your bets, keep your money for a rainy day.

“In Paris they just simply opened their eyes and stared when we spoke to them in French! We never did succeed in making those idiots understand their own language.” Mark Twain. Aye, Australia is compliant – 3000 differences with ICAO prove the pudding. ..All of this is history but at a meeting at the end of May with the now Department of Infrastructure and Transport, CASA and members of The Australian Aviation Associations Forum (TAAAF), the Department and CASA made it clear that they were not bound by the recommendations of the ASRR report.

In a breathtaking, bureaucratic sleight-of-hand which would have had Sir Humphrey Appleby beaming with pride, the Dept and CASA stressed to TAAAF members ‘that it is the Government’s response to the ASRR recommendations that is being implemented and not the exact wording of text used by the Panel in the ASRR Report’.

In other words there is no intention from Government of being guided by the ASRR report itself or of seeking to satisfy the intent of the Report’s recommendations.

The Department also said that any review of the ASRR report implementation would take place after it was completed and would be carried out by an independent person, being not any of the original members of the ASRR panel.

So we get some more dots confirmed on the sorry ASRR timeline of embuggerance ..UDB? – No; pretty much business as usual for Murky, Comardy and his CAsA-phyte muppets …